By Zhao Jinzhao and Sha Sha 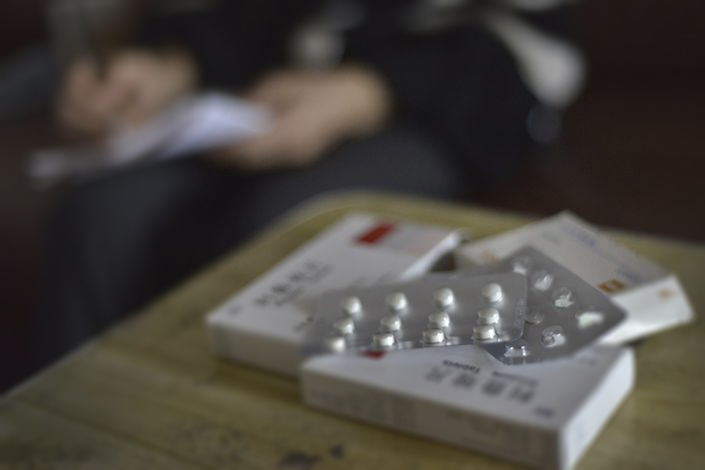 Even after a rare disease is identified, doctors may feel helpless because the drugs their patients need may not be available in China. Photo: VCG

The latest shipment of the medicine, which Xu had been buying through purchasing agents since her daughter was born, turned out to be fake.

Phony pharmaceuticals are just one of the problems that patients and their relatives face trying to get their hands on medicine for treating rare diseases in China.

Many of these drugs are cheap and readily available outside of China, but lagging regulations and the cold logic of the market economy has made them difficult to come by inside the country.

The situation has forced people like Xu to turn to an unreliable network of sometimes untrustworthy purchasing agents to buy overseas drugs that they or their loved ones need to lead normal lives.

The government has made strides in addressing the problem. With the release of the First National Catalog of Rare Diseases and the implementation of drug approval policies, China’s central and local governments in recent years have started looking for ways to better support patients with rare diseases.

As of Oct. 1, 74 of the 121 rare diseases listed in the First National Catalog of Rare Diseases were treatable across the country, and 66 types of medication for treating 35 rare disease symptoms were available on the market.

“As rare disease patients, we are fortunate in one sense, but unfortunate in another,” Xu said, noting that little attention has been paid to the drugs used in treating her daughter’s condition. “Producers and manufacturers are focused on first aid or high-priced drugs.”

A drug that’s been ignored

Xu’s daughter suffers from congenital adrenal hyperplasia (CAH), a category of rare genetic disorders that can cause stunted growth, fertility problems and in rare cases, death. Hydrocortisone is one of the drugs used to treat CAH.

The annual incidence of classical CAH in newborns ranges from 1 in 10,000 to 1 in 20,000, according to data gathered from China and overseas shows. The most common form of CAH is 21-hydroxylase deficiency, which accounts for 90% to 95% of CAH cases.

The standard drug regimen for 21-hydroxylase deficiency includes the use of glucocorticoid, with hydrocortisone being the preferred choice.

CAH requires lifelong treatment, and its effectiveness depends on a number of factors, such as the severity of the disease, the time when the treatment is started, and the patient’s compliance with medication. Endocrinologists say that prompt and effective treatment can help patients achieve normal growth and fertility. Because the drugs to treat this disease are cheap, CAH patients who are treated in a timely and standardized way do not have to worry about heavy medical expenses that patients with other rare diseases often face.

However, the problem is that the dosage of drugs suitable for children is not available in the domestic market and affected individuals have to procure the medicine from overseas.

The most common type of 21-hydroxylase deficiency tops China’s list of rare diseases, and the Guidelines for the Diagnosis and Treatment of Rare Diseases issued by the National Health Commission in 2019 explicitly recommends inexpensive therapies.

“It’s regrettable that home-made hydrocortisone is only available in the form of 20 milligram tablets. The daily dosage for infants is 5 milligrams or even lower.

This drug is insoluble in water and needs to be taken several times,” an endocrinologist at a well-known hospital said, noting that parents do everything in their power to deal with the problem. They grind the medicine up, mix it with flour, add water and then give to the children in amounts measured in milliliters with the help of analytical balance, a piece of equipment designed for very precise measurements.

However, it is still difficult to accurately control the dosage. A reduced dosage would mean reduced efficacy and an excessive amount would produce side effects, said Luo Feihong, chief physician at the Department of Endocrinology, Genetics and Metabolism of the Children’s Hospital of Fudan University.

An insufficient dosage can stunt bone growth, while excessive amounts can lead to obesity. Once weight is gained, the dosage needs to be increased. The higher the dose, the more corpulent the patient becomes and vice versa. It can become a vicious circle. To deal with the dosage problem, CAH patients often have to purchase 10 milligrams and 5 milligram tablets produced overseas through various channels.

is not available in the Chinese market. In addition to being used to treat CAH, hydrocortisone and fludrocortisone are also essential medicines for treating other conditions. Fludrocortisone is also used in a recommended test for diagnosing secondary hypertension.

“Without drugs, we can’t do these diagnostic tests, which adversely affects treatment,” said the endocrinologist at the well-known hospital.

In the absence of drugs, patients are left with only one alternative, i.e., eating an additional 1-3 grams of salt daily at the initial stages, which then exceeds the normal amount of daily salt intake for children, and creates risks to the kidney and heart.

Despite the government’s introduction of favorable policies, “the drugs that should be given precedence are often ignored,” said Feng Wenhua, a researcher at the Institute of Materia Medica at the Chinese Academy of Medical Sciences and Peking Union Medical College.

When it comes to rare diseases, there are only a few pharmaceutical factories in China producing drugs like hydrocortisone that have already proven to be effective overseas. According to the information provided by some doctors, there are at least four or five rare disease drugs that are urgently needed in endocrinological clinics, such as the second-generation drug cabergoline for treating noncancerous tumors of the pituitary gland.

In 2015, Zhou Beihua, director of the Special Treatment Center of the Children’s Hospital of Fudan University and a member of the Shanghai Municipal Chinese People’s Political Consultative Conference, together with four other members, proposed that authorities give special approval to some foreign-produced drugs, including hydrocortisone, so that children suffering from rare diseases can be treated more easily.

She mentioned in her proposal that it is impossible for overseas pharmaceutical companies to enter China for production and sales due to the small number of patients and the low demand. Patients have to buy the drugs overseas or ask someone to buy it for them. The drug supply is unstable, which causes interruptions in the treatment. What’s more, it may potentially break the law and lead to unintended consequences.

“Why do we have to repeatedly call for alleviating the shortage of such drugs? Because CAH has long been included in the neonatal screening program in developed countries in Europe and North America. Neonatal CAH screening was first carried out in Shanghai in 1988 and then in Beijing at the end of 2018. But up to now, most provinces and cities in China haven’t started doing it extensively. The screening, diagnosis and treatment of CAH in children is lagging behind, which may lead to delays in diagnosis. Because it is a rare disease, children, except those in big cities, often receive substandard treatment, and the curative effects are unsatisfactory,” the endocrinologist said.

And even after the disease is identified, doctors may feel helpless because the drugs they need may not be available in China. Zhou and others mentioned in their proposal that even if doctors know the manufacturer and where to buy the drugs, the medicine they get through purchasing agents is outside the scope of their work and they might end up accused of having a profit motive in doing so. Drugs without import approval numbers were regarded as fake drugs under the regulations until December 2019, even if they were already widely used in overseas markets.

The Drug Administration Law, which came into effect on Dec. 1, 2019, revised the definition of fake drugs and inferior drugs, and revoked the provision that “drugs imported without approval should be treated as fake drugs.”

Xu has a background in medical science. After educating herself and talking repeatedly with doctors since the birth of her child, she has gradually come to believe that “CAH is not a severe disease and will not shorten the life span or affect the normal life of a child.”

She is hopeful about her child’s future.

Xu Kai is a pseudonym used to protect the privacy of the source in this story.