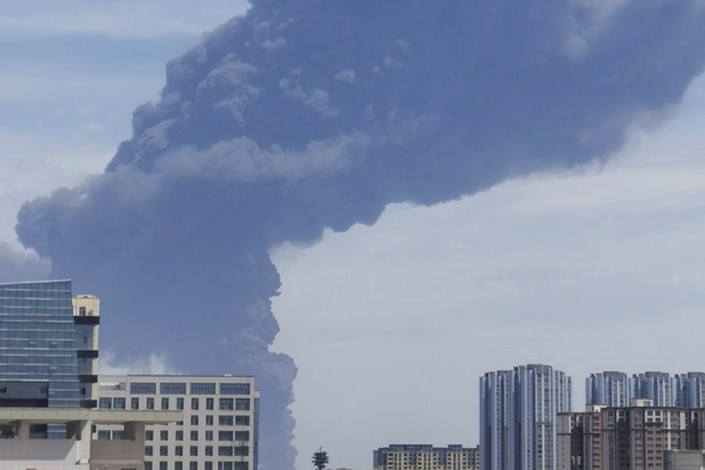 The incident occurred as supplies of polysilicon worldwide were already tight, resulting in sharp price hikes for the raw material over the last year as installations of solar power accelerate worldwide.

The explosion occurred just before noon on Tuesday at a facility with capacity to make 200,000 tons of sealant annually that was still in trial production, Hoshine said in a statement (link in Chinese) the next day to the Shanghai Stock Exchange. It added the facility wasn’t involved in production of the company’s materials used to make polysilicon.

“The accident had no significant impact on the company’s production and operations,” it said.

Chinese media cited people nearby saying they heard two loud explosions, and photos and video from the scene showed a major plume of smoke coming from the facility. People were evacuated from several nearby industrial facilities, including one operated Daqo New Energy Corp., one of the world’s top polysilicon-makers, according to the reports.

A Daqo spokesman did not answer his phone or immediately respond to a written request for comment.

“The fire has now been extinguished, with no casualties,” Hoshine said. “Field tests show pollutants (from the explosion) are mainly particulate matter with no toxic or harmful gases. Environmental protection personnel continue to carry out air quality monitoring work, to ensure there are no secondary disasters.”

Hoshine said its emergency plan had kicked in after the explosion occurred, including its quick evacuation of people from the area, informing of local government agencies and provision of assistance to fire brigades and other emergency workers.

Xinjiang is home to a number of major manufacturing facilities involved in the polysilicon supply chain, including the one operated by Hoshine, as well as makers of finished polysilicon operated by Daqo, GCL-Poly, East Hope Group and Xinte Energy.

Those four make the up the backbone of a Xinjiang complex that supplies around 40% of the world’s polysilicon. Hoshine supplies both Daqo and GCL-Poly, according to one of the Chinese media reports.

New York-listed shares of Daqo fell 5% in Tuesday trade after word of the explosion came out, while Xinte’s Hong Kong-listed shares fell nearly 3% on Wednesday. Hoshine’s stock fell 2.6% on Tuesday, but regained all that ground and closed up 3.5% on Wednesday.

The blast came nearly a year after another similar explosion rocked a Xinjiang plant operated by GCL-Poly, which was the result of problems with a distillation unit.

Makers of polysilicon and their suppliers have raked in bumper profits over the last year on surging prices for their products due to tight supply. The average price of polysilicon is expected to be about 117 yuan ($18.29) per kilogram this year, or more than 50% higher than the average 76 yuan per kilogram last year, according to PV magazine.