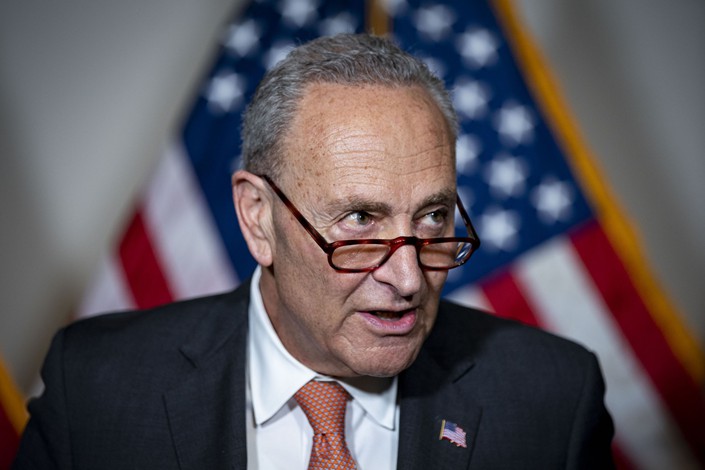 (Bloomberg) —The Senate overwhelmingly passed an expansive bill to invest almost $250 billion in bolstering U.S. manufacturing and technology to meet the economic and strategic challenge from China.

The 68-32 vote on the legislation Tuesday was a rare spot of bipartisanship in an otherwise polarized Senate and a clear indicator of the concern in both political parties that the U.S. risks falling behind its biggest global competitor.

“When all is said and done, the bill will go down as one of the most important things this chamber has done in a very long time,” Senate Majority Leader Chuck Schumer said on the Senate floor ahead of the vote. “Whoever wins the race to the technologies of the future is going to the be global economic leader — with profound consequences for foreign policy and national security as well.”

The legislation authorizes $190 billion in spending, much of it aimed at increased research and development at universities and other institutions. It also includes $52 billion in emergency outlays to help domestic manufacturers of semiconductors expand production, a provision that gained new urgency with a global shortage of chips that has idled U.S. automotive plants and disrupted the production of consumer electronics.

Despite the broad support in the Senate and an endorsement from President Joe Biden’s administration, the bill’s fate in the House is uncertain. House leaders haven’t publicly committed to acting on the Senate bill or set out a course of action beyond the House Science Committee considering its own plan for revamping the National Science Foundation.

However, Schumer said he’s talked with House Speaker Nancy Pelosi and House Science Committee Chair Eddie Bernice Johnson about the approach taken in the lower chamber. He said the Senate bill, after various amendments, is now closer to what the House is working on.

“It’s in President Biden’s agenda and I’m quite certain that we will get a really good product on the president’s desk,” Schumer said.

Schumer and Senator Todd Young, an Indiana Republican, were joint sponsors of the base of the legislation, focused on escalating federal support for research into innovations in technology and manufacturing. In a little more than a month since its introduction, lawmakers have debated a slew of amendments, as many sought to attach their own China-focused measures.

Schumer combined his and Young’s original Endless Frontier Act — named after a seminal 1945 report that led to the creation of the National Science Foundation — with legislation from the Foreign Relations Committee, Banking Committee and the Homeland Security and Governmental Affairs Committee, among others.

It mirrors Biden’s call to address a long slide in federal government spending on research and development. Last year, it amounted to 0.7% of gross domestic product, according to the National Science Foundation — a ratio flattered in part by the hit to GDP from the pandemic. R&D spending peaked at 2.2% of GDP in 1964 and was followed by decades of breakthroughs, including the moon landing, mapping the human genome and developing the internet.

Also added to the new bill was a separate initiative that provides $52 billion in incentives and grant programs to bolster domestic semiconductor manufacturing, sought by Republican Senators John Cornyn of Texas and Tom Cotton of Arkansas and Democrats Mark Kelly of Arizona and Mark Warner of Virginia.

The move was cheered by those in the industry, following months of complaints from manufacturers that a semiconductor shortage was hampering the delivery of everything from consumer electronic devices to pickup trucks.

“Semiconductors form the nerve center of America’s economy, national security, and critical infrastructure,” said John Neuffer, the president and CEO of the Semiconductor Industry Association. “We look forward to working with leaders in the administration and Congress to swiftly enact needed federal investments in chip technology to help ensure more of the chips our country needs are researched, designed and manufactured on U.S. shores.”

That money, along with another $2 billion for related programs, would be available upon the law’s passage. The other spending in the bill would be subject to the appropriations process. An amendment from Senator Ben Sasse, a Republican from Nebraska, would also authorize an additional $17.5 billion for the Defense Advanced Research Projects Agency — or Darpa — over a period of five years.

Some Republicans rejected the idea of the government directing research and industrial policy.

“Maintaining our technological superiority over China requires punishing bad Chinese behavior and relying on the natural innovative entrepreneurship of America’s market economy, not by imitating Chinese central planning,” Pennsylvania GOP Senator Pat Toomey said in a statement before voting against the bill.

Senate GOP leader Mitch McConnell, who had criticized earlier versions of the bill as “not ready for prime time” and weak on defense, said the legislation was an important step forward and a rare area of bipartisan compromise, but should not be the “final word” on U.S. competition with China.

“Needless to say, final passage of this legislation cannot be the Senate’s final word on our competition with China,” McConnell said on the Senate floor. “It certainly won’t be mine.”