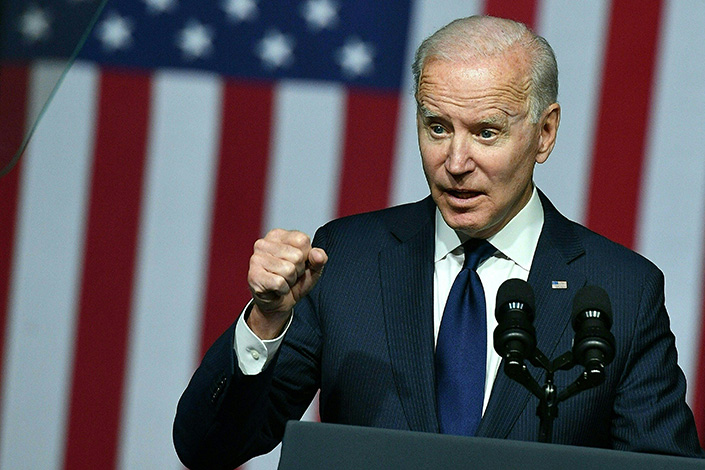 U.S. President Joe Biden this week expanded a list of Chinese companies that are banned from receiving American investment, removing 16 firms previously targeted by the Trump administration but adding 31 new ones.

Biden announced the changes with an executive order on Thursday that said “additional steps are necessary to address the national emergency” declared by his predecessor Donald Trump in November, which banned investment in companies with alleged links to the country’s defense and surveillance industries.

The move is the latest signal that Biden intends to maintain the Trump administration’s harder stance toward Beijing. The Democrat has refrained from easing tariffs on Chinese goods and stressed the need for the U.S. to outcompete the Asian nation on research and technology.

According to the order, the ban aims to address the “threat posed by (China’s) military-industrial complex” and curb the overseas use of Chinese surveillance technology to “facilitate repression or serious human rights abuse.”

Individuals and entities in the U.S. may not buy or sell securities or related interests in the listed companies starting from Aug. 2, the order says. However, they may continue to trade such securities until June 3 next year, at which point they will need to have fully divested from the firms.

The order applies to both U.S. citizens and noncitizens under American jurisdiction. Senior administration officials said the U.S. Treasury Department would enforce and update the list of companies on a “rolling basis,” according to Reuters.

At a press conference held Thursday in Beijing before the order was formally announced, a spokesperson for China’s foreign ministry urged the U.S. to “stop actions that undermine the global financial market order and investors’ lawful rights and interests,” adding that Beijing would take “necessary measures” to protect the rights and interests of Chinese businesses.

Continuity rather than change

When Joe Biden took his White House post in January, all eyes were on whether he would reverse the course of Trump administration, which had only intensified its restrictions on Chinese firms after U.S. President Donald Trump was voted out of office in November.

It was on Nov. 12, eight days after the U.S. election, that Trump signed executive order 13959 – “Addressing the Threat From Securities Investments That Finance Communist Chinese Military Companies.”

The order gave teeth to a decades-old U.S. Defense Department blacklist, decreeing that Americans would be banned from trading shares in a company from 60 days after it was placed on the list.

The Defense Department maintains the list of alleged “Communist Chinese military companies” under the National Defense Authorization Act, an annual U.S. defense appropriations bill. Specifically, the 1999 version passed by the Clinton administration added a requirement that the department maintain a list of such companies operating in the U.S.

The list was to be published annually, according to a November legal note from Arent Fox LLP, but the department ignored the requirement until last year after a bipartisan push to trigger the provision.

The order was beefed up in mid-January just days before Trump left the White House, with a divestment cutoff of Nov. 11.

The CMCC list is just one of four main blacklists maintained by the U.S. Department of Commerce, the Department of Defense and the Federal Communications Commission. Each list carries different implications, but taken together they are designed to steer investors, suppliers and customers away from the companies.

The blacklists have reshaped the fortunes of some of China’s biggest firms since they became a headline feature of Trump’s policymaking.

Huawei Technologies Co. Ltd., arguably the most well-known firm targeted, is now charging headlong into the car industry after sanctions cut off its supply of custom chips from Taiwan foundry TSMC. Huawei was forced to sell off its budget smartphone brand Honor late last year.

That has seen Xiaomi —which was never on the trade blacklist and won a court case to remove itself from the CMCC list this year — surge as it grabbed Huawei’s market share.