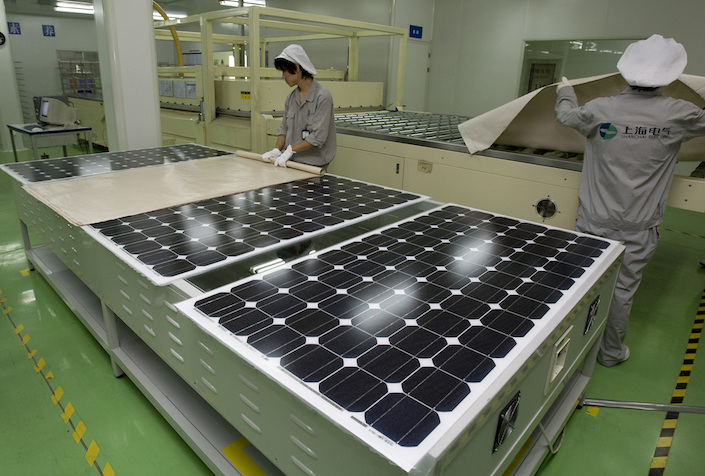 The price of polycrystalline silicon has skyrocketed over the past three months and is 2.5 times that of last year-end

In today’s Caixin energy news wrap: China’s crude steel production rises as prices start falling; regulators step up scrutiny of hoarding and stockpiling of solar panel materials and coal; freight transport on Yangtze River rises, and more miners are in danger in yet another mining disaster.

The China Photovoltaic Industry Association (CPIA) warned against hoarding of polycrystalline silicon and silicon wafer products amid recent price surges, saying it will further distort market prices of the key materials for the solar panel industry. The price of polycrystalline silicon has skyrocketed over the past three months and is 2.5 times that of last year-end, the association said. Some PV companies have drastically cut production or halted operations, even in breach of order contracts, taking a toll in the healthy development of the industry in China, the CPIA said.

China’s crude steel output up 6.3% in May

China’s output of crude steel totaled 98.08 million tons in May, up 6.3% from the same time a year ago, according to the China Iron and Steel Association (CISA). Production of cast iron declined 0.1% year-on-year to 77.27 million tons, while total output of steel products rose 7.1% to 122.69 million tons. According to CISA statistics, the aggregate price index of China’s steel products mounted to a record-high 174.81 in mid-May, then quickly fell to 144.07 at the end of the month — a drop of 3.2% compared with the end of April and 17.6% from the May peak.

Thirteen miners were trapped underground in a flooded iron ore mine in Shanxi province. The incident occurred Thursday at the Dahongcai Iron Mine in Daixian county, and rescue efforts are underway. This is China’s third mining catastrophe within seven days.

Five central government ministries launched an inspection of the Caofeidian Port in Hebei province for coal stockpiling, Futures Daily reported Thursday. The inspection, an investigation of hoarding and speculation, focuses particularly on coal merchants with large inventories and long-term storage. Caofeidian Port, a bayside port in Tangshan, Hebei province, is reported to have begun cleaning up coal on both sides of its corridor. According to traders, the inspection was mainly to uncover merchants that were engaged in hoarding and speculation, disturbing market order.

EVE Energy Co. Ltd. (300014.SZ) signed a strategic investment agreement with the High-Tech Industrial Development Zone in Jingmen, Hubei province, to set up a new-energy storage battery industrial park in the city. The park will have annual production capacity of 104.5 gigawatt-hours. EVE and its subsidiary will introduce lithium-ion energy storage battery-supporting industries into the park according to production demand.

China’s eastern-central coastal province Jiangsu, located downstream on the Yangtze River, recorded a surge of freight transport through inland waterways during the first months this year. A total of 295,100 20-foot equivalent units (TEUs) of containers were transported in the province during the period, up 45.21% from the same period a year ago. Since the beginning of the year, Jiangsu province has opened six new inland river container routes, linking major ports along the Yangtze River.