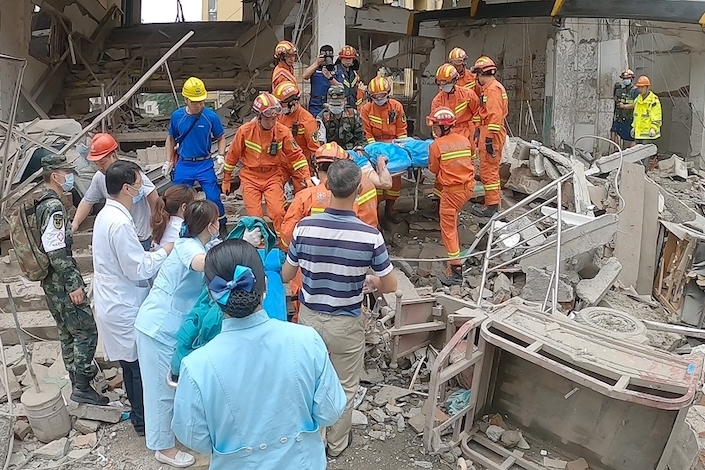 Thousands of rescuers, including firefighters and medical workers, are working at the site of a massive gas pipe explosion at the Yanhu community market of Shiyan, Central China's Hubei province

A nuclear power plant in Taishan, South China’s Guangdong province, disputed media reports of a possible leak, saying all environmental indicators remain “normal.” CNN reported Sunday that the U.S. government spent the past week assessing a report of a leak at the Taishan plant after a warning of an “imminent radiological threat” from France’s Framatome, which partially owns and operates the plant. Taishan Nuclear Power Joint Venture Co. Ltd., the plant’s operator, said Saturday that all environmental indicators at the Taishan nuclear plant and the surrounding vicinity remain at normal levels.

At least 25 people died after a gas pipe exploded in a residential community food market in Central China’s Hubei province, leaving dozens buried in the debris, according to Chinese media and local government statements. At least 138 more were injured. The blast, which occurred around 6:30 a.m. Sunday in the city of Shiyan, caused the market in the Yanhu community to collapse, leaving “many” residents and vendors trapped underground, local authorities said. The cause of the blast remains under investigation.

Ganfeng Lithium to invest in Mali mine

A unit of Jiangxi Ganfeng Lithium Co. Ltd. (002460.SZ) will acquire 50% of a Netherlands-based special purpose vehicle for $130 million, the company said Monday. The deal will give Ganfeng access to lithium from the mineral spodumene produced by the Goulamina mine project in Mali. The mine has proven reserves of 8.4 million tons of spodumene with an average grade of 1.57%. After the transaction, Ganfeng may consider putting up as much as $40 million to help develop the project.

Southwest China’s Yunnan province became the latest province to crack down on virtual currency mining, which consumes vast amounts of electricity. The Energy Administration of Yunnan issued a notice Friday ordering a probe into misappropriation and unauthorized use of electricity by bitcoin miners by the end of June, local media reported. Illegal mining activities will be shut down, a government document circulated online said. Yunnan, China's fourth-biggest bitcoin mining hub, joined several other areas restricting crypto mining, including Inner Mongolia, Xinjiang and Qinghai.

The Zhanatas 100 megawatt wind power plant in Kazakhstan will be completed and start operation by the end of June, the official Xinhua News Agency reported. The project, which is Central Asia’s largest wind power plant, was jointly backed by China Power International Holding Ltd. and Visor Kazakhstan. The plant can generate 350 million kilowatt-hours of electricity a year, enough to power 1 million Kazakh homes.

The world’s first purely electric bulldozer, the “SD17E-X,” was officially delivered and put into service in Zunyi, Guizhou province. The equipment is the first zero-emissions bulldozer. The 240 kilowatt-hour bulldozer can operate continuously for five to six hours on a full charge. Compared with traditional fuel-powered equipment, the bulldozer can reduce running costs by more than 60%.