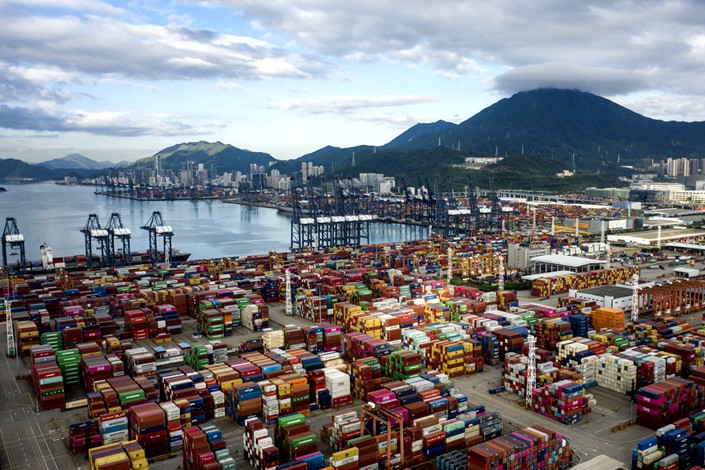 pictureShipping containers sit stacked next to gantry cranes at the Yantian International Container Terminals in Shenzhen on Sept. 6, 2019. Photo: Bloomberg

(Bloomberg) — The global shipping industry, already exhausted by pandemic shocks that are adding to inflation pressures and delivery delays, faces the biggest test of its stamina yet.

When one of China’s busiest ports announced it wouldn’t accept new export containers in late-May because of a Covid-19 outbreak, it was supposed to be up and running again in a few days. But as the partial shutdown drags on, it’s further snarling trade routes and lifting record freight prices even higher.

Yantian Port now says it will be back to normal by the end of June, but just as it took several weeks for ship schedules and supply chains to recover from the vessel blocking the Suez Canal in March, it may take months for the cargo backlog in southern China to clear while the fallout ripples to ports worldwide.

“The trend is worrying, and unceasing congestion is becoming a global problem,” A.P. Moller-Maersk A/S, the world’s No. 1 container carrier, said in a statement Thursday.

The situation in South China is another “in a string of disasters we’ve seen plague the global supply chain,” according to Nerijus Poskus, vice president of ocean strategy and carrier development for Flexport Inc., which makes software that helps companies manage their supply chains.

He estimated the congestion in Yantian will take six to eight weeks to clear.

That timetable is a problem because it extends the disruptions into the late-summer period of peak demand from the U.S. and Europe, where retailers and other importers restock warehouses ahead of the year-end holiday shopping rush.

Usually cheap and invisible to companies and consumers, ocean freight that’s now more expensive than ever has become a double-edged threat to the world economy: by acting as both a drag on commerce and a potential accelerant for inflation. In the U.S. on Wednesday, Federal Reserve policy makers raised their inflation forecasts partly because bottlenecks have formed as supply fails to keep pace with demand.

Drewry Shipping data released Thursday showed no let-up as container rates on several routes kept climbing, including an increase to $11,196 for a 40-foot box to Rotterdam from Shanghai. That’s a nearly seven-fold increase from a year ago.

While the situation at the Chinese port is improving, on Wednesday there was still an average waiting time of 16 days, according to a separate statement from Copenhagen-based Maersk, which is diverting most of its ships elsewhere in June.

But the rerouting by Maersk and other companies will likely only add to the congestion and delays at nearby ports, the statement said.

Some retailers in the U.S. have started informing customers looking to buy new furniture made in China that delivery could take as long as 10 months even if they place an order now, according to Steve Kranig, director of logistics at IM-EX Global Inc. The port congestion in Guangzhou and Shenzhen has also affected assemblers in Southeast Asia, who import raw materials to make armchairs and tables for export to the U.S., he said.

“I would expect more delays to come because soon they will compete with cargo that is for the upcoming Christmas season. Since inventories are so low, I expect big retailers to try and ramp up so they can have products to sell in time for the holidays,” Kranig said.

Even without the Suez blockage or port backlogs, the global transportation system would probably still be struggling with maxed-out capacity. Exports from China and other Asian nations are at record highs, as U.S. and European economies reopen and other markets such as India buy medical goods to help with their ongoing outbreaks.

China’s trade boom shows no sign of letting up, with exports the third-largest on record in May and the third and fourth quarters usually the biggest periods for trade in any given year.

“There are still a number of problem spots that will pose challenges to global trade and logistics activities in the second half of 2021,” according to Nick Marro, lead analyst for global trade at the Economist Intelligence Unit in Hong Kong. “The biggest risk will be recurring Covid-19 outbreaks, which we can probably see as inevitable owing to the new variants, but this will also include mismatched supply and demand for container space and existing logistical bottlenecks in major Western ports.”

Some of the goods that couldn’t leave China through Yantian were diverted to other nearby terminals, such as the one run by Guangzhou Port Co. That’s caused periodic delays there, although the congestion has eased a lot, a worker who only gave a family name of Lin said Thursday.

Even so, that’s not been enough to make up for the disruptions at Yantian, which may have affected the equivalent of about 1 million 20-foot containers so far, according to Peter Sand, chief shipping analyst at Bimco. Yantian handles about 13 million a year.

“Adding another disruption on top of the current state of emergency is obviously making a stretched supply chain even more fragile,” he said.

There are currently 139 container vessels anchored off the coast of China, about 50% more than the average from mid-April to early May, according to Bloomberg analysis of vessel data.

Some goods have stopped shipping altogether. Chong Junxiong owns a clothing firm called Genesis Group Pte. Ltd. in Singapore, and contracts production to a manufacturer in Dongguan, near Shenzhen. Not only has his supplier been shuttered due to Covid, but he can’t get any deliveries as shipments have also halted.

“There are bottlenecks in ports all over the world because of Covid outbreaks -- people are not going to work in the same numbers and aren’t working at the same speed as they did before the pandemic,” says Bjorn Hojgaard, CEO of Anglo-Eastern Univan Group, a company that manages operations for a fleet of 700 ships globally, including everything from tankers to bulk to container ships.

“It’s taking longer for shipping to recover than what was expected a few months ago, but I’m hopeful that going into the fourth quarter in 2021 and the first quarter in 2022 we will see the resumption of activity in many parts of the global economy and certainly a normalization of some of the challenges we face in shipping.”