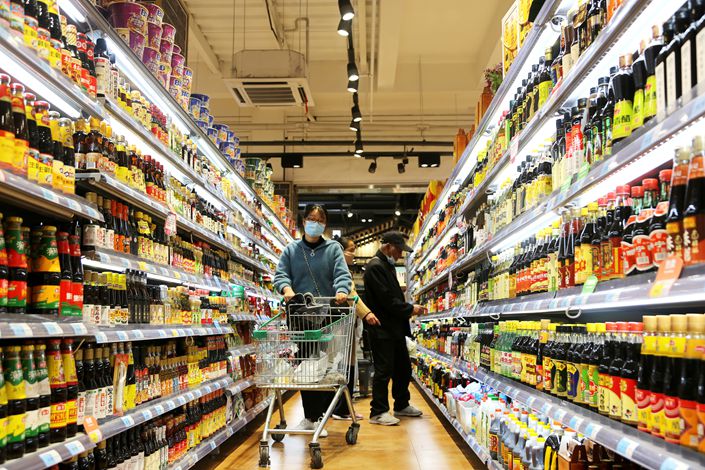 Consumers shop at a supermarket in Lianyun district of Lianyungang city, East China's Jiangsu province, on May 11. Photo: VCG

China’s central bank has sought to calm growing concerns that surging commodity costs will fuel increases in consumer prices, saying that imported inflation is “generally controllable” and factory-gate prices will stabilize after global production and supply recover from the Covid-19 pandemic.

“As a large economy, the increase in international commodity prices is not, on its own, likely to trigger any obvious imported inflation in China as long as it is not accompanied by overheating domestic demand,” the People’s Bank of China (PBOC) said in its first-quarter monetary policy implementation report (link in Chinese) Tuesday. “The rise in global commodity prices may boost China’s PPI (producer price index) in stages, but the risk of imported inflation is generally controllable.”

Nevertheless, globally, the forces driving price gains will be “difficult to eliminate in the short term” and inflation “may continue to rise moderately for a period of time,” the PBOC said in its report which was published the same day the National Bureau of Statistics reported the biggest jump in factory-gate prices in three and a half years.

“China maintained a normal monetary policy and did not flood the economy (with liquidity)” during the pandemic in 2020, the PBOC said. “There is no basis for long-term inflation or deflation.”

The central bank’s analysis and comments come amid growing concerns in China and overseas that the world is entering a period of rapidly accelerating inflation, as global demand recovers from the pandemic more rapidly than supply is able to respond to in the wake of unprecedented fiscal stimulus measures and lax monetary policies in major developed countries. Factories around the world are facing headwinds from surging commodity prices, rising shipping costs and shortages of components including semiconductors.

As the world’s second-largest economy, and biggest manufacturer and goods exporter, China is a major importer of commodities such as oil, iron ore and coal whose prices have been surging this year, fueling expectations that inflation will accelerate. On May 6, the world's oldest commodity index — the U.S. Commodity Research Bureau Index (CRB Index) — rose to its highest level since September 2011 and was up 55% from a four-year low in March 2020. The Global Food Price Index released by the Food and Agriculture Organization stood at the highest in almost seven years in March.

Companies across the globe have announced plans to raise prices to protect their profit margins. In the U.S., consumer goods giants including The Coca-Cola Co., and Procter & Gamble Co., maker of Head & Shoulders shampoo, have said they will put up prices and in China, white goods makers including Midea Group Co. Ltd. and Haier Electronics Group Co. Ltd. are taking similar action, citing higher raw material, logistics and labor costs.

China’s PPI, which gauges changes in prices of goods circulated among manufacturers and mining companies, has shot up this year after 11 months of negative price growth. In April, the index rose 6.8% year-on-year, the biggest jump in three and a half years, and many economists forecast the rate could accelerate to as high as 9% later this year.

The increase in the PPI has been driven mainly by rising costs of imported commodities, such as iron ore, copper, and especially crude oil, which has a long downstream industrial chain and affects prices of chemicals and other products, the PBOC said in its analysis. The effect of imported inflation, coupled with a low comparison base last year when the industrial activity was disrupted by the epidemic, could continue to push the index higher in the second and third quarters, the PBOC said.

The trend of the PPI should be viewed from a “historical and objective” perspective, the central bank’s analysis said. In addition to the impact of a low comparison base, historical records show that the PPI reading can show significant fluctuation within a matter of months. In addition, the rise in global commodity prices is a reflection of a temporary “mismatch” between current supply and demand, it said.

Prices may increase at a slower pace when the pandemic is completely under control and the production and supply capacity of emerging market countries return to pre-epidemic levels. “The PPI will become more stable after the low base effect gradually fades and global production and supply recovers,” it said.

There are growing concerns that the surge in factory-gate prices will feed through into consumer prices. The consumer price index (CPI), which measures changes in prices of a basket of consumer goods and services, rose 0.9% year-on-year in April, more than double the pace in March.

But the PBOC said it believes that the transmission relationship between domestic PPI and CPI has significantly weakened in recent years, and that fluctuations in global commodity prices have a correspondingly low impact on the trend of domestic consumer prices.

Food prices account for about a third of the basket of goods that make up the CPI and pork, which accounts for a significant element of the food component, was the main driver of the index last year as an outbreak of African swine fever devastated supplies of the meat. The domestic supply of live hogs has basically recovered and pork prices are generally declining, grain harvests have been ample, and the self-sufficiency rate of agricultural products is generally high, the PBOC report said, adding that the CPI is expected to increase moderately this year and will remain within a reasonable range.

Even so, the central bank said it will pay close attention to the impact of rising global commodity prices on different industries and enterprises domestically and will roll out proper policies to stabilize supply and prices in a timely manner to prevent market fluctuations.