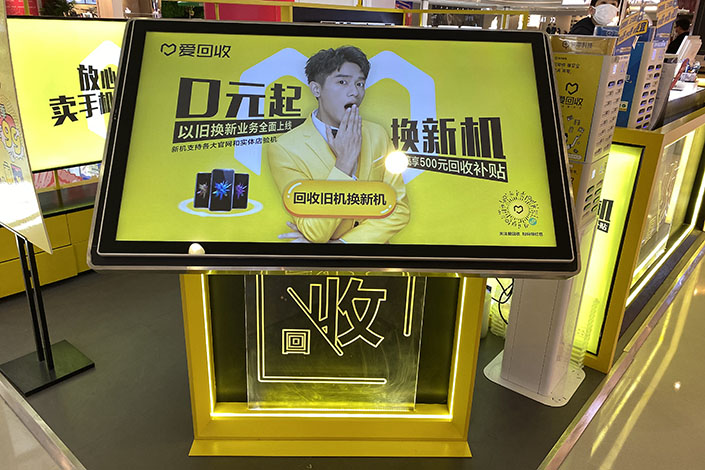 An Aihuishou store in Shanghai in March 2020. Photo: VCG

The share price of Aihuishou International Co. Ltd., a mobile phone recycling and second-hand sales platform, jumped by more than 20% on its first trading day on the New York Stock Exchange, as the Chinese company embarked on a lucrative initial public offering (IPO).

The JD.com Inc.-backed firm’s American depositary shares (ADSs) soared by as much as 28% from their listing price of $14 when trading began on Friday, before settling back to close up 22.93% on the day at $17.21.

The decade-old, money-losing company, which has rebranded its platform as “ATRenew,” issued 16.23 million ADSs. The $14 offering price represented the middle of its previously set range.

The flotation raised $227 million, excluding any additional funds that may be raised if underwriters exercise their option to sell additional shares in response to heavy demand.

The Shanghai-based firm has said it plans to use the funds to improve its technology. The funding target is less than its reported goal of between $500 million and $1 billion reported by Reuters in April.

Founded in 2011, Aihuishou, whose name translates as “love recycling,” started out as a cellphone recycling and metals recovery company before evolving into one of China’s largest second-hand goods platforms. It makes money by selling used cellphones and other consumer electronics, and by providing related services.

Investors have been drawn by the company’s hybrid business model, which combines its online platform with more than 750 offline stores and kiosks, a combination that aims to bridge the trust gap between consumers who buy second-hand products and those who sell them.

In a prospectus filed with the U.S. Securities and Exchange Commission at the end of May, the company said its dependence on JD.com — China’s second-largest e-commerce platform — and negative operating cash flows were key risks in its business outlook.

Aihuishou is the fifth JD.com-backed entity to list in the past year. A subsidiary of the online shopping giant held 34.7% of Aihuishou’s total issued and outstanding shares before the IPO, according to the prospectus.

The company’s other shareholders include Wuyuan Capital with 13%, Tiger Management with 2.5% and Tiantu Capital with 2.9%.

The company made a net loss of 470.6 million yuan last year, down from 704.9 million yuan the year before. Its net revenue climbed around 25% to 4.9 billion yuan over the same period, while total consumer products transactions leapt 48.4%.

In the 12 months through March, the company’s gross merchandise volume (GMV) was 22.8 billion yuan, representing a year-on-year rise of 66.1%, the prospectus says. The total number of goods sold on the platform rose 46.6% over the same period the previous year to 26.1 million.

China’s highly dispersed market for used consumer electronics is growing thanks both to the buildup of unused electronics in people’s drawers and closets, as well as strong demand for pre-owned products among people with comparatively low incomes, according to the prospectus.

The number of phones recycled annually in the Asian nation rose from 56.3 million to 85.7 million between 2015 and 2019, representing a compound annual growth rate of 11.1%, according to a report released last year by research institute Leadleo.