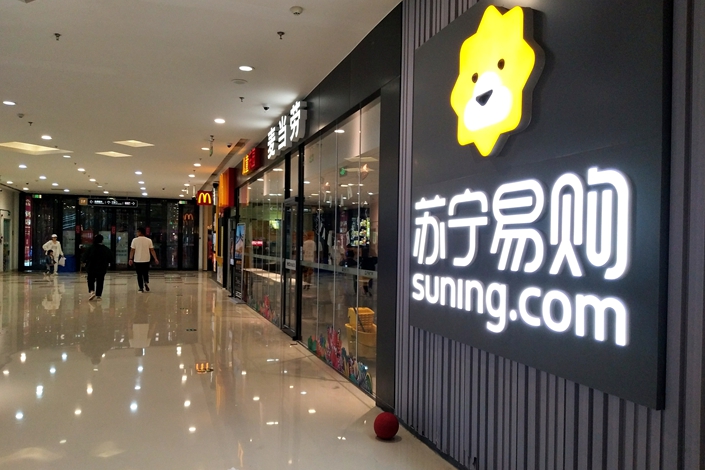 Debt-ridden Suning has suspended trading of its Shenzhen-listed shares for a further 10 days as it looks for new investors. Photo: VCG

Chinese retailing giant Suning.com Co. Ltd. (002024.SZ) has unexpectedly announced plans to buy a stake in a company owned by a Shenzhen government-backed investment fund even as it continues to frantically sell off assets including staff apartments in order to pay down its spiraling debts.

The company hopes that buying the stake owned by Shenzhen Capital Group. Co. Ltd. will garner it more high-quality assets such as shops and it will use funds raised from newly issued shares and cash to finance the deal, according to a Tuesday filing (link in Chinese) to the Shenzhen Stock Exchange.

Caixin learned that Suning.com’s move may be linked to a company called Yunwang Wandian (云网万店) Technology Co. Ltd., which it founded in November with 6 billion yuan ($926 million) in financing led by Shenzhen Capital. Sources told Caixin Suning was seeking access to the firm’s cloud services including logistics, supply chain and aftersales to retailers.

Suning.com’s shares will be suspended for 10 trading days from Wednesday, resuming on July 7, it said in the filing.

The planned acquisition, which is yet to be finalized, comes as Suning struggles to raise cash to repay tens of billions of yuan in debt after it fell into a liquidity crisis last year.

Once a retailing pioneer, founder Zhang Jindong had hoped to build Suning into China’s version of a ‘Walmart-plus-Amazon’ and thus embarked on aggressive expansion between 2015 and 2019, investing in real estate, telecom, sports streaming and star football club Inter Milan.

Read more
Cover Story: What Will Suning Have to Sell Next?

This buying spree accrued massive debts, which the company has tried to repay through state bailouts and offloading assets, even preparing to sell apartments it built especially to house its employees in its home city of Nanjing.

In February, Suning.com signed an agreement with two state-owned investment entities in Shenzhen that includes the sales of a combined 23% of the company’s shares for 14.8 billion yuan.

However, the purchase is yet to be completed, with the two state-owned investors apparently getting cold feet over the deal as they continue their due diligence, sources close to the deal told Caixin.

In a separate statement (link in Chinese) on Tuesday, Suning said that a significant share transfer is ongoing, but it did not announce to whom it was selling its shares. Sources told Caixin the company is likely seeking new buyers because state-backed funding has not been secured.