By Wei Yiyang and Wang Xintong 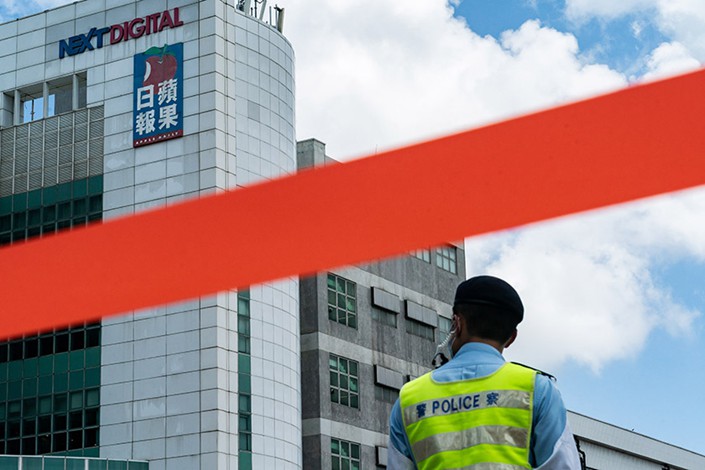 nullPolice tape surrounds the headquarters of the Apple Daily newspaper and its publisher Next Digital Ltd. on June 17 in Hong Kong. Photo: VCG

Apple Daily, once one of Hong Kong’s best-selling newspapers, issued its last printed edition Thursday, marking the end of a 26-year run as the paper’s finances and staff came under increasing pressure over alleged violations of the region’s new national security rules.

The board of parent company Next Digital Ltd. (00282.HK), owned by media tycoon Jimmy Lai, announced the paper’s closure Wednesday, according to state-run broadcaster CCTV. Its website also stopped operating.

Taiwan’s Apple Daily — its sister publication — issued a final printed edition on May 17 after 18 years. Next Magazine, an entertainment magazine owned by Next Digital, announced Wednesday that it’ll cease operations.

Founded in June 1995, the paper had been circulating in Hong Kong for 26 years, with branches in Taiwan and North America. Its print version featured large colorful graphics and sensational stories. The paper vocally supported the anti-government protest movement which emerged in the city in 2019.

In August last year, local police arrested Lai on suspicion of colluding with foreign forces to endanger national security. They also detained his two sons and four senior executives at Next Digital and Apple Daily.

In April, Lai was convicted of organizing and participating in illegal assemblies in August 2019. His appeal of this conviction is pending.

On June 17 police arrested another five senior Next Digital and Apple Daily executives. Most were accused of violating the National Security Law that came into effect in June 2020. The same day, Apple Daily’s newsroom was searched by police, who reportedly seized hard drives and computers.

Apple Daily has said its bank account and that of Next Digital were frozen last week on the order of the city’s police and security bureau. The paper said it would have to cease operations if the accounts were not unlocked — which they haven’t been yet.

Hong Kong Chief Executive Carrie Lam said Tuesday that the recent actions taken by the city’s police and security bureau against companies such as Apple Daily were in accordance with the national security law, the state-run Xinhua News Agency reported.

The government will strictly enforce the National Security Law and punish those who violate it, Lam said.

As one of the city’s highest circulation paid newspapers, Apple Daily triggered a price war in the local industry after it set its newsstand price at a low HK$2 ($0.26) per copy in the first month of its launch. Multiple newspapers collapsed amid the price war, including TV Daily and Hong Kong United Daily.

According to the most recent data released by Next Digital, the paper’s daily average circulation was 86,189 from April 2020 to September, down 5.58% year-on-year. It said in a Wednesday statement that it would print 1 million copies for its final edition. Trading of Next Digital’s shares has been suspended since June 17, and its stock price stands at HK$0.29 per share.