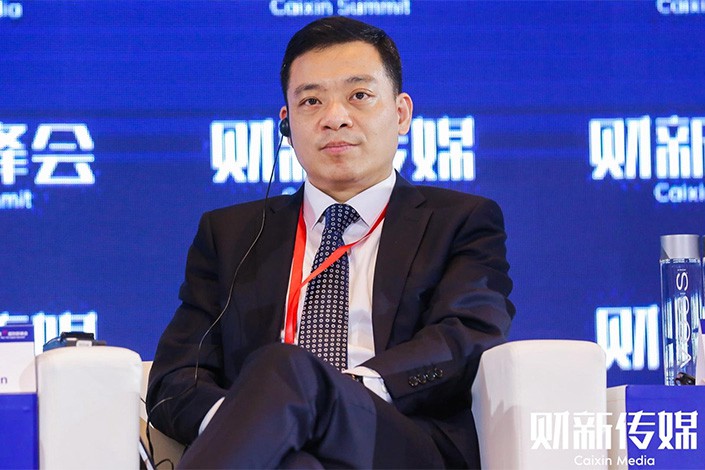 Editor’s note: In a speech in May, Zhou Chengjun, the head of research at the People’s Bank of China (PBOC), garnered wide attention when he said that the central bank has to admit that in the process of internationalizing the yuan, it can’t control the currency’s exchange rate and will eventually need to relinquish any hope of controlling it. The yuan’s exchange rate can only be decided by the preferences, expectations and transactions of market entities around the world.

What follows are translated excerpts from Zhou’s speech at the 2021 Spring Moganshan Conference, which have been edited for clarity. This is the first of a two-part story. Read part two here.

RMB internationalization is a natural process, rather than posing a challenge or alternative to the U.S. dollar. Instead, the RMB will join the dollar in handling certain international responsibilities, including the optimal distribution of global resources and adjustment of the supply chain, the upgrading the industrial structure and the transition of the global value chain.

To understand the logic underlying this position, one first must look to the “Triffin dilemma.”

Deep reflection on the part of the international community following the 2008 global financial crisis concluded in the belief that the international monetary system dominated by the U.S. dollar was itself a major cause of the crisis.

There is a broad global consensus among central bankers on this point. The highly influential countries that issue reserve currency are always faced with a conflict — on one hand are the goals of domestic monetary policy, on the other are the responsibilities and obligations as issuer of the global reserve currency. It is nearly impossible for the monetary authority to consider domestic goals and international roles at the same time. Notably, wherever there seem to be contradictions between the two, the monetary authority will always prioritize the domestic goals. This issue, dubbed the “Triffin dilemma” by economists, has never been effectively settled for the U.S. dollar since its establishment as an international currency in the 1960s.

It is the same case for the Federal Reserve. When apparent contradictions arise between domestic monetary policy and the U.S. dollar’s responsibilities as the international reserve currency, the Fed clearly demonstrates a certain orientation of selection of targets — that is, unlimited quantitative easing and the monetization of debts. Indeed, the Fed’s balance sheet has expanded from approximately $700 billion prior to the financial crisis to more than $7.6 trillion at present. To what extent is the U.S. dollar still credible? Do the U.S. and the Fed assume responsibility for potentially unlimited legal tender to holders of U.S. dollars around the world? The Triffin dilemma remains an unresolved issue.

The second rationale for the RMB’s internationalization is to improve the global division of labor and allocation of resources.

The third point to make here is the United States’ abuse of its long-arm jurisdiction and its dollar’s hegemony. The long-arm jurisdiction of the U.S. is an ideological weapon — aimed not only at China, but even at its neighbors like Mexico, strategic partners like Vietnam and developed Western markets like Switzerland with whom the U.S. has traditionally had close, friendly relations.

At a recent seminar presided over by former Chairman of the China Development Bank Chen Yuan, I analyzed the logic underlying this practice. It should be said that the long-arm jurisdiction of the U.S. is not merely the hegemony of power politics; it has logical and practical bases. One of these is the international use of the U.S. dollar. In terms of credit money, for one thing, it is a liability of the central bank that issues such currency. The central bank must be prepared to assume liability for the potentially unlimited legal indemnities of any outbound market entity that holds that currency. For another, an international currency that is in circulation, to be used in any corner of the world, will eventually flow back to the central bank where it is issued for the final settlement of claims and debts. The U.S. government and the Fed thus came up with a specific condition — that is, if any country, market entity or act thereof uses the U.S. dollar, they must abide by the principle of “least contact” and comply with U.S. interests. The holding, trade and settlement of every cent of every U.S. dollar in or out of the United States must be in line with U.S. interests; otherwise, the dollar’s use is forbidden. This is the United States’ own logic for its long-arm jurisdiction and extension of its domestic laws to other countries and regions. The requirement has its own rationale, to a certain extent. However, when the U.S. frequently uses the international usage of its currency as leverage to impose sanctions, and overemphasizes its interests but neglects its due international responsibility, an increasing number of countries and market entities are looking to reduce their dependence on the U.S. dollar or rid themselves of it completely. They look forward to more international currencies that can replace the U.S. dollar for international payments, liquidation and settlements. Thus the time is ripe for such a change. We could promote the internationalization of the RMB through active measures.

Renminbi as the currency of settlement

At one point in October, the euro outperformed the U.S. dollar as the world’s largest settlement currency. The same month, I was in Guangdong conducting a survey. A colleague from the local branch of the PBOC told me that the RMB had become the largest settlement currency in the Guangdong-Hong Kong-Macau Greater Bay Area (GBA), used for more than 53% of settlements in nine GBA cities’ foreign economic activities. As of the end of last year, renminbi settlements accounted for more than 46% of China’s total settlements in cross-border economic activities.

A few days ago, I attended a summit in Tianjin with Li Yang of the Chinese Academy of Social Sciences. There Li said that in the future, China’s international competition will largely depend on the internationalization of the RMB. But he was concerned about the overall process and effects of said internationalization because the RMB only accounts for a very small proportion of all international settlements, reserves, trade financing and other areas — roughly 2%. With such a low share, he wondered how the RMB would fare in competition with the U.S. dollar.

His data had come from SWIFT and was based on trade-by-trade statistics. So while it has a basis at the micro-level, the overall figures are substantial underestimates.

And how can we know that? Because the difference in statistical caliber is too great.

Another vital piece of context is that China is pursuing a “dual circulation” development paradigm, high-quality development and industrial transfer abroad. In recent years, especially since the escalation of trade disputes between China and the U.S., industrial transfer has been growing in China. I’d generalize the transfer as a well-established, large-scale movement whereby industries in domestic regions — especially along China’s highly developed eastern coast — continuously move a portion of their enterprises or industrial operations to neighboring countries, countries that are part of the Belt and Road Initiative or even as far away as Africa and South America. In the aforementioned destinations, China has established numerous industrial and industry parks. The largest park, in Belarus, covers more than 125 square kilometers. Moreover, rather than the result of government efforts, most of the industrial parks are the fruits of private enterprises’ own positive initiatives.

The reasons for that are many. First, with China’s economic and social development, the cost of factors such as labor and land are increasing; second, the renminbi is appreciating; and third, the tightened restrictions for environmental protection, safe production and other aspects in China. Acting together, these trends have weakened the comparative advantages of some of China’s traditional industries, undermining their edge in export pricing and international competition generally. In the past, U.S. shelves were stocked full of products “made in China.” But a lot has changed, and now these are being replaced by products “made in Vietnam” and “made in Bangladesh.”

But when did these industries begin to move to China on a large scale?

It was the Plaza Accord, signed in 1985, that started things rolling. Once it took effect, the Japanese yen continued to appreciate against the U.S. dollar, ultimately rising by about 250%. As the Japanese yen saw sustained appreciation, Japan began transferring its industries overseas, including to the “Four Asian Tigers” (South Korea, Taiwan, Hong Kong and Singapore). Later it targeted other destinations such as the “Tiger Cub Economies,” (Indonesia, Malaysia, Thailand and the Philippines) and then the Chinese mainland on a larger scale. Finally, East Asia’s “Flying Geese Paradigm” took shape.

It can be seen, then, that the transnational transfer of industry is a natural phenomenon arising from changes in economic development, patterns of comparative advantage and adjustments to the international division of labor. It is also the result of active behavior of Chinese enterprises to adapt to the new dual circulation pattern, unveiled last year, amidst the backdrop of profound adjustments to the current international landscape and global supply chain. As I see it, transnational industrial transfer is an important stepping stone toward the “establishment of a new system for a higher-level open economy,” which has been adamantly stressed by President Xi Jinping.

When China was receiving so many international industries, some of its local governments were very open-minded and tolerant on this point. Twenty to twenty-five years ago, when attracting foreign direct investment (FDI), they paid more attention to enterprises’ location than their ownership — as long as enterprises could invest and manufacture locally, they would surely contribute to GDP, create jobs and pay taxes, so it didn’t matter who owned them or where they came from. Local governments opened their arms wide. Nowadays, however, local governments have shifted more attention to enterprises’ ownership than their location. Now it doesn’t matter whether the manufacturing base is transferred to Vietnam, Malaysia or Kazakhstan; local governments only care that the research and development, profits and consolidated financial statements are locally based.

Throughout this process, the U.S. dollar generally served as the currency of settlement. The National Development and Reform Commission (NDRC) and the Ministry of Commerce would review and approve the amounts of foreign investment in U.S. dollars.

But the PBOC has been busy over the past two years. It has consulted and cooperated with the Ministry of Commerce, the NDRC, the Ministry of Finance (MOF), the State-owned Assets Supervision and Administration Commission (SASAC) of the State Council, and other ministries and commissions to try and settle large-scale and institutional industrial transfers overseas using the RMB, which would not only reduce exchange rate costs and control exchange rate risks — more importantly, it would expand the circulation of the RMB in foreign countries. Through this kind of large-scale industrial transfer, RMB will accumulate in the country receiving the investment. This can be used, on the one hand, to import machinery, equipment, production lines and related services from China; on the other hand, it can be used to purchase RMB stocks, bonds and other financial assets. That is, market entities of the receiving country can gain access to a package of transaction banking services from China’s financial institutions, thus opening up the financial market, rewarding market entities with high returns on RMB assets and sharing the dividends of China’s rapid economic growth.

Zhou Chengjun is the director of the PBOC’s finance research institute.