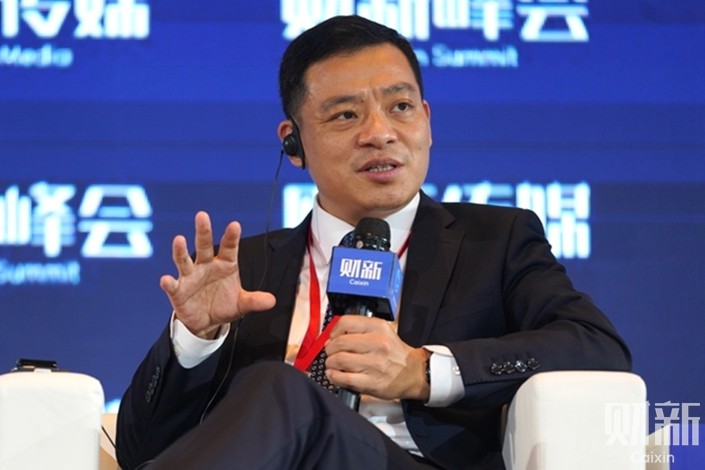 Editor’s note: In a speech in May, Zhou Chengjun, the head of research at the People’s Bank of China (PBOC), garnered wide attention when he said that the central bank has to admit that in the process of internationalizing the yuan, it can’t control the currency’s exchange rate and will eventually need to relinquish any hope of controlling it. The yuan’s exchange rate can only be decided by the preferences, expectations and transactions of market entities around the world.

What follows are translated excerpts from Zhou’s speech at the 2021 Spring Moganshan Conference, which have been edited for clarity. This is the second of a two-part story. Read part one here.

How to formulate and determine the RMB exchange rate?

First, we can consider how the exchange rate of the U.S. dollar is determined.

As a matter of fact, no international hedge fund is capable of going short or long on its own in a market with such a high average daily trading volume. If we break down the sum, only 20% (or $1.2 trillion) of dollar transactions occur within the American market; the remaining 80% ($4.8 trillion) occur outside of the U.S. as offshore transactions beyond the authority of the Federal Reserve System and U.S. Department of the Treasury. This means that the determination of the dollar’s exchange rate actually lies with the 80% — the offshore transactions — and not the 20% managed by the Fed and U.S. Department of the Treasury. In other words, an international currency’s exchange rate arises from the large number of transactions conducted by currency holders around the world. It is not decided by the central bank that issues the currency. Aside from that issuance, the central bank has no decision-making power.

This point has some significant economic and policy implications when it comes to the RMB exchange rate.

If we take internationalization of the RMB as a strategic goal, then we must also get a very clear understanding of the principles of exchange rate formation and role of RMB price signals, then formulate a top-level design accordingly. At the same time, we must offer Chinese enterprises support for allocating resources, arranging production and labor at the global scale. Indeed, we have no choice but to acknowledge that in the context of RMB internationalization, we can’t control its exchange rate, and the PBOC would ultimately relinquish any hopes of determining its exchange rate. The RMB exchange rate can only be decided by preferences, expectations and the transactions of market entities all around the world.

Does this argument hold up against the empirical data?

Actually, the evidence is already there.

Let’s look at some specific cases.

So, in the context of RMB internationalization, where exactly is the RMB foreign exchange market? Eventually, I think, it will not be the CFETS, not in the domestic markets for listing various small currencies against the RMB — no, the market will mainly exist overseas, in our neighbors and all countries with close investment and trade ties to China. It will be in their financial centers and markets, wherever they are willing to hold RMB positions and assets. In this case, the RMB exchange rate — generated through its widespread use in position and assets trades among global market entities — is an equilibrium exchange rate, and thus more transparent, reliable, evenhanded, predictable and stable. Such an exchange rate can better guide Chinese enterprises in their global allocation of resources and distribution of production, better realize supply chain adjustment and value chain transition, and better fulfill the requirements of China’s large-scale industrial transfer, “dual circulation” development pattern and high-quality development.

The International Monetary Fund (IMF) issued a report recently that is relevant to this point. It states that the currencies of countries having close investment and trade relations with China, such as South Korea, have begun to fluctuate around the RMB, demonstrating an exchange rate formation mechanism pegged to the RMB. Such a mechanism would not only benefit those countries; it would also be of great help to China.

Why Japan had a lost decade while Germany didn’t?

After the signing of the “Plaza Accord” in 1985, the Japanese yen continued to appreciate dramatically against the dollar, eventually rising by approximately 250%; likewise, the German Deutsche Mark also rose by about 250% before the introduction of the euro. Although appreciating by similar amounts, their results were quite different: Japan experienced a sustained decline and shift in its industries’ competitiveness, leading to the country’s so-called “lost decade” or “lost two decades;” Germany, meanwhile, remained at the center of European and even global manufacturing as well as at the high end of the global value and supply chains, its current account surplus still accounting for more than 10% of its GDP.

What made for the vast difference in outcomes, despite similar currency appreciation? One factor at work that my analysis has identified is the cost-sharing mechanism behind the appreciation of exchange rates. The cost of the yen’s appreciation was mainly borne by Japan alone, while for Germany, the cost of the Mark’s appreciation was borne not only by Germany but by all the countries in European Community (EC) industrial chain. At that time, EC countries’ currency exchange rates were pegged to the Deutsche Mark rather than the dollar. Thus, as the Mark continued to appreciate sharply against the dollar, all EC currencies were appreciating against the dollar along with it. This provided an objective basis for all EC countries to cooperate with Germany, helping to offset the pressures and costs inflicted by the rise in exchange rates and thereby maintaining the relative stability of the supply chain and industrial division of labor. Japan, in contrast, despite its extensive global expansion since 1985, which formed the so-called “flying geese paradigm” of East Asian industries and greatly increased its national economy’s foreign dependence, saw virtually none of its fellow “geese” peg their currencies to the yen. Thus, the sustained and substantial appreciation of the yen against the dollar had no direct effect on other currencies. Japan could only bear the negative consequences on its own. Therefore, unlike in Germany, currency appreciation led to the transfer of Japanese industries overseas and decline of Japanese competitiveness.

We can see, then, that while the rise of a national currency exchange rate does usually lead to a loss of competitiveness, the final result also hinges upon whether other countries in the supply and industrial chains help shoulder the consequences of that rise. In the process, if other countries at the center of the value chain are highly competitive and strong innovators themselves, they will also help move that country’s domestic industries toward the high end of the supply and value chains.

In the mid- to long-term, the RMB can be expected to continue appreciating against the dollar. Apart from China’s sustained economic growth and the RMB’s rising relative purchasing power, this is also a consequence of quantitative easing and continuous expansion on the part of the Fed. Empirical data backs this up — most countries successfully avoiding the middle-income trap experienced sustained appreciation of their currencies against the dollar once their per capita income exceeded $10,000. If the RMB becomes an anchor currency for China’s neighbors and economic partners, it would mean a common appreciation of their currencies against the dollar. This would undoubtedly help China address its external sectors’ loss of competitiveness initially caused by RMB’s appreciation. Not only that, it would also effectively accelerate optimization of the supply chain, the upgrading of industrial structure and transition of the value chain.

On April 5, legendary economist Robert Alexander Mundell passed away. But he left us with the Mundell-Flemming Model (M-F Model) of macroeconomics and concept of the “impossible trinity.” These tell us that among three goals, a country’s central bank can only choose two to pursue at a time — fixed or stable exchange rates, independence of monetary policy and free cross-border flows of capital — the third must be abandoned.

Under the conditions of RMB internationalization, we will not be able to manage its exchange rate, we are thus abandoning the first goal, leaving it up to global investors and their market transactions. Now our central bank can openly pursue the latter two.

How can we identify an independent monetary policy? First and foremost, such policy is clearly separable from fiscal policy, such that monetary policy is not applied to financial problems too readily or against its own principles. Although the central bank is entitled to cooperate and engage in close exchanges with financial departments, the boundaries between them must be very clear — considering, for example, establishing debts or equity, relevant responsibilities and obligations, and how to withdraw debts or equity. Second, the objectives of any single monetary policy must be as simple and clear as possible — for example, focusing on the continued liberalization of the interest rate to ensure it always reflects the natural and balanced level of economic growth and development.

Why has the PBOC’s monetary policy sometimes been difficult to implement in the past? Because it always had to keep an eye on the RMB’s exchange rate. The central bank has basically been responsible for keeping the rate stable and at an appropriate, balanced level.

In 2016 and 2017, for example, when the PBOC was tied down by its exchange rate objective, its second goal frequently swung back and forth between independent monetary policy and the free cross-border flow of capital. But once it abandoned its exchange rate goal, the bank was much more able to advance and clarify its monetary policy framework and to firmly pursue said policy independence and the openness of capital accounts.

The PBOC has made it clear; its days of normalized exchange rate intervention are over. Instead, the RMB’s exchange rate will generally be determined by the market, even if breaking through the important level of 7 yuan to the dollar. The RMB has now joined the ranks of the most volatile major currencies.

In this sense, our goals are very clear: on the one hand, we must pursue the independence of monetary policy, conform interest rates to the market and safeguard the international credibility of the RMB; on the other hand, we must promote the opening of capital accounts, seek the free flow of capital across borders and ensure that the Chinese currency is freely usable around the world.

In fact, only when China’s monetary policy is independent and its borders are open to the free flow of capital will participants in the international market feel motivated and confident in the balance of risks and returns when investing in RMB, holding and trading RMB-denominated assets or carrying out various liquidity management and hedging operations. Only when the level of interest rates fully reflects the rate of return of the real economy, and when capital fully flows across borders, may resources be effectively globally allocated in accordance with the RMB’s interest rates and exchange rate-related price signals. This alone will give Chinese entrepreneurs the support they need to go global, and help China achieve the high-quality development goal.

Zhou Chengjun is the director of the PBOC’s finance research institute.