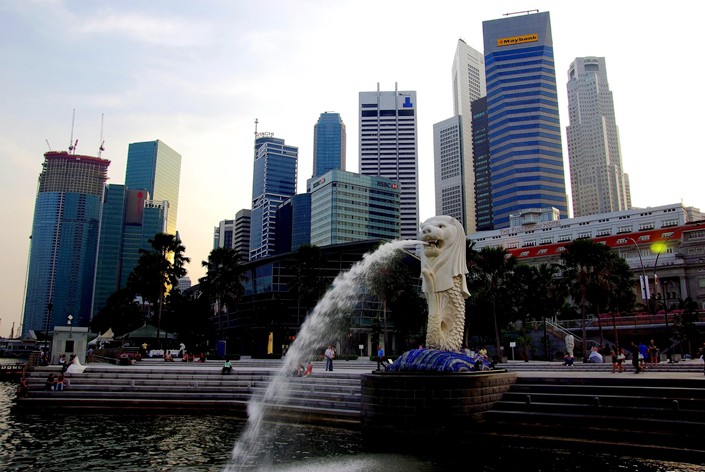 (ThinkChina) — With the signing of the Regional Comprehensive Economic Partnership (RCEP) and China’s Belt and Road Initiative, a growing number of Chinese businesses are setting up outfits in Singapore, creating more opportunities for financial services providers from China. Associate business editor Hu Yuanwen takes a look at Chinese banking and insurance companies moving into Singapore, and how Singapore’s business environment is changing.

Chinese-funded financial institutions have existed in Singapore since the 1930s, serving Chinese immigrants who were sending money home to their families.

Bank of China Ltd. (BOC) was the first bank from the country to set up a branch in Singapore, even taking on the role of a diplomatic bureau in the early days, providing consular services such as issuing visas for visitors to China.

As economic ties between Singapore and China deepen, an increasing number of businesses from China are using Singapore as a base to expand in the region. As a result, Chinese financial institutions have broadened their services to include commercial banking, investment banking, private banking, insurance, securities and investment.

In addition to providing loans, Chinese financial firms also offer a one-stop shop for the issuing of bonds, currency hedging, and underwriting IPOs. Individuals can also look to wealth management and estate planning services. Chinese financial institutions have also started to vie for a share of the personal finance market.

The draw of Southeast Asia

To date, MAS has awarded the license to only 10 foreign banks, of which Chinese banks make up the largest share. The other two Chinese banks with the status are BOC and Industrial Commercial Bank of China Ltd. (ICBC).

Other than banks, several insurance companies, securities firms, and fintech companies are also looking to use Singapore as a launch pad to the rest of the Southeast Asia market. With the signing of the Regional Comprehensive Economic Partnership (RCEP) and China’s Belt and Road Initiative, a growing number of Chinese businesses are setting up outfits in Singapore, creating more opportunities for financial services providers from China.

Liang Hao, associate professor of finance at the Singapore Management University, said Singapore has many advantages that serve as a draw for these firms. The two countries share similarities in language and culture, as well as close economic and financial ties. Singapore’s bid to establish itself as a fintech hub fits with Chinese fintech firms’ internationalization goals.

But Singapore’s small market may not be the ultimate prize of the Chinese financial firms, Liang said. Instead, their focus is on serving Chinese businesses and China’s strategy in regard to the internationalization of the yuan.

With Southeast Asia as one of the world’s fastest-growing regions, and Singapore a key gateway to the regional markets, Chinese financial institutions thus see setting up a branch here as a strategic step. It is also close to Indonesia, a key fintech market in Southeast Asia, with young consumers and a high smartphone penetration rate.

Second, Singapore has the necessary infrastructure and a complementary network of professional services — such as trustees, legal and accounting professionals — to support complex financial and insurance products. Third, there is a growing wealth management and retirement planning sector, driven by an aging population and high concentration of high net worth individuals. “Singapore is not only open to foreign investment, it has also integrated finance and technology successfully, promoting a higher level of cooperation and integration,” Thio said.

Singapore’s digital banking is one sector that presents opportunities. China’s Ant Group Co. Ltd. and a Greenland Financial Holdings-Linklogis consortium were each awarded a digital bank license to operate in Singapore. Other markets in the region have also set up regulatory frameworks that allow foreign-funded banks and tech companies market access.

Another promising sector is insurance, fueled by a rapidly growing middle class, rising wealth, and a tech-savvy population in Southeast Asia.

As competition intensifies in China, Southeast Asia’s significance to Chinese financial institutions and fintech firms will continue to grow, Thio said. “However, their success in Southeast Asia may depend on their ability to execute localized development strategies, and the local strategies they set for each of the highly diverse and distinct markets,” he said.

The BOC Singapore branch obtained QFB status in 2012. Since 2011, it has set up a commodities desk, a trade finance unit, a card unit, a wealth management center, and other regional platforms. In November 2015, it added a global energy commodities business center and a global commodities repo center.

Ren Dongyan, general manager of the CCB Singapore branch, told Lianhe Zaobao that member countries of the Association of Southeast Asian Nations (ASEAN) are accelerating the construction of rail, roads, ports, telecommunication facilities and other infrastructure, and a large capital gap exists for the financing of these projects. The Singapore office of the Asian Infrastructure Investment Bank was officially established in 2018, with the aim of boosting the participation of Singapore enterprises and financial institutions in the financing of infrastructure projects in Asia.

Shanghai Pudong Development Bank Co. Ltd. (SPDB) opened its Singapore branch in 2017, at a time when the yuan was experiencing volatility after liberalization, and Chinese enterprises’ foreign investments were subjected to greater scrutiny. SPDB decided to capitalize on Singapore’s position as a commodities trading hub and set up a commodity center in October 2018.

The biggest Chinese private bank, China Merchants Bank, started its private banking business in Singapore in 2017. As of the end of last year, the compound annual growth rate of the number of customers and the value of assets managed had grown 101.7% and 245.5% respectively. This is because more high net worth individuals are choosing Singapore as a base for personal wealth management, said Du Jing, general manager of China Merchants Bank’s branch in Singapore.

Yang said CTIS’s total premiums reached S$421 million ($317.5 million) last year, an increase of 57% over the previous year, while total value of assets grew 55% to S$939 million. Over the past five years, premiums and asset value respectively grew at an average of 56% and 31% annually.

China Life Insurance had a relatively late start in Singapore, setting up a branch only in 2015 as its base for expanding across Southeast Asia.

Lin Xiangyang, chief executive of China Life Insurance Singapore, thinks there remains a lot of room for development. “Insurance penetration rate in Southeast Asia is still lower than the global average,” he said. “Because of the difference in economic and technological development, the insurance market in each country is different.

“The demand for insurance also differs because of varying income levels, and this means a need for more diverse insurance products.”

He cited the example of Indonesia and Malaysia, where insurance coverage is generally inadequate. As more foreign-funded insurers enter Southeast Asia, and with the push into the use of insurance technology and applications, insurance products and payment modes will become more diverse.

More deal participants are drawn into the mergers and acquisitions trail here, amid thriving capital markets in the region.

Citic Securities Co. Ltd. operates in Singapore through its wholly-owned subsidiary CLSA Ltd.. Acquired by Citic Securities in 2013, CLSA had established a branch in Singapore in 1987, offering services such as equity financing, debt financing, and M&A consulting for the last 34 years. It was the underwriter for a number of high-profile transactions including the IPOs of Sea Ltd. in 2017 and Nanofilm Technologies International Ltd. in 2020.

CLSA has branches in Malaysia, Thailand, Indonesia and the Philippines. A CLSA spokesperson said countries in Southeast Asia use different languages, and have varying political conditions and business environments. In Thailand, for example, debt financing costs less while Singapore has a more mature equity financing market, and each market requires its own tailored strategy.

The Singapore branch of CLSA will continue to mine pan-regional opportunities between Singapore, Southeast Asia, and China, while also continuing to develop derivatives, fixed-income products, equity and debt financing, and other services, to seize the new opportunities that would come with closer cooperation between the Singapore Exchange and the two exchanges in Shanghai and Shenzhen.

Investors from Singapore and the region — especially the younger generation — are internet-savvy. Coupled with the pandemic, which led to an accelerated digitalization wave, the ground was prepared for the entry of fintech players. Tiger Brokers Co. and Futu Holdings Ltd. are two such companies that have launched digital investment platforms in Singapore.

Eng Thiam Choon, CEO of Tiger Brokers Singapore, pointed out that Singapore’s digital economy holds huge potential, with the number of active users growing continuously since the launch of Tiger’s platform in February last year. The company saw transaction volume in the third quarter of last year grow 540% over the previous quarter. Eng noted that Gen Z investors make up 30% of its local customers.

Futu’s online investment platform, moomoo, was launched in Singapore in February. Gavin Chia, director of Futu Singapore, said there was a growing number of “digital natives,” users who are comfortable with internet and technology from an early stage. Futu saw the number of its fee-paying customers grow sevenfold in the first quarter of 2021, with 70% of the new customers hailing from Singapore, Hong Kong, and the U.S.

Chia said the young generation of investors enjoy sharing their insights, which explains why platforms that feature investors’ discussion forums are popular.

Lu International, a unit of China’s Ping An Insurance Group Co. of China Ltd., was registered in Singapore four years ago and launched its online wealth management platform Lu Global in 2018. Lu Global and Thailand’s Kasikornbank PCL have also teamed up to launch FinVest, an online investment platform, last November.

Joanna Tang, CEO of Lu Global, said the company is planning to bring in investment and financial planning products from China and offer them to investors through the variable capital company (VCC) structure.

Launched by the MAS in January, a VCC can be made up of a single fund, or two or more funds, with separate holdings of assets and liabilities, which provides greater flexibility in the management of assets and risks.