Opinion: Seafarers Under Covid – China Should Fill Gap Left by India and Philippines 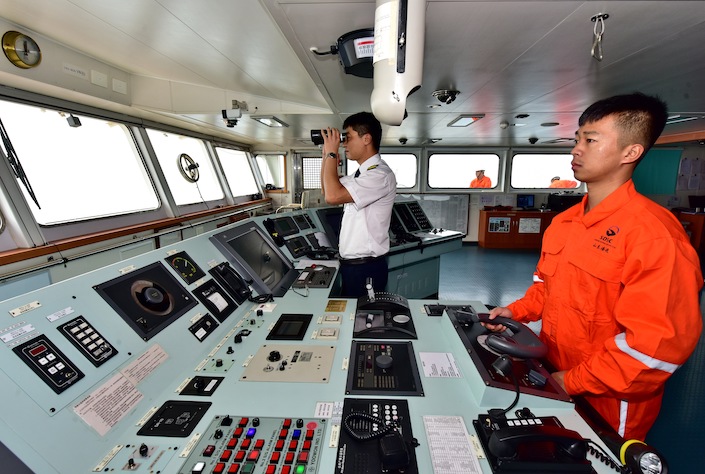 More than 1.6 million seafarers globally have worked tirelessly through the Covid-19 pandemic.

On June 25 every year, celebrations are organized by governments, shipping organizations and ship companies to acknowledge seafarers’ contributions to the world. It’s the annual international Day of the Seafarer.

More than 1.6 million seafarers globally have worked tirelessly through the Covid-19 pandemic, undergoing the stress and pressure of a series of uncertainties including entering and leaving ports, supplies, crew changes and repatriation. Their dedication and sacrifice underpin the global economy and keep the world running smoothly during the crisis.

The massive wave of Covid-19 infections in India, the third-largest supplier of seafarers with a global share of 15%, has driven the worldwide shortage of seafarers from bad to worse.

Many ports have banned ships from changing crew members who come from India, and some have prohibited the entry of vessels that have recently visited the country. Some international shipping companies are even refusing to allow Indian crew members to embark.

The pandemic has triggered several global shortages of shipping containers, vessels and now seafarers. However, these shortages can also be seen as opportunities for China.

Seafarers are central to future shipping

The oceans are natural ties that connect trade and cultural interaction among countries. More than 90% of traded goods are carried over the waves, giving seafarers a critical role.

In the 19th century, merchant sailing ships with a capacity of only a few thousand tons had more than 200 crew members. In contrast, the Ever Given cargo vessel that blocked the Suez Canal in March has a capacity of 200,000 tons and carries $3.5 billion of goods but requires only about 20 crew members. Despite freight rates being pushed up due to reduced crew sizes, fewer people operating a ship means more responsibilities for each crew member.

Compensation has not yet been finalized with the Suez Canal Authority regarding the blockage by the Ever Given. Loaded with 18,300 containers, the Ever Given is still anchored in the canal’s Great Bitter Lake with its crew stuck on board.

The experience of the Ever Given crew is only a mirror of the dire situation facing the industry. Data from the Baltic and International Maritime Council shipping association reveals that 135 seafarers were kidnapped in 2020. The pandemic lockdowns and quarantine policies have provoked a crisis in crew changes and repatriation. It is estimated that more than 400,000 seafarers were stranded at sea due amid pandemic in September 2020.

For thousands of years, diseases spread through person-to-person contact. The diseases transmitted through seafarers voyaging between Europe and America profoundly changed the world’s political economy. In the 14th century, people realized the importance of quarantining outsiders during pandemics. Mandatory quarantine measures first emerged in Ragusa, a port city on the Adriatic Sea, currently known as Dubrovnik. It was the world’s first legislation requiring the mandatory quarantine or isolation of trade vessels and caravans to screen for infections.

The old rules determined that crew quarantine or isolation was necessary for a crew change. However, the associated skyrocketing costs including quarantine fees, inspection fees and repatriation costs overburdened ship owners.

There have been increasing calls for seafarers to be prioritized for vaccinations. On Jan. 25, companies and organizations around the world signed the Neptune Declaration on Seafarer Wellbeing and Crew Change at the World Economic Forum to call for actions to facilitate crew changes by forming more elastic supply chains. The fundamental action in the declaration is to recognize seafarers as “key workers” and give them priority access to vaccinations.

However, excepting China, four of the top five suppliers of seafarers (the Philippines, India, Greece and Eastern Europe) all rely on vaccines provided by European and American companies. While Europe and the United States continue to hoard vaccines, low-income countries have been priced out of acquiring doses. In the shipping industry, ship owners at the top of the industrial chain care only about how to lower operating costs, so seafarers must depend on their home countries for vaccinations. The vaccine shortage is making conditions even worse for seafarers.

The proportion of Chinese seafarers in the global market is not low because heavyweight Chinese shipping companies such as China COSCO Shipping, China Merchants, Shandong Shipping and Seacon Shipping employ a large number of seafarers. But when it comes to the deployment market, Chinese seafarers have not been a very popular choice.

The Philippines, famous for its tradition of exporting workers — usually men as seafarers and women as housemaids — was the largest supplier of seafarers in the world before the pandemic. According to statistics of the Philippine Overseas Employment Administration, the country deployed 360,000 seafarers internationally in 2015, generating about $5.6 billion in foreign exchange earnings.

The Philippines is a predominantly Catholic nation. Filipino seafarers are proficient in English, obedient to their managers and passionate about working at sea. In addition, the Philippines has a highly developed professional education system in which most teachers are captains and chief pilots from top international companies. The Philippines exports a large number of professionals such as ordinary seamen and mechanics. The International Maritime Organization favors the Philippines and considers Manila the best choice for hosting Euro-American shipping forums and personnel training sessions.

India has rapidly grown to become the third-largest supplier of seafarers behind China and the Philippines. The number of Indian seafarers surged by 42.3% from 2013 to 2017.

Besides its natural advantages of being an English-speaking Commonwealth country, India’s surge in seafarer workforce was fueled by its national strategy. In the wave of globalization, many Indian senior officers became senior executives in shipping companies and international trade businesses, while many served as pilots and senior maritime officials for countries in the Middle East and North Africa.

The rise of seafarers from the Philippines and India is an inevitable result of the evolution of a profession dominated by Europeans and Americans in the early days. With the continuous advancement of navigation technology and the narrowing of the income gap between jobs at sea and those on land, more and more seafarers from low-income countries have emerged. In recent years, seafarers from low-cost countries such as Bangladesh, Myanmar and North Korea flocked to the maritime labor market, continuing an upward trend.

However, the pandemic has changed this trend.

The difficulties surrounding crew changes during the pandemic negatively affected seafarer deployment of the Philippines in 2020. Data from the Philippine Overseas Employment Administration shows that the employment of Filipino seafarers in 2020 dwindled by 58.1% compared with 2019.

There are many reasons why the world market for Filipino mariners is declining. First, the Philippine government made substantial efforts to protect the rights of Filipino seafarers at home, thereby increasing the cost of hiring them. Second, the Philippines issued strict regulations on crew changes, making it cease to be a popular destination for such operations.

The gap caused by the decline of Filipino sailors was mostly filled by seafarers from India and Eastern Europe (mostly Ukraine and Russia) in 2020.

But, after the reemergence of the pandemic in India, the global seafarer market has gradually lost its confidence in Indian seafarers. Most importantly, seafarers with recent travel history to India were prohibited from undergoing crew changes, delivering a fatal blow to the replacement of Filipino seafarers by Indian seafarers. Singapore and Fujairah (a constituent emirate of the United Arab Emirates), two crucial hubs in the international shipping industry, banned the entry of ships or crew that visited India. Other ports soon followed and adopted even more restrictive measures.

As seafarers from India and the Philippines decline, the global seafarer market is left with Chinese and Eastern European seafarers. Although Eastern Europeans still enjoy a solid competitive edge, they cannot keep up with the market demand due to their limited population size. More than 50% of trade goods in China and 90% of the global market are carried over the sea. In terms of number of seafarers, China ranked first in 2019 with 377,000 active seafarers, despite a large proportion working on the coastline or for local shipping companies.

China has demonstrated strong capabilities in Covid-19 prevention and control as well as nationwide vaccination. With efficient measures fighting the pandemic in China, Chinese seafarers have gained popularity in the global market. The shipbuilding industry has been thriving since the end of 2020, mainly driven by the prosperity within many segments of the shipping industry. New ships are expected to hit the water in 2023. Given the uncertainty of repeatable risks inherent in an infectious disease pandemic, Chinese seafarers will be the leading force in operating those new ships.

Furthermore, the regulatory restrictions surrounding crew change have also made China the preferred destination for such operations, giving Chinese seafarers a competitive edge. With China already recognizing seafarers as key workers and the availability of Covid-19 vaccinations, vaccinated Chinese seafarers are becoming increasingly popular in the world’s seafarer labor market, leading to rapid growth in their salaries.

However, as China grows, there has been a substantial shortfall in the supply of Chinese seafarers in recent years. Several factors are considered to be responsible for this shortfall, such as the decline in the wage gap between seafarers and on-shore workers, lack of social identity, insufficient medical facilities and coverage and limited internet access. As a result, six Chinese government ministries including the Ministry of Transport jointly published guidelines recently to build a sufficient, competent and well-structured marine workforce.

The lesson we have learned from the resurgence of the pandemic in India is that allowing the virus to continue to spread in any country will make the pandemic stretch on for years. Many years of courage, patience and dedication may be needed.

Against that backdrop, the international deployment of Chinese seafarers faces a window of opportunity. With favorable policies, this sector is expected to grow and thrive, continuously enhancing its influence and power.

The author is the Director of the Petroleum Business Division of the Shanghai Petroleum and Natural Gas Exchange.