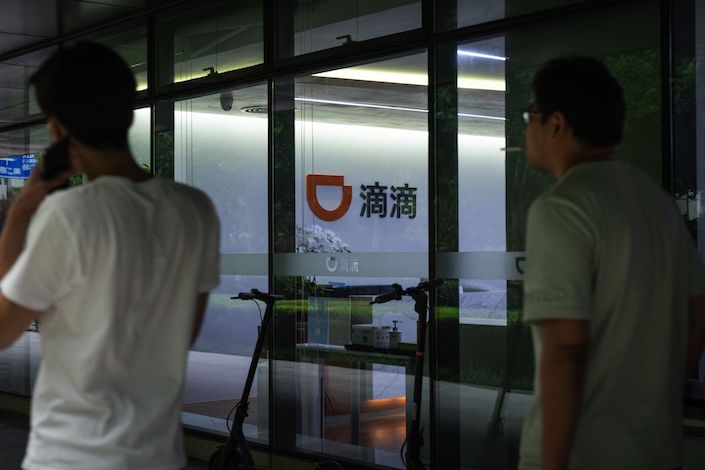 A logo inside the Didi Global Inc. headquarters in Beijing

(Bloomberg) — Didi Global Inc. plunged Tuesday in U.S. trading as the ride-hailing company faced scrutiny over its data security and a broader Chinese crackdown on companies listing their shares abroad.

China’s State Council issued a sweeping warning to China’s biggest companies, vowing to tighten oversight of data security and overseas listings. That announcement followed the opening of a security review by China’s internet regulator last week and a demand for app stores to remove Didi.

Didi’s American depositary shares fell 20% to $12.49, wiping out about $15 billion of market value and taking the stock below the $14 price from its initial public offering. Beijing-based Didi controls almost the entire ride-hailing market in China and raised $4.4 billion last week in the second-largest U.S. IPO for a Chinese firm.

The State Council’s broadside marked an escalation in President Xi Jinping’s campaign to bring the nation’s technology firms — and their reams of valuable data — under control. Over the weekend, China also moved against two other companies that also recently listed in New York — Full Truck Alliance Co. and Kanzhun Ltd., Ltd.

The warning “is aimed at securities violations, but it also makes special provisions for cross-border data supervision, which signals that data supervision has become one of the most important regulatory fields in China,” said Xia Hailong, a lawyer at the Shanghai-based Shenlun law firm.

“Since there is no mechanism in place for cross-border supervision of securities, conducting a security review on data could serve as an effective tool for Chinese regulators to rein in overseas listed companies,” he said.

The Didi probe stunned investors and industry executives, hammering the Hong Kong shares of peers from Tencent Holdings Ltd. — one of Didi’s largest backers — to Alibaba Group Holding Ltd. and Meituan. Investors worry that the latest security-based probes have opened a new front in Xi’s broader campaign against China’s internet giants that began in November with the collapse of Ant Group Co.’s $35 billion IPO and subsequent antitrust investigations into Alibaba and Meituan.

The crackdown has knocked about $42 billion off themarket value of firms listed on the Nasdaq’s Golden Dragon China Index, which tracks Chinese ADRs, since the government derailed the planned Ant IPO in November. Further moves included a record $2.8 billion fine levied against Alibaba after an antitrust probe found it had abused its market dominance, sparking concern about the future of the sector.

Meanwhile shares in Weibo Corp. surged after Reuters reported that the company’s chairman and a state investor are in talks to take the Chinese Twitter-like service, private. Weibo later denied holding any privatization discussions and the stock pared its gains. But the timing of the report sparked speculation that some Chinese companies are already looking for alternatives to a U.S. market listing. Weibo closed up 6.3% in New York Tuesday.

While Didi’s half-billion existing users will still be able to order rides for now, China’s cybersecurity crackdown adds to the uncertainty surrounding all the nation’s internet companies. Tencent Holdings Ltd., which has a stake in Didi, is down 2.7% so far this week, after sliding 3.6% Monday and partially trimming losses on Tuesday in Hong Kong. The onslaught of government announcements began on Friday after markets in Asia had closed.

U.S. exchanges remain a popular choice for Chinese entrepreneurs, especially in the tech industry, despite efforts by Beijing to encourage companies to list back home, including Hong Kong. Chinese firms raised $7.9 billion in the U.S. last month through first-time share sales, the most since Alibaba Group Holding Ltd.’s IPO in September 2014, according to data compiled by Bloomberg.

The number of companies based in China filing for New York IPOs has climbed for a third straight quarter despite weakness in other U.S.-listed stocks that conduct most of their business in China and amid the broad antitrust probe into the nation’s internet firms. The Golden Dragon China Index is down about 11% for the year, lagging behind the 15% gain in the Nasdaq Composite Index.