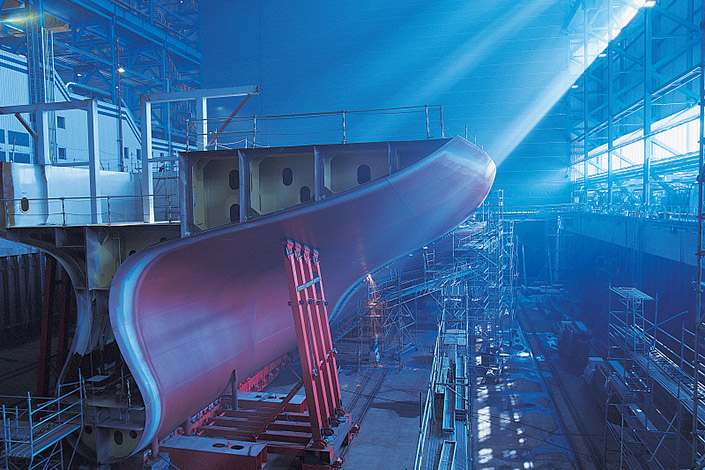 Since last year, demand for shipping has grown rapidly, as a number of countries import more daily necessities and medical goods and equipment due to Covid-19-induced disruptions in their domestic production. Photo: VCG

China is on track to be overtaken by South Korea in shipbuilding orders in the second half of the year, a new report argues, as rising raw material costs erode local shipbuilders’ advantages and discourage them to seek new business while those in their eastern neighbor rack up orders.

With rapid growth, South Korea is likely to outpace China in terms of new shipbuilding orders, shipping services provider Clarksons PLC estimated in a report on the global shipping market. New orders to China’s shipbuilders stood at about 10.59 million compensated gross tons in the first half of the year, the largest in the world and slightly higher than the 10.47 million tons received by the South Koreans.

The report points to fierce competition between Chinese and South Korean shipbuilders, as manufacturers in both countries try to seize opportunities in a booming global shipping market.

China’s shipbuilding costs have surpassed those of its rival as raw material prices in South Korea are currently lower than in China — for example, the average price of steel plates is about 7,000 yuan ($1080.8) per ton in China, while that in South Korea is equal to 5,500 yuan, a source at a state-owned Chinese shipbuilder told Caixin.

With a longer history of development, the South Korea’s shipbuilding industry has advantages over China’s in terms of efficiency, the source said. South Korean shipbuilders also have an edge in producing cutting-edge liquefied natural gas carriers, while their Chinese counterparts are better at making traditional container ships and bulk carriers, the person said.

Although orders were rising along with revenues, shipbuilders in China reported sluggish profits amid higher costs and fluctuating exchange rates. From January to May, 75 surveyed enterprises in the sector, including those engaged in shipbuilding and maintenance, reported a 17.9% year-on-year drop in total profits but a 13.7% rise in revenue from their main businesses, according to data (link in Chinese) from the China Association of the National Shipbuilding Industry.

Given low profit margins in shipbuilding industry, a sharp rise in material costs will erode profits further, another industry insider told Caixin (link in Chinese). “It is difficult for a Chinese shipbuilder to make a profit in 2021. At present, you’re likely to lose money if you take orders, but if you don’t take orders, you will lose even more money if your production lines are idle.”

Existing orders at Chinese shipbuilders were about 30.4 million tons and accounted for 38% of the global total, while their South Korean counterparts held a 33% share, the Clarksons report says. Japan ranked the third with a market share of 11%. Global new shipbuilding orders in the first half of 2021 reached the highest since 2014 as cargo shipping demand jumped globally, Clarksons said.

Since last year, demand for shipping has grown rapidly, as a number of countries imported more daily necessities and medical goods and equipment due to Covid-19-induced disruptions in their domestic production.

Recent disruptions in due to the blockage of Egypt’s Suez Canal and resurgence of Covid-19 cases related to Shenzhen’s Yantian Port, one of the world’s busiest ports, further pushed up demand for ships.

Some container shipping companies have benefited a lot from rising shipping prices. Cosco Shipping Holdings Co. Ltd. (601919.SH, 01919.HK), a Chinese state-owned shipping giant, reported (link in Chinese) 37.1 billion yuan in net profit attributable to shareholders in the first half of 2021, over 32 times the same period last year. Container shipping market continue to improve in the first half year as the average value of China Container Freight Index, a measure of shipping prices, grew 133.9% year-on-year, the company said.