By Matthew Walsh and Zhou Wenmin 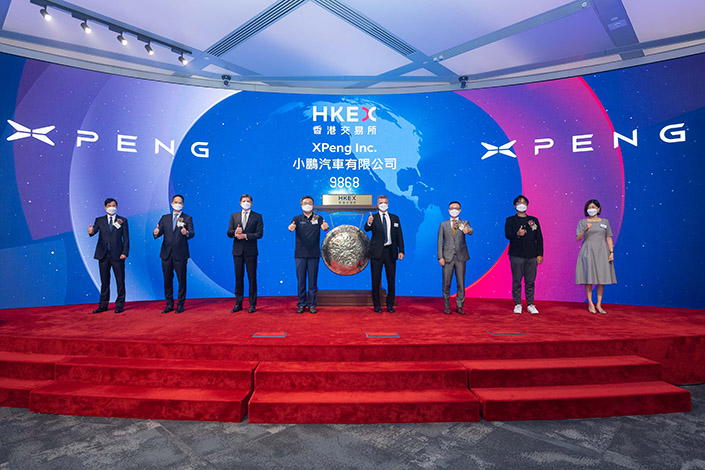 Vice Chairman and President Gu Hongdi said the listing in the Asian financial hub was partly motivated by the ability to build ties with the Chinese mainland’s capital market.Photo: IC Photo

Xpeng Inc.’s $1.8 billion listing on the Hong Kong Stock Exchange has gotten off to a troubled start, with the Chinese electric-vehicle (EV) maker’s share price tumbling by more than 8% Thursday as investors flee from any company at risk from a widening government crackdown on the Asian nation’s tech sector.

The plunge came after the Guangzhou-based carmaker, which listed in New York last year, reversed modest intraday gains of 1.8% on Wednesday to close level with its offering price of HK$165 ($21.24).

The volatility reflected the chill that has swept through Chinese technology equities on both sides of the Pacific in the wake of Beijing’s crackdown on foreign-listed tech titans, notably ride-hailing giant Didi Global Inc., in the past week.

Xpeng executives struck a bullish tone at a press conference prior to the company’s Hong Kong debut. “Whether it’s talent recruitment, the capital markets or user education procedures, today is a fantastic time for the whole smart electric car (industry),” Chairman He Xiaopeng said.

Vice Chairman and President Gu Hongdi said the listing in the Asian financial hub was partly motivated by the ability to build ties with the Chinese mainland’s capital market through the stock connect links, adding that the automaker was also “closely watching A-shares” and would consider a future listing on the mainland “if the time is right.”

Like China’s other two U.S.-listed EV-makers, Nio Inc. and Li Auto Inc., Xpeng recently announced record monthly and quarterly deliveries, shifting 6,565 vehicles in June — a whopping year-on-year increase of 617% — and 17,398 in the three months from May, a jump of 439%. The company, founded in 2014, has never made a profit.

According to a February report by research firm Canalys, China’s fast-growing EV market will grow by around 51% this year to account for nearly one-tenth of all cars sold in the world’s second-largest economy.

But investor optimism has been dampened after a turbulent week in which Beijing has targeted Didi and other U.S.-listed Chinese internet giants, pledging to tighten oversight of data security and overseas listings. The moves have prompted several mass stock selloffs.

Xpeng’s fluctuating fortunes hint at uncertain times ahead for Nio and Li Auto, both of which are believed to be considering so-called “homecoming” listings in Hong Kong to hedge against the risk of being booted off American exchanges.