By He Xinye, Shen Xinyue and Yang Ge 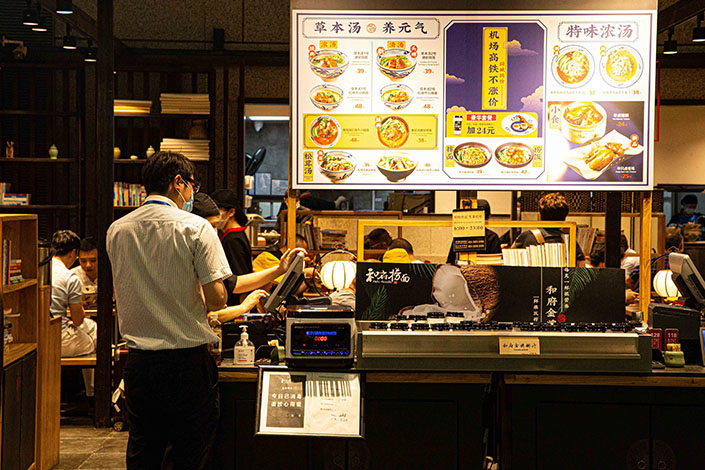 Popular fast food chain Hefu-Noodle announced it has raised 800 million yuan ($123 million) in its latest funding, joining the ranks of a new generation of homegrown Chinese restaurant brands whose rapid expansion has made them investor darlings.

Investors in Hefu’s latest financing round included CMC Capital and ZWC Partners, as well as exiting investors Tencent and Longfor Capital, according to Hefu’s announcement on Thursday.

Since its founding in 2012 and opening of its first store a year later, Hefu has become known for its brightly-lit shops offering various forms of noodles typically costing between 30 yuan ($4.63) and 50 yuan per bowl. The company among a growing number of local restaurant chains tapping into the country’s increasingly discerning middle class.

Such regional and national chains were rare before Yum Brands entered the market with its first KFC outlets in the late 1980s. But a growing number of local favorites have emerged in the last two decades as people eat out more, led by names like the popular Haidilao hot pot chain and pickled fish specialist Tai Er.

Hefu’s latest funding comes less than a year after it raised 450 million yuan last November. Before that it raised about 300 million yuan combined in several earlier funding rounds dating back to 2015.

Hefu has used the funds for a steady expansion that has seen it move beyond its original East China roots in Shanghai into North, South and Central China. The company operated more than 340 stores in 37 cities within 17 provinces at the end of June. It expects to expand at a rapid clip in the second half of this year, aiming to reach a total store count of 450 by year end.

CMC Capital said the chain has posted overall revenue growth of more than 50% in recent years, with average stores now generating about 550,000 yuan in revenue each month.

A number of Hefu’s rivals have gone on to make IPOs, mostly in Hong Kong but also in the U.S. Haidilao raised nearly $1 billion in its 2018 IPO in Hong Kong, and since then its shares have more than doubled. Tai Er parent Jiumaojiu International listed in Hong Kong at the start of 2020, and has seen its shares rise nearly fivefold since then.

Yum also previously spun off its China operations for a separate New York listing in 2016, and the new company, Yum China, made a secondary listing in Hong Kong last year.