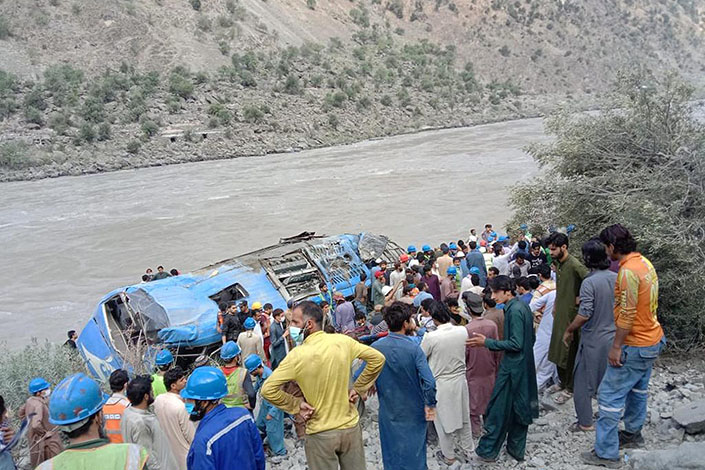 The bus was carrying more than 30 Chinese engineers to a hydroelectric project at the Dasu Dam in Upper Kohistan when the blast occurred.

(Bloomberg) — Pakistan says it cannot rule out terrorism as the cause of a bus explosion that killed 12 people including nine Chinese citizens as China called on the South Asian country to protect projects valued at tens of billions of dollars.

After saying an initial probe indicated the blast Wednesday was caused by a gas leak, Pakistan “confirmed traces of explosives” were found, the country’s Information Minister Fawad Chaudhry said Thursday in a tweet.

“Terrorism cannot be ruled out,” Chaudhry said hours after Chinese Foreign Minister Wang Yi asked his Pakistani counterpart Shah Mahmood Qureshi to quickly investigate the cause of the explosion on a bus carrying workers in the northern Kohistan region, according to a statement from China.

“China is shocked by the serious casualties of Chinese personnel in Pakistan,” Wang was quoted as saying in the statement. “If this is a terrorist attack, the perpetrators must be arrested immediately and be severely punished.”

Concerns are mounting about an advance by the Taliban in neighboring Afghanistan, which threatens to disturb peace across the region. At particular risk are $60 billion of projects in the China-Pakistan Economic Corridor, or CPEC, a crucial part of President Xi Jinping’s wider Belt and Road Initiative.

Pakistan has recently experienced a resurgence in terrorist attacks, complicating Prime Minister Imran Khan‘s efforts to overcome an economic crisis with Chinese help. If terrorists are responsible, it would be the worst attack in Pakistan’s mountainous north since 2013 when gunmen killed nine foreign climbers on Nanga Parbat, the second-highest peak in the country.

The South Asian nation is likely to be among the countries most affected by the U.S. troop withdrawal from Afghanistan as the Taliban continues to capture key districts amid a retreat by Afghan soldiers. The nation suffered from terrorism for more than a decade after supporting the U.S. following the Sept. 11 attacks.