The Struggle to Survive in Zhengzhou’s Flooded Subway 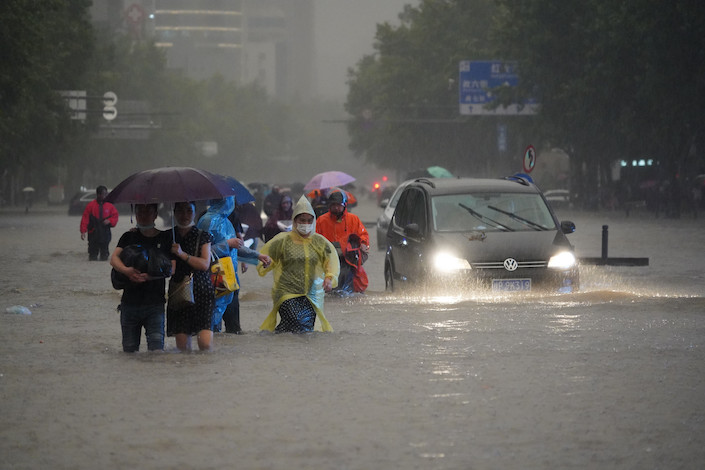 Zhengzhou, the capital of Central China’s Henan province located on the banks of the Yellow River, was hit by record-breaking torrential rain.

Around 5 p.m., Chen finished work earlier than usual to rush home as heavy rainstorms since early morning continued to sweep Zhengzhou. His home near the Rose Park station is seven stops away from the West Zhongyi Road station of Line 5 near his office.

Subway “was the only option at that time as the rainfall was so heavy that cars couldn’t drive,” Chen said. That turned out to be not such a great option either as floodwaters swamped the subway tunnel before his train could reach his stop.

Zhengzhou, the capital of Central China’s Henan province located on the banks of the Yellow River, was hit by record-breaking torrential rain. The storm dumped more than 200 millimeters (nearly 8 inches) of rain on the city in just an hour Tuesday. Some 200,000 residents have been evacuated and a least 25 people were confirmed dead as of Wednesday afternoon.

Across Henan, one of China’s most populous provinces with nearly 100 million people, storms struck cities since the weekend. Heavy rainfall burst the banks of major rivers and flooded streets in several cities, forcing the province to close highways, suspend train services and cancel hundreds of flights.

In Zhengzhou, Wang Qi also boarded a Line 5 train for home about an hour earlier than Chen. The train abruptly halted a couple of times during Wang’s 15-stop trip from the Jingkai Plaza station and was stranded in the tunnel before it could reach the Shakoulu station — Wang’s destination.

Following that stop, the train tried to move on but instead rolled backward, Wang said. After resuming progress briefly, the train stopped again and the driver ordered everyone off.

Follow the driver’s instructions, Wang and other passengers walked along the bank of the tunnel to the Shakoulu station as water flooded through the tunnel. As they walked, the water quickly rose from Wang’s ankle to thigh. Wang finally left the tunnel and reached the station hall.

“There were lots of rescue workers and subway staffers using hoses to help us move,” Wang said after getting out of the station around 7:20 p.m. The journey had taken more than three hours.

On the later train, Chen wasn’t as lucky. Riding in the train’s second car, Chen also felt the train reverse direction after a sudden stop as it moved toward the Shakoulu station. The driver said he would take the train back, Chen said.

“I could feel the engine was started, but the train just couldn’t move,” he said. At the same time, water started filling the car, covering people’s feet. “Everyone was nervous,” Chen said.

The driver then opened doors and told passengers to walk along the tunnel toward the nearest Shakoulu station, according to Chen.

“I walked about 20 meters and saw people ahead turning back, telling us to go back to the train as the flood was coming,” Chen said. After the passengers returned to the train and shut the doors, a wall of water burst through, Chen said.

Water filled the train quickly, forcing Chen and the other passengers to climb onto the seats. The power was cut off, Chen said. Murky water soon rose to Chen’s waist even as he stood on the seat.

“I felt I probably couldn’t make it,” he said. A woman near Chen made a video call to say goodbye to her daughter.

Some passengers started having trouble breathing as the water continued to rise. People tried to smash a window with a fire distinguisher. After one window was broken, “the air came in,” Chen said.

More windows were smashed and people started helping children and the elderly to move closer to the open windows. At the same time, the water finally started to recede, and eventually rescue workers arrived, according to Chen.

Around 9 p.m., the water in Chen’s train car dropped below the ankle, and rescue workers stepped in.

“I felt I could live again,” Chen said.

According to the Zhengzhou government, floodwaters breached defense barriers of Line 5 stations around 6 p.m. Tuesday, forcing a suspension of the entire subway line and trapping passengers. After hours of rescue efforts, more than 500 passengers were evacuated, authorities said. Twelve people were later confirmed dead and five others injured.

Some families are still searching for loved ones. Sha Tao’s wife lost contact with him around 6 p.m. when he was on a Line 5 train. He last called his wife asking her to contact police.

“He said he didn’t feel right, the car was filled with water and his phone was running out of power,” the wife said.

Since that last call, Sha’s family hasn’t heard from him again.