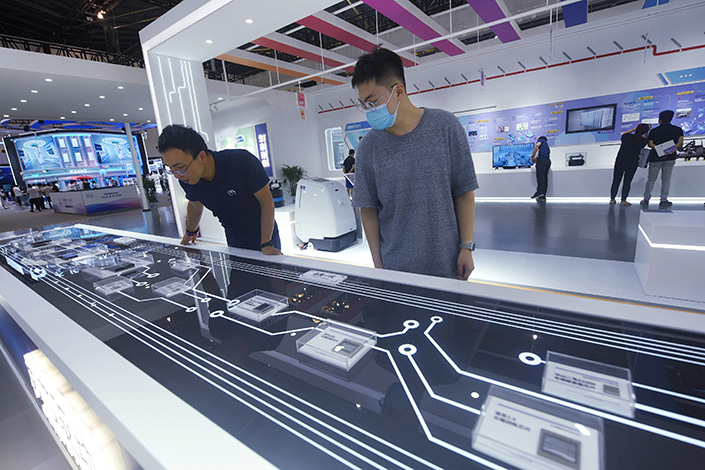 Visitors check out domestically made AI chips at the 2021 Artificial Intelligence Conference in Shanghai on July 7. Photo: VCG.

Although physics professor Dai Xi never saw himself as much of a schmoozer, he had to rethink his priorities once he applied for one of China’s potentially career-changing talent recruitment programs early in his career.

After applying for a program sponsored by the National Natural Science Foundation, Dai watched as his time got gradually eaten up with commitments to hobnob with people with influence over whether his application would be accepted.

It wasn’t until Dai, now at the Hong Kong University of Science and Technology, got word that he was in the program that he was able to return his focus to his research, he told Caixin.

Such socializing is one of several major issues that experts say China needs to address to fix the more than two-decade-long talent recruitment effort to foster scientific and technological innovation, as the issues have hobbled scientific research in the country.

Fixing these issues is crucial to the central government’s goal of achieving technological self-reliance in certain core industries, such as semiconductors, amid an escalating tech rivalry with the U.S. And the problem has been noted at the highest reaches of the Chinese leadership. At a meeting in May, President Xi Jinping called for the establishment of a new evaluation system that focuses on researchers’ innovation capacity and contributions, the state-run Xinhua News Agency reported.

Since 1994, China has launched hundreds of talent programs to attract leading scientists, researchers and scholars from both home and abroad to its institutions, with a special focus on drawing in young talent.

Although acceptance into these programs doesn’t carry quite the same cache as admittance into China’s two top academies — the Chinese Academy of Sciences (CAS) and the Chinese Academy of Engineering (CAE) — getting in usually provides applicants with a similar set of benefits, including a job at an elite university, a higher salary from their employer, and grant funding for their research.

Although China is home to more than 1.8 million researchers, only a fraction of them have been accepted into one of these talent programs. The small number of slots for the programs has left out some talented scholars and researchers who are capable of contributing to the country’s scientific and technological development, experts told Caixin.

For example, young scholars who want to carry out experimental research in the field of condensed matter physics, a kind of basic research, need a large amount of money to build a laboratory, Dai said, which is difficult to achieve unless you’ve already been accepted into a program.

Dai is a member of the National Science Fund for Distinguished Young Scholars (NSFDYS), a talent program launched in 1994 to provide special funding for young scholars who have made outstanding achievements in basic research. In 2020, the program offered 4 million yuan ($618,000) in funding for each winning researcher’s project.

Dai said that more than 10 young scholars in his field in China had at least matched his own achievements at the time he applied for the NSFDYS program a decade ago. However, because the program only accepts a small number of applicants, “about half of these outstanding young people cannot make it, which doesn’t make much sense,” he said.

The acceptance rate for the NSFDYS program was 11.31% on average from 1994 to 2018, meaning that just over one in 10 applicants got funding over the period, Caixin has learned.

Another problem is that the focus on young talent has created incentives that encourage researchers to work in the easiest fields to make their mark as soon as possible, rather than pursuing more difficult areas of study that are more in line with the government’s goal of fostering innovation and technological advancement.

Currently, many programs such as the NSFDYS limit their programs to scholars and researchers under the age of 45, and some programs have taken a more aggressive stance, lowering the cutoff to 38.

Because these programs have application requirements for a large number of research papers to be submitted, some applicants worry that it’s just not possible for them to publish that many papers by the time they are 45. They pursue work on topics that are “not important scientific issues” just because they provide a surer path to getting their work published, said Shao Feng, a member of the CAS. “As a result, their research is just a patchwork. It’s not leading research.”

China’s scientific research community also faces another two issues: uneven resources allocation and a growing number of social activities that researchers and scholars have to participate in.

The talent programs are one of the main ways that scientific research resources get allocated in China, an unnamed university professor familiar with the matter told Caixin.

Like members of the CAS and CAE, researchers involved in a national talent program are able to get their hands on more resources than those who get accepted into a lower-level program, the professor said. However, just because you get admitted into a national program doesn’t mean that you’ll produce outstanding scientific research, leading to a waste in resources that are supposed to be used fostering innovation and technological advancement.

And then there is the problem of schmoozing that Dai described. Having to spend your early career socializing with peers because it might help you get accepted into a talent program is a distraction, Dai said. And it further reduces the quality of the research being produced.