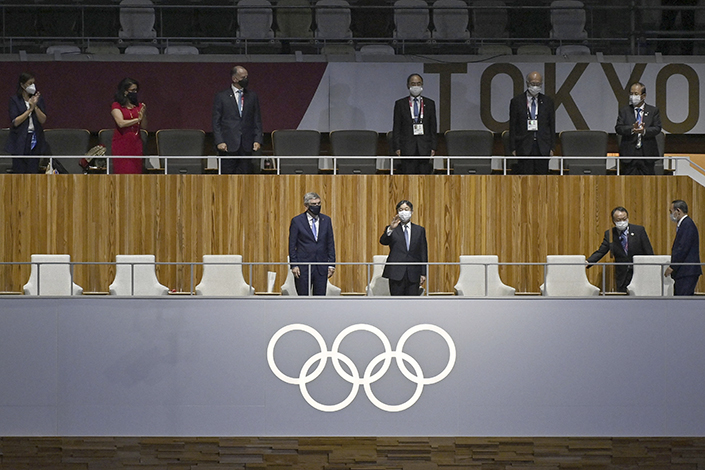 (Bloomberg) — The Olympic opening ceremony kicked off Friday evening in Tokyo, officially marking the start of delayed summer games that have been plagued by scandals.

The event showcasing Japanese culture was held in a mostly empty national stadium after a decision to ban spectators amid the coronavirus pandemic. About 950 people were in the stands, including U.S. First Lady Jill Biden, French President Emmanuel Macron and the Japanese emperor.

The ceremony began with moving geometric shapes drawn in chalk against a blackboard. Dancers used a complex web of red ropes to express the emotional conflict, anxiety and sorrow of those training during the pandemic. Mask-wearing former athletes, including 2000 Olympics marathon gold medalist Naoko Takahashi, carried the Japanese flag into the stadium.

More than 200 nations and groups took part in the athletes’ parade, accompanied by orchestral versions of video-game tunes. The 3½-half hour ceremony was originally 30 minutes shorter, extended to allow social distancing among the athletes, according to local media.

Organizers reported a record number of new daily coronavirus infections linked to the games, including three athletes, bringing the total to 110. One of the infected athletes resides in the Olympic Village.

It’s not just the pandemic that has been disruptive in the lead-up to the event. Ceremony director Kentaro Kobayashi was fired Thursday after a decades-old video surfaced of him joking about the Holocaust. A composer whose music was set to be used also resigned following the emergence of past interviews in which he had discussed tormenting disabled classmates at school.

Various Japan Inc. leaders were also absent, including Toyota Motor Corp. President Akio Toyoda and Panasonic Corp. Chief Executive Officer Yuki Kusumi. Given the public criticism of holding the games in the midst of a pandemic, there’s been a wave of companies pulling out of attending the ceremony, normally a key moment for sponsors.