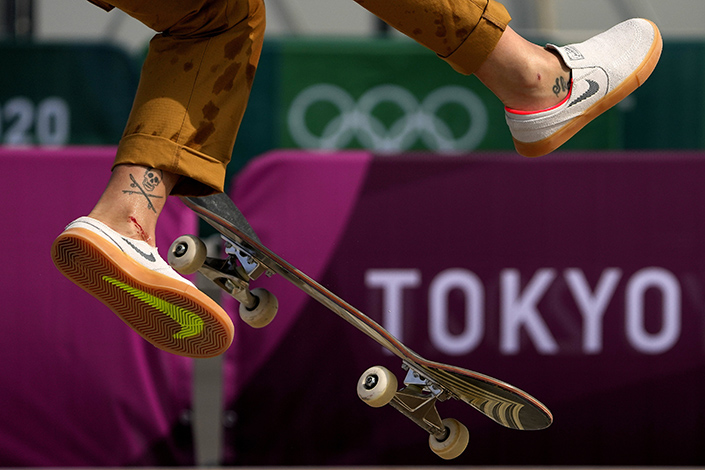 Amid fresh waves of Covid-19 and widening skepticism, Japan is struggling to attract many prominent world leaders or VIP guests to the Olympic Games opening ceremony on Friday.

French President Emmanuel Macron is the only confirmed head of state from a major country, and his attendance is possibly linked to France hosting the next Summer Olympics in Paris. Most other G-20 leaders are absent, including U.S. President Joe Biden and Canadian Prime Minister Justin Trudeau.

South Korea announced Monday that President Moon Jae-in had scrapped his plan to visit Japan during the Games, saying a bilateral summit with Japan was unlikely to be fruitful following a Japanese envoy’s recent gaffe.

U.S. first lady Jill Biden has departed for Japan where she will dine with Prime Minister Yoshihide Suga and attend the opening ceremony at the newly-built National Stadium as head of the U.S. delegation.

Before the pandemic, Japan had hoped to attract as many overseas guests as possible.

Tokyo aimed to invite 100 heads of state or their equivalents during the Games, originally scheduled for the summer of 2020, the newspaper Nishinippon Shimbun reported.

But due to the Covid-19 delta variant surge, visiting guests are well short of this ambitious goal, lagging behind previous Olympic events.

Both opening ceremonies in Beijing 2008 and London 2012 were joined by over 80 leaders. The number of attendees for the Rio Olympics in 2016 dropped to about 40 due to the Zika virus and political turmoil.

In addition to absent political leaders, U.N. Secretary-General Antonio Guterres has abandoned his plan to visit. And the United Kingdom’s Princess Anne, president of the British Olympic Association and only daughter of Queen Elizabeth II, also announced her absence.

Similarly, VIP domestic guests are turning down invitations at the 11th hour.

Toyota Motor Corp., one of the top Olympic sponsors, revealed Monday that its CEO, Akio Toyoda, is expected to skip the ceremony because “the Olympics is becoming an event that has not gained the public’s understanding.”

Furthermore, NHK reported Wednesday that former Japanese Prime Minister Shinzo Abe, holding an honorary position on the Organizing Committee, will not participate in the opening ceremony, which is scheduled to begin at 8 p.m. local time Friday and end at 11:30 p.m.

The National Stadium in central Tokyo was intended to accommodate 10,000 fans and another 10,000 Olympics-related personnel from the International Olympic Committee, athletic groups and sponsors.

But according to TV Asahi, the total will be cut to 950 invitation-only guests, mostly from outside Japan.

Japanese Emperor Naruhito, honorary president of the Tokyo Olympic and Paralympic Games, is expected to attend the ceremony alone, as the Games will be mostly held without spectators. And unlike previous Olympic Games held in Japan, other members of the Japanese royal family will not be attending.