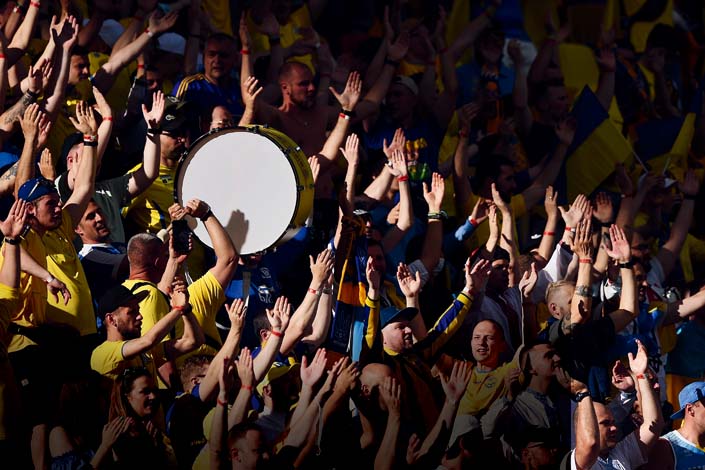 The opening night of Euro 2020 in Rome was more subdued than many had imagined.

Without gatherings of excited fans and fleets of cars decorated with Italian flags, there were few traces of elation in the soccer-obsessed city when the tournament kicked off June 11 with a match between Italy and Turkey.

About 1,000 fans were admitted to a Football Village set up at the Piazza del Popolo to watch Italy’s victory on giant video screens, with masks and social distancing. Seating at the Olympic Stadium where the match was played was limited to 25% of capacity. As Italy is still under a nationwide curfew to control the Covid-19 pandemic, fans had little time to celebrate before midnight.

But the beginning of the UEFA European Championship was remarkable as the first world-class sporting event to return after a one-year delay because of the pandemic. The virus forced a worldwide suspension of major sports and cultural events, from the National Basketball Association to the Wimbledon tennis championships to the Tokyo Olympics.

The Euro 2020 soccer tournament serves as an example of what live sports may be like after the pandemic. The event adopted strict virus control measures, including limits on audience size and compulsory nucleic acid coronavirus tests for all participants. Euro 2020 is following a new format with matches in 11 cities across Europe, allowing host cities to set specific virus control requirements based on local situations.

As outbreaks subside in many parts of the world with the rollout of vaccinations, major sporting events including the Tokyo Olympics are set to make a comeback, although not in exactly the same way as before. The multibillion dollar international sports industry must craft new ways to adapt to the new normal as Covid-19 is likely to co-exist with the mankind for a while, experts said.

Profound changes have emerged over the past year as most live sports were put on hold. In 2020, the Formula One World Championship launched a virtual series to allow fans to race online while the season was disrupted by the virus. The organization’s F1 Esports achieved a record 30 million views across TV and digital platforms during the lockdown.

In tennis’s Australian Open in February, no on-court line judges appeared on any courts to reduce the number of staff on-site. Instead, live electronic line calls delivered through remote tracking cameras were introduced.

The Covid-19 pandemic forced sports regulators, organizers and clubs to rethink old routines that have been inefficient and make changes to better adapt to reality, according to Simon Chadwick, director of the Centre for the Eurasian Sport Industry at the Emlyon Business School near Lyon in France.

Authorities around the world are adjusting city development plans amid the pandemic. A study by PR agency BCW last year estimated that 43% of global cities would reduce their 2021 budget for organizing large-scale public events, and 17% of them would do so in 2022. As cities’ enthusiasm for international extravaganzas cools, they will focus more on events serving local people, the study found.

Cities’ interest in hosting the Olympics was already in decline, partly reflecting the ballooning costs, said Andrew Zimbalist, an economics professor at Smith College in Massachusetts who has written several books on Olympics finances.

Over the past 15 years, the costs of building stadiums for the Olympics have surged to nearly $16 billion, not to mention greater spending on other infrastructure. However, the average revenue of a Summer Olympic Games is only $5 billion, according to Zimbalist.

Mass gatherings for sporting events almost disappeared from stadiums when the pandemic started raging around the world in spring 2020, forcing countries to resort to lockdowns and border closures.

In mid-March 2020, the Union of European Football Associations (UEFA) announced a one-year postponement of the Euro2020 tournament, which was scheduled to start that June. It was the first time for the event to be delayed since it was launched in 1958.

Following that decision, UEFA halted almost all major matches in Europe. Similar suspensions were announced in the Americas, Africa and elsewhere.

The most prominent suspension was the Summer Olympic Games scheduled to open in July 2020 in Tokyo. In late March 2020, organizers agreed to an unprecedented postponement until July 2021. The International Olympic Committee had never delayed the Olympics by a year or more, though previous games were canceled, such as the 1940 and 1944 Olympics during World War II.

Postponing the Olympics was also a difficult decision for the administration of former Japanese Prime Minister Shinzo Abe, which was counting on the event to bolster the government’s public support and reinvigorate a shrinking economy. Abe resigned in August citing health reasons as Japan struggled to curb the outbreak.

Japan had spent more than $26 billion preparing Tokyo for the games, according to some estimates. With about 600,000 foreign visitors and more than 11,000 athletes expected to attend, the games were expected to generate $1 billion in ticket revenue. Japanese companies poured enormous amounts into expanding their visibility at the event, signing a record $3.3 billion of sponsorship deals.

“Holding the Olympics is a widely recognized success as it shares joy among everyone,” said Ryoichi Kasuga, a former member of the Japan Olympic Committee. “But the pandemic tells us that the situation may not be as sweet as imagined, and economic prosperity and human happiness may not be the same thing.”

The virus disruptions struck a hard blow to the global sports industry. In Europe, most soccer clubs have been struggling to survive after the broad suspension of matches, according to Emlyon Business School’s Chadwick.

Sports broadcasters also faced huge losses on the vast sums they paid for media rights. For instance, Chinese sports media company Wuhan DDMC Culture & Sports Co. Ltd. reported a 67% revenue decline in first half of 2020 with a net loss of 536 million yuan ($83 million) because of business disruptions caused by the delayed Euro 2020 and Olympic games.

Progress in vaccinations fueled hopes that life is returning to normal as outbreaks wane. Since April, the European continent has recorded declines in Covid infections and deaths, encouraging more countries to relax virus control measures.

As of June 17, 47.1% of the population of the Group of Seven wealthy countries received at least one shot of Covid vaccine, according to the Financial Times.

The June opening of Euro 2020 marked a long-awaited comeback of top-level sports events. As one of the world’s most successful commercial sporting events, Euro 2020 means a lot to the economies of hosting countries. In 2016, the tournament generated 1.2 billion euros ($1.4 billion) of revenue for France and created 54,000 jobs. With greater costs for virus control, industry experts estimated that this year’s games could generate revenue of about 2 billion euros, compared with a previously projected 2.5 billion euros.

The Summer Olympics set to open July 23 in Tokyo will be a more challenging test for the Japanese government as more than 18,000 global athletes and support staff are set to gather for the event.

The pandemic has shown signs of easing in Japan after an escalation in May. The government lifted a months-long state of emergency in cities including Tokyo earlier this month. But sporadic flare-ups and the spread of the highly transmissible Delta variant are fueling safety concerns.

The Japanese Olympics organizer outlined measures to safeguard the event, including restrictions on athletes’ movements, routine virus tests and limits on audience sizes.

Spectators from abroad were barred from the games, while as much as 50% of a venue’s capacity — up to 10,000 people — will be allowed for domestic spectators. However, if the pandemic worsens, the games could be held without spectators, Seiko Hashimoto, president of Tokyo 2020, said last week.

The International Olympic Committee estimated that 80% of athletes attending the games would be vaccinated, although inoculations aren’t required. Many health experts questioned whether the goal can be achieved amid uneven vaccine supplies worldwide.

Japan itself has maintained a relatively slow pace of public vaccinations. As of June 20, only 7.2% of the population was fully inoculated with 17.7% receiving the first shot, according to One World in Data.