Reporter’s Notebook: Tokyo Is in Danger 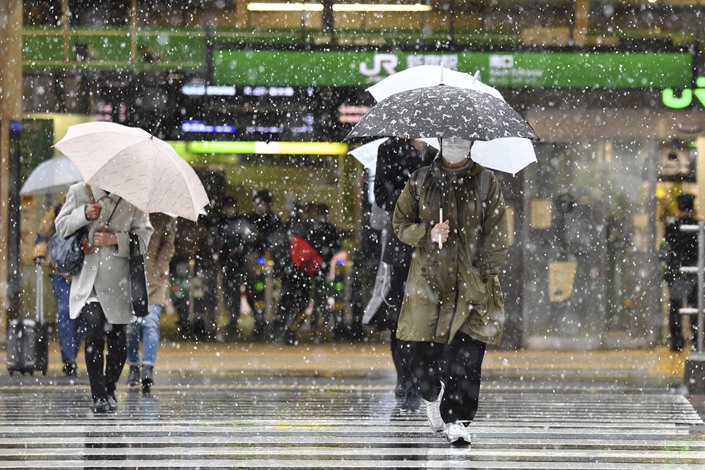 It feels surreal. With the recent March 20 equinox, spring had arrived in Japan’s capital. In Shinjuku Central Park, in the renowned commercial and administrative center of Tokyo, about a dozen parents with kids visited the playground while many sat and looked at the blooming cherry blossoms. Only half of them wore masks.

As the new coronavirus strikes fear into the rest of the world, in Japan, “hygiene fatigue” is instead taking hold, and with it, Tokyo’s epidemic situation is worsening.

As of late, compared to other countries, Japan had fewer reported cases. As of March 22, Japan’s domestic confirmed cases of Covid-19 just barely surpassed 1,000 — not including those from the Diamond Princess cruise ship. By now, a warning that the country’s health experts gave in late February about the following two weeks being a “key epidemic prevention period” had already expired.

Japanese education minister Kōichi Hagiuda previously said that, as there was no spike in cases, all classes in Japan would resume in April. Without legal enforcement, some people were neglecting standards of personal hygiene.

And yet, just in the past week, the situation in Japan has taken a turn for the worse.

On Tuesday, Japanese Prime Minister Shinzo Abe personally suggested to the International Olympic Committee, which governs the world’s largest sporting event, that the Tokyo 2020 Games, to be held July 24, should be postponed to 2021. This was soon approved.

Ever since Abe broached this subject, the numbers of new cases in Tokyo have steadily risen. Between March 23 and Thursday, the numbers of reported daily new infections were 16, 17, 41 and 47. Then on the Saturday, this number reached 63, bringing Tokyo’s total to 362, making it the worst-hit part of Japan. That same day, the nationwide total had risen to 1,725 after only surpassing 1,000 just over a week prior.

Yuriko Koike, the governor of Tokyo, discussed the possibility of a lockdown for the first time on March 23. Then at an emergency press conference Thursday, she warned that the region, with some 13.9 million inhabitants, has entered a “phase of severe outbreak” and asked residents to avoid leaving their homes for nonessential reasons.

Japan’s health ministry had forecast that in the week starting March 26, Tokyo would see 159 new cases. For the week of starting April 2, it predicted a total of 320 new cases. In practice, the pace at which new cases have emerged has not only surpassed the prediction, but done so at nearly double the rate.

According to the report, if the speed of the outbreak cannot be curbed, there may be a spike in cases in Tokyo, at which point a lockdown may be inevitable. That’s a sentiment echoed by Koike and the Tokyo Metropolitan Medical Association.

The news sent shockwaves through residents.

After panic-buying masks in January and toilet paper in February, following the March 25 press conference, locals panic-bought everything else. At a grocery store near my home, everything, from vegetables and fruit to meat and pasta were gone. One celebrity remarked on Twitter that he waited 30 minutes to enter a store and an hour and a half at the checkout counter, likening his experience to going to Disneyland.

As of Sunday, Tokyo replaced Hokkaido and Osaka as the epicenter of Japan’s epidemic — it reported 362 new cases the previous day, doubling in the total set in the previous five days.

This past weekend, the atmosphere was the exact opposite of that of the previous one. Fear hung in the air. Department stores and other shops, including food and beverage locations like Starbucks, have all closed; the streets were deserted. When I took the subway on Saturday, the cars were largely empty and all the windows were ajar for ventilation. It’s hard to imagine that this was Tokyo’s peak tourist season.

Since the arrival of the disease in January, Japan’s strategy has focused not on grasping the true number of cases, but rather on controlling clusters. But now it would seem that this method isn’t enough, at least in a place like Tokyo. Between March 22 and Thursday, new cases detected in Tokyo without clear paths of transmission reached 40% of the total. An explosive outbreak has grown increasingly likely.

Some have speculated that Japan has restricted testing in order to keep the numbers low in light of the Olympics. According to official data, Tokyo only tested 100 individuals a day, of which about 40% were positive.

The head of Japan’s National Institute of Infectious Diseases had rebutted these claims in an open letter published at the beginning of the month, saying that Japan’s measures were in line with standard practices. Rather than deal with all patients, it attempts to focus on those who are infected, their close contacts and suspected cases. Japanese citizens who wanted to be tested were referred to the country’s 860 dedicated referral centers to be assessed for screening.

As of Feb. 25, staff at these centers told me that the number of tests were limited and that only those “very likely” to have been infected could get tested.

In order to meet the criteria, a person must have had a fever of at least 37.5 degrees Celsius for four days in a row; have experienced strong fatigue or difficulty breathing, have been in contact with someone from a hard-hit region such as China; and have tested negative for diseases such as the common flu. According to the staff member, the fourth criterion was added Feb. 17.

What’s more, the transparency of the Japanese government leaves a lot to be desired. At a call center in an office building near my home, there was an incident where at least eight individuals were infected. Official announcements have so far not revealed these details.

An independent political candidate in the district told me that he suspected this deliberate kind of low-key posture was precisely because of the Olympics.

And yet, a lockdown in Tokyo would be hard to fathom.

Unlike Wuhan in China, or Daegu city in South Korea, or Italy’s Lombardy region, Tokyo is Japan’s only political, financial and cultural center. A lockdown will also affect individuals in the city’s surroundings, especially the millions who commute daily from nearby Kanagawa, Saitama and Chiba prefectures.

Japanese law does allow the government to declare a state of emergency and force compliance in manners such as making people stay at home, as well as closing schools, retirement homes, concert halls, fitness facilities and more. It can also allow the expropriation of land and buildings for medical purposes.

What a difference two weeks makes.