By An Limin and Matthew Walsh 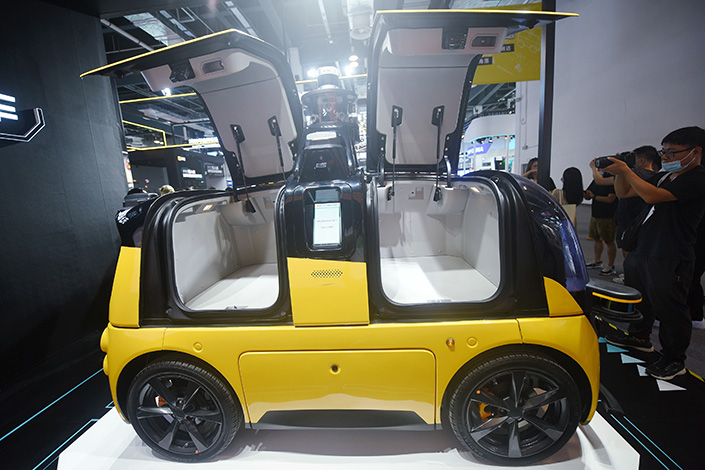 Meituan and Li Auto Inc. have signed an agreement allowing the food delivery giant to use the carmaker’s intellectual property (IP) to develop autonomous delivery vehicles.

The Beijing-based electric-vehicle (EV) maker disclosed the tie-up in a filing ahead of its newly approved dual primary listing in Hong Kong.

The agreement was sealed on June 3 and runs until the end of 2023, the filing said. It allows Meituan to develop its own products based on Li Auto’s IP left over from an abandoned smart electric vehicle project. Meituan and its CEO, Wang Xing, respectively hold 13.23% and 6.76% stakes in the automaker.

Meituan will pay Li Auto a fee based on both an undisclosed rate and the number of vehicles it produces based on the licensed IP, according to the filing. The carmaker expects the deal to bring in 500,000 yuan ($77,208), 10 million yuan and 27.5 million yuan in the three years through 2023.

Li Auto developed the smart electric vehicle, which the filing refers to as the “SEV model,” soon after its establishment in 2015. The low-speed, two-seater was designed for use by businesses, for example at automated delivery junctions or storage centers, and not for road use by the general public.

The firm discontinued the project three years ago due to concerns about China’s regulations for low-speed EVs and the SEV model’s commercial potential. The company said in a recent disclosure that the initiative made a loss of 200 million yuan.

The IP licensed to Meituan includes the SEV’s whole-vehicle design plan, molds and toolings, and the design plans of vehicle parts, the filing says. It also comprises testing reports, functionality analyses and information about suppliers.

The licensed IP is not used in or relevant to Li Auto’s flagship SUV — the Li One — or any other models currently in development, the company said, adding that Meituan has indicated that it will only develop the SEV model for its own internal use.

Li Auto has received the green light for its Hong Kong listing, according to updated documents published on the exchange’s website Monday. The carmaker aims to follow on the heels of domestic rival Xpeng Inc., which completed a $1.8 billion flotation in the Asian financial hub last month.

Li Auto is moving forward with the so-called “homecoming” flotation amid an ongoing Chinese government crackdown on overseas listings that have weakened the share prices of some of the Asian nation’s biggest firms.

One of those most recently affected is Meituan, whose Hong Kong-traded equities have plummeted by nearly 30% this week after Beijing ordered the company to pay social insurance for its delivery drivers, a requirement that could significantly raise costs. The rout has wiped more than $60 billion off Meituan’s market capitalization.

Li Auto’s Nasdaq-listed shares edged up 1.62% to $30.77 on Monday, clawing back some of their value after declining by 8.05% on Friday as investors got jittery over the regulatory clampdown.

Neither Li Auto nor Meituan responded to Caixin requests for comment prior to publication.