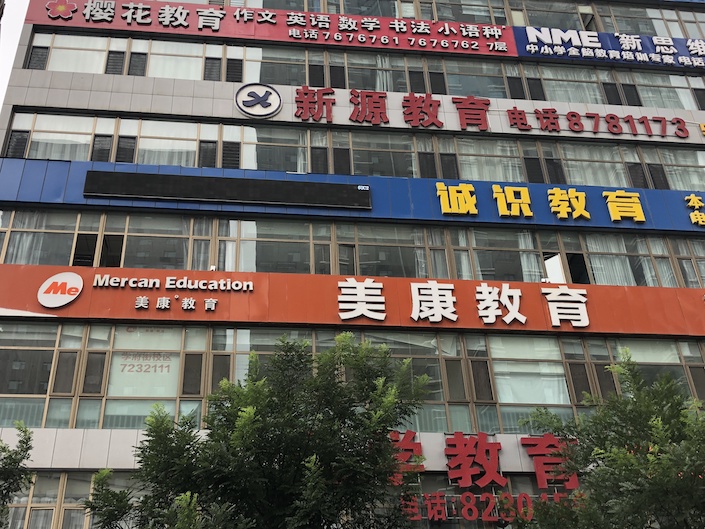 China’s launch of new regulations for the after-school education sector prompted the collapse of U.S-traded Chinese education stocks, spilling over to Chinese enterprises in other sectors. Foreign investors are withdrawing from sectors they don’t seem to understand that were also affected by the new regulations.

The top-down changes in the education sector and the reorganization of the after-school training industry have gone beyond the administrative scope of the Ministry of Education. The ministry is a core execution unit, while other ministries and regulators will also be engaged under the coordination of the central government.

The educational issue is thus in fact a political one rather than a simple policy issue addressing a single sector.

Over the past few years, China’s economic, industrial and social policies have in fact been macro-political policies backed by a complete set of ethics, logic, values and targets. Companies and investors failed to understand these policies from a political point of view.

Take real estate. In 2016, the central government put forward the principle that “houses should be used to live in, not to invest in” and implemented strict controls. However, most people believed that China’s “pro-development” approach would always outweigh “structural adjustments” and thought real estate policies would be eased when economic growth slowed. No one saw the issue from a national strategy or basic state policy point of view.

When the China-U.S. trade war entered the “chilly winter” at the end of 2018, most people believed that the central government would ease regulation of real estate in 2019. However, the central government immediately imposed even stricter measures, far beyond market expectations. Similarly, when the pandemic broke out in 2020 and after the release of liquidity to support the real economy, real estate developers obtained low-cost financing and the property market recovered. Then the central government swiftly issued a number of policies, such as the “three red lines” and caps on property loans.

Now, we should be able to see that real estate control is a macro-political strategy and basic state policy. It has taken nearly five years to make everyone realize that.

Sectors like gaming and movie entertainment have previously been hit by similar crackdowns. In the beginning, people tried to interpret individual cases and failed to understand the issues from a political viewpoint. They didn’t see this is a new era and that China’s model is different now.

If controls on the real estate, gaming and entertainment sectors affected mostly domestic companies and investors, the suspension of Ant Group’s initial public offering last year, followed by a series of industry policies aiming to restrict uncontrolled expansion of capital—from restrictions on internet platforms and antitrust to the focus on data security—have far-reaching impacts on more companies and the capital markets.

The five-years of “real estate control” since 2016 has been a gradual process aiming to achieve a soft landing as the real estate industry affects financial and economic safety and stability. Because real estate accounts for a large share of the national economy, the adjustments to policies for new economic industries seem to be more abrupt and intense. A large number of policies seem to be issued out of nowhere, bringing great policy uncertainty to industrial development, while most of these companies tap offshore financing and trade shares in the U.S. Overseas investors cannot digest the large amount of information. What the financial market fears the most is uncertainty. Investors will hold back if they do not have a clear picture.

Let’s get back to the after-school training industry. In my view, the restructuring of the industry is also a macro-political issue, just like real estate controls. Chinese leaders have a broader top-level logic on how students should be educated in China.

1) Is education a core social resource significant for maintaining social stability and promoting common prosperity? More specifically, how can greater equality of opportunity be created for society? In other words, should a household’s financial situation affect children’s access to educational resources? Even though gaokao (the national college entrance examination) determines students’ futures to a large extent, “interventions” have great effects on children’s academic ability. However, attending after-school training classes or buying school district houses is closely related to a family’s economic resources. Enhancing the equality of opportunity is very important to prevent class immobility, improve social mobility and maintain social vitality.

2) How should children spend their time during their growth from age 3 to middle school age? Should we provide them with all-round education and help them explore their interests and guarantee their mental health and joy, or prepare them for the gaokao from age 3, pushing them in endless competition or involution? Can students cultivated in that way truly adapt to the future?

3) What does education offer? Should it be subject to regulation and match the China Model? I believe that leaders are especially concerned about the education of the children of the social elites — including entrepreneurs, company executives and well-paid professionals. Do their children receive Western educations or Chinese educations? If they receive systematic “international education,” how can we guarantee their affiliation and loyalty to the country?

4) How should resources be allocated in the education system, and what kind of industrial policy should be applied? First of all, what is the role of public schools? Should they shoulder more responsibilities and provide high-quality, equal, free public education? Is it possible to balance educational resources via the internet and new technologies?

5) What role should social capital play in education? Finance and capital are certainly profit-driven, so interventions in education will definitely make education more industry-oriented and profit-driven. Capital support will also trigger fiercer and more vicious industrial competition, which has an impact on consumers. The central government hopes to cut ties between finance and education to prevent the disorderly expansion of educational industrialization caused by disorderly capital expansion. In addition, shares of most after-school training companies are traded overseas, mostly in the U.S. In my opinion, this is not an issue concerning data security or national security. Instead, as long as the whole capital chain that industrializes education is offshore and beyond the regulation of the Chinese government, China cannot delink finance and education and cannot realize its goal of reshaping the education system. As a result, foreign investment and financing must be restricted from entering the education and training sector.

Chinese people put great importance on education, a core cultural value. So we will never cease scrambling for educational resources and as a result are trapped in involution, draining our resources. To understand the education system, we need to look at it from the highest political standpoint.

What approach will China take to select talented people? It will still be gaokao. As a talent selection system, gaokao is an inevitable choice for China to pursue educational equality, making it absolutely irreplaceable. This relatively open, transparent and standardized system allows people to prepare in advance, but when more and more people participate in preparation training, involution will inevitably emerge. What can be done if we are to keep gaokao while restructuring the after-school training industry?

There are two solutions. The first is to reorganize after-school training for students before attending senior high schools through national controls. The second is to ensure the general public of more high-quality, free, balanced educational resources by means of a national system and the internet. Could these measures eliminate extracurricular training altogether? The answer is definitely no. As long as there is demand, extracurricular training will exist underground and continue to make profits. But I believe that most families would be satisfied if the country could provide balanced, free, high-quality public education in primary and middle schools.

Now, let’s look at the China Model of the new era, which has some very clear characteristics.

2) China regards expanding the majority’s welfare to the utmost and realizing equal access to opportunities and common prosperity as its objectives, which should be attributed to our traditional culture and our socialist system.

3) Traditional Chinese culture regards the country as an organic and vital society of coexistence, in which harmony is key. Capital and enterprise are also part of society. We need to have political consciousness and view problems from the perspective of the well-being of the country, society and people.

4) In fact, China is a society “ruled by morality,” meaning that behind everything is a higher and more abstract ethic and logic — the so-called “high morals,” which are the spirit that guides us. This moral system operates outside the legal system.

This China Model is hard for Westerners to understand as they comprehend things based only on written laws and rules. They believe in the principle of “what the law does not forbid is permitted” and that laws and rules should not be arbitrarily changed. Foreign investors can perceive only the “arbitrariness” and uncertainty of policies. That makes it natural for them to withdraw capital.

In this process, at least in the short run, companies that have already sold shares abroad and hope to obtain overseas financing will suffer a lot. But none of this matters much to the Chinese government.

In fact, as long as we understand China, the central government’s governance philosophy and top-level logic, we will see that there are many certainties behind investments in China.

China used to call for young people to “go to the countryside, go to the border areas, and go where the motherland needs us most.” It can be also applied to making investments and running enterprises in the new era. Now it is the trend to devote ourselves to industries that are in line with the central government’s policies and with the new pattern of future development.

Ren Yi, a graduate of Harvard University's John F. Kennedy School of Government, is an influential Chinese blogger who has more than 1 million followers on Weibo.