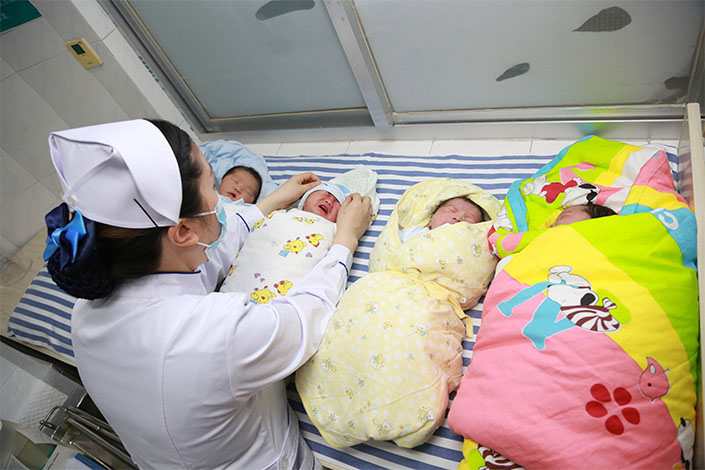 A small city of 1.2 million people in Southwest China’s Sichuan province has become the first jurisdiction in China to offer a cash incentive to families to have two or three more children after the country announced a third-child policy to boost population numbers.

Local authorities in Panzhihua said at a press conference Wednesday that families who give birth to a second or third child from June 12 will be granted a subsidy of 500 yuan ($77.40) per month until the child is aged 3. This means that for each child, families will receive a total subsidy of 18,000 yuan.

The subsidy will go to parents who have local household registrations, or “hukou,” and have been registered in the local social insurance system, authorities said. The second and third children will also be required to hold a local hukou in Panzhihua.

The incentive, along with other measures (link in Chinese) such as providing free hospital birth delivery services for pregnant women, aims to help the city cultivate talent through population growth. It comes after China earlier this month rolled out a basket of supportive measures, including deducting certain childcare expenses, to encourage people to have more children after the May announcement of the third-child policy.

Panzhihua is expected to have 1.5 million permanent residents by 2025, according to its development plan, said Shen Jian, secretary general of the city government. However, the seventh national census showed the city had 1.21 million residents in 2020, which means there’s still a gap of about 300,000 people.

China has so far rolled out several economic incentives, such as housing benefits and tax exemptions and cuts, to boost births, Caixin has learned. However, Panzhihua is the first location in China to offer a childbirth bonus.

The decision “set a precedent” for future childbirth policies, said Huang Wenzheng, a senior researcher at Beijing-based think tank the Center for China and Globalization. It is of great importance to encourage more births under the country’s current demographic trend, he said.

China is experiencing a declining birth rate, according to its national census. The number of newborns in the country fell for four straight years to 12 million in 2020, with a fertility rate of 1.3 for women of childbearing age, far lower than the expected rate of 1.8. At the same time, the aging population continued to grow.

Subsidizing a couple’s second and third children is a policy with low costs and positive effects in spurring births, Huang said, suggesting more places could adopt such a policy.

In recent years, many advocates like Huang Xihua, a deputy to the National People’s Congress from the southern province of Guangdong, has called on the central government to provide childbirth subsidies.

Although supportive measures to increase births should be coordinated at a national level, they also need to be explored and experimented with by local governments based on their specific situations, demographer He Yafu said.

He cited the example of neighboring Japan whose population has rapidly aged. Japanese women giving birth are granted a subsidy of about 25,000 yuan while children can also obtain subsidies at different stages of growing up.