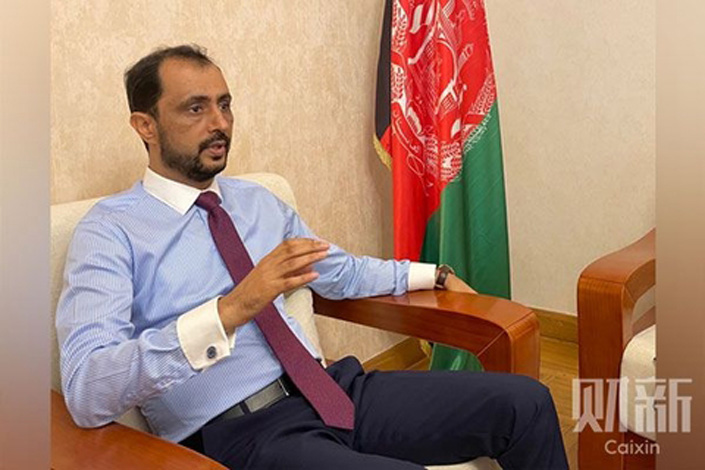 Afghanistan is willing to cooperate with China and the U.S. in the fight against terrorism, a main problem the country is facing now in establishing peace as the U.S. withdraws its troops from the country, Afghan Ambassador to China Javid Ahmad Qaem told Caixin in an interview.

The Afghan envoy also hopes China could help the Afghan government build mutual trust with its neighbor, Pakistan, as Beijing is trusted by both Kabul and Islamabad.

Qaem said his country also hopes to be engaged in more economic cooperation and trade with China. Currently, Afghanistan is an observer state in the Shanghai Cooperation Organization (SCO), a multilateral association for security and stability in Eurasia. Afghanistan hopes to become a full member of the organization to be part of the decision-making process, he said.

After the withdrawal of American troops from Afghanistan began in May, growing violence in the country has raised concerns around the world. The Afghanistan government and Afghan Taliban have been engaged in peace talks, but little progress was made.

China has expressed concern with the situation in Afghanistan after the withdrawal of U.S. troops and has actively engaged in dialogue with the relevant parties.

In a meeting of foreign ministers of the SCO-Afghanistan contact group in mid-July, Chinese Foreign Minister Wang Yi put forward five proposals, including preventing the resurgence of terrorist forces in the country.

“Afghanistan should never again become a source of terrorism or a gathering place of terrorist forces,” Wang said. “The SCO should step up counter-terrorism cooperation with Afghanistan and urge the Taliban to honor its commitment to break with international terrorist organizations.”

Late last month, Wang met a nine-member Taliban delegation led by Mullah Abdul Ghani Baradar in the northern city of Tianjin, during which he called on Taliban to “completely” cut ties with all terrorist forces, including the East Turkestan Islamic Movement. Taliban should also “resolutely and effectively” crack down on terrorist forces to remove obstacles to regional security, stability and development, Wang said.

Regarding counterterrorism, countries including China, Russia, the U.S. and Pakistan are all “on the same page,” Qaem said. “I believe that Afghanistan is one of the areas that China and U.S. can cooperate with each other. And we would love to be part of the cooperation,” he said.

On June 3, at the 4th China-Afghanistan-Pakistan Trilateral Foreign Ministers’ Dialogue in Guiyang, Wang put forward five ideas and propositions, which include maintaining intra-Afghan talks, bringing the Taliban back into the political mainstream and strengthening cooperation among China, Afghanistan and Pakistan.

And at the July meeting of the SCO-Afghanistan contact group, Wang also stressed the importance of the SCO in contributing to peace and reconstruction in Afghanistan.

Qaem acknowledged the importance of the SCO in regional security. The organization can also be a platform for spurring economic activities in Afghanistan, which sees China as a good market for Afghan commodities, he said.

“We talked to them, because we are a legitimate representative of the people of Afghanistan. And we know people want peace,” he said. “So if there is a 1% chance, or if we believe that there is a 1% chance of something that can take us to peace, we don’t want to lose that.”