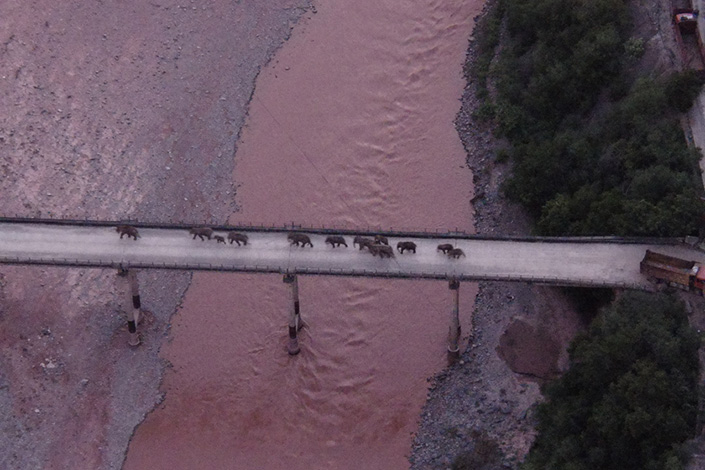 After trekking more than 500 kilometers through Southwest China, 14 elephants who captivated the world this summer for straying close to major urban areas are being guided home. The herd is now little more than a dozen miles away from the outer reaches of their natural habitat.

Guided by trucks, the wild Asian elephants crossed the Yuanjiang river on Sunday night, according to video footage provided by the province’s forest fire brigade.

A notice (link in Chinese) issued by local authorities said the elephants, including three calves, were in good condition and no animal or human casualties had been reported. The notice said their progress was “significant” and that authorities would continue in their efforts to help the elephants return home as soon as possible.

The elephants were later monitored wandering into a forest about 26 kilometers (16.2 miles) away from a county in Pu’er City which neighbors Xishuangbanna, Yunnan’s southern-most prefecture from where the animals came.

Since leaving the area in March 2020, the elephants marched north for more than 500 kilometers, traveling through jungles, fields and villages. In April this year, they crossed the Yuanjiang river for the first time on record.

Experts believed the river would be an obstacle to the elephants’ return. The hope was that their way north would be blocked, allowing people to use incentives to lead the elephants “all the way south” to their natural habitat. However, rising waters during the rainy reason would have made it difficult for the calves to wade across, said Chen Mingyong, professor of the School of Ecology and Environmental Science at Yunnan University.

Chen said human efforts to guide the elephants back home have cost a lot in terms of time, human resources and money. Since June 2, local authorities have deployed drones and vehicles to monitor them and evacuate roads and residents. They have also prepared copious food including pineapples and corn to feed the animals.

Although the herd turned south in part due to these efforts, they remained far from their natural habitat. Early last month, a runaway young male elephant, part of the herd, was captured and sent to Xishuangbanna, while the other 14 wild Asian elephants stayed on in Yuxi, a prefecture-level city hundreds of miles away from Xishuangbanna.