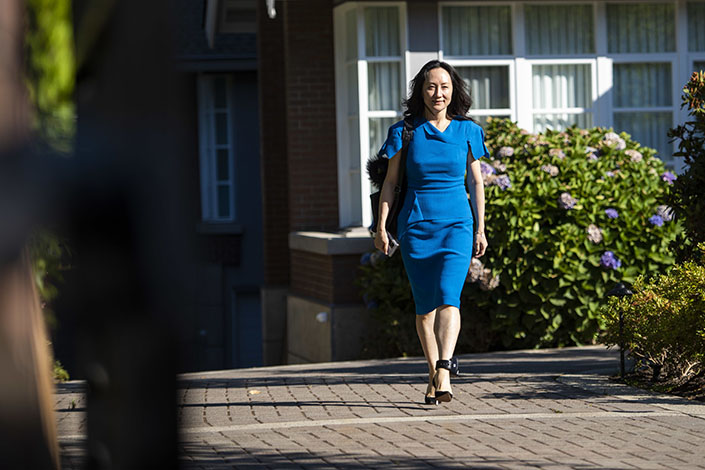 (Bloomberg) — Lawyers for Huawei Technologies Co. Ltd.’s chief financial officer made a final push for a Canadian court to reject a U.S. extradition request, as Beijing raised pressure on Ottawa by advancing a series of criminal cases against Canadian nationals.

Meng Wanzhou’s defense lawyers argued that allowing her to face fraud charges in New York would encourage improper demands by American authorities. The U.S. “is not in charge of policing the world,” and halting the extradition was the only way to remedy alleged abuses by U.S. and Canadian authorities, lawyer Tony Paisana told a judge in Vancouver on Monday.

“Misconduct of this sort cannot ever be tolerated, for to do so is to condone, perhaps even to invite, similar conduct,” Paisana told Associate Chief Justice Heather Holmes in British Columbia Supreme Court.

Meng has been fighting extradition since her arrest in Vancouver at the request of the U.S. two and a half years ago. American prosecutors claim she lied to HSBC Holdings Plc about Huawei’s operations in Iran as part of a scheme to violate U.S. trade sanctions. The Chinese Communist Party views her case as a politically motivated attack on one of its chief technology champions.

In China, a court on Wednesday is expected to issue a verdict in a spying trial against Canadian Michael Spavor, some 24 hours after a fellow citizen convicted of drug trafficking had his death sentence upheld. Canadian Foreign Minister Marc Garneau condemned the decision Tuesday to reject Robert Lloyd Schellenberg’s appeal and urged Chinese authorities to grant him clemency.

“I don’t think it’s a coincidence that things are happening right now while events are going on in Vancouver,” Canadian Ambassador Dominic Barton told reporters Tuesday in China.

Spavor, who organized trips to North Korea, faced a trial in March on allegations that he stole and illegally provided state secrets to other countries. He was detained along with Michael Kovrig — a Hong Kong-based analyst at the International Crisis Group and former Canadian diplomat — days after Meng’s arrest in late 2018, and has been jailed ever since.

The Canadian side hasn’t received any indication on the timing of Kovrig’s verdict, according to Barton. People convicted of serious violations of the section of law cited by Chinese authorities face 10 years to life in prison.

The timing of the legal proceedings in China poses a major challenge for Canadian Prime Minister Justin Trudeau, only days before he’s expected to call an election for September. The issue has become a major political vulnerability for the prime minister, who had sought to deepen ties with the Asian country early in his tenure only to see relations deteriorate dramatically.

Trudeau’s government has criticized the Chinese prosecutions as arbitrary. U.S. President Joe Biden last week reaffirmed his opposition to the detentions of Kovrig and Spavor during a call with Trudeau and reiterated his pledge to push for their release.

Meng, who could face up to 30 years if convicted in the U.S., denies any wrongdoing. Her legal team argues that Canada is not bound to honor its extradition treaty because U.S. officials, from the president on down, acted dishonorably.

Lead lawyer Richard Peck cited remarks by former President Donald Trump and then-Secretary of State Michael Pompeo following Meng’s arrest that indicated Washington was ready to intervene in her case, if it would further American foreign policy and trade interests.

“When before has a head of state interfered with an extradition?” Peck said, adding that such remarks had reduced his client to a political “bargaining chip.”

The defense claims Meng’s rights were violated, alleging that:

* U.S. authorities misrepresented their case against her to the Canadian government

* Trump and Pompeo tainted the process with their public comments

* The U.S. lacked jurisdiction over her alleged offense, which took place in Hong Kong in 2013

Prosecutors say the only misconduct was the improper sharing of Meng’s telephone pass codes between border services officers and police.

“The RCMP were forthright in their testimony and admitted to errors where appropriate,” Frater told the court. “They made reasonable choices about how to proceed in a novel set of circumstances.”