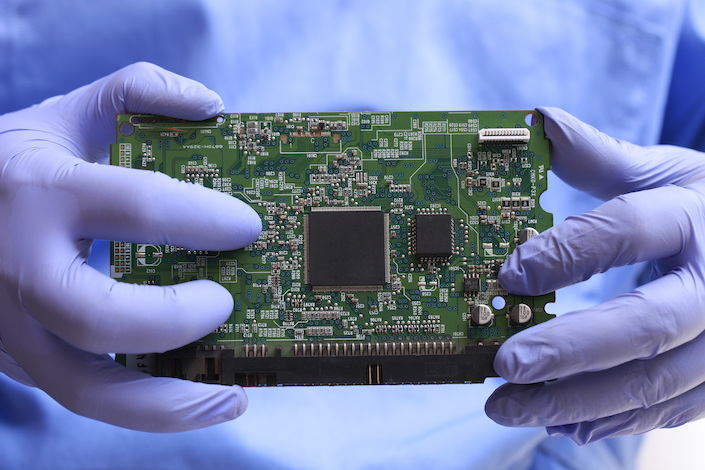 Chinese venture capital is pouring into development of the next generation of microprocessors as Chinese startups race to challenge the dominance of the U.S. chipmaking giant Nvidia Corp.

Several Chinese frontrunners have jumped into the race, attracting investors’ attention. Beijing has been pushing for more self-reliance in semiconductors, and a global chip shortage has created an opportunity for Chinese companies to make breakthroughs. Aiming to leapfrog to the next generation of integrated circuit technology, the crowded field of Chinese startups has been recruiting veterans of Nvidia itself and other leading semiconductor companies.

One is artificial intelligence chipmaker Iluvatar CoreX, founded in 2015. In March, it unveiled China’s first GPGPU built using advanced 7 nanometer (nm) technology — an indication of how many transistors can be packed into a computing chip.

Another is Shanghai-based Biren Technology, with a valuation of more than 10 billion yuan ($1.5 billion). It managed to raise 4.7 billion yuan from more than 40 investors since its founding in 2019. Investors included Hillhouse Group, Walden International China and BAI Capital.

Although the upstarts have generated plenty of enthusiasm while raising significant funds, investors and leaders of the companies acknowledge that taking on the likes of Nvidia is no easy challenge. No more than one or two of the companies will survive because it will take billions of dollars to build up a software ecosystem comparable to Nvidia’s, according to one chip industry investor.

“First, we should develop a product and start product iteration,” said Diao Shijing, chairman and CEO of Iluvatar CoreX. “I don't think anyone will surprise the world or disrupt the industry with its very first product, and it definitely will need constant refinement."

At the same time, the Chinese startups stand on the edge of a tremendous opportunity, said Wang Endong, executive president and chief scientist of cloud computing and big data provider Inspur. He predicted that demand for AI computing chips to power deep machine learning will grow exponentially.

In 2020, computing by AI accelerator chips — special integrated circuits designed for artificial intelligence applications such as GPGPUs — surpassed computing by the conventional central processing units, or CPUs, that have powered computers for decades, Wang said.

“AI accelerator chips will account for more than 80% of overall computing power by 2025,” Wang said.

Nvidia captured the lead in AI technology over the past decade, making GPUs a standard for artificial intelligence processing. The company’s share price rose more than 25-fold in the past five years, giving it a market value of more than $450 billion, second behind Taiwan Semiconductor Manufacturing Co.

“We have invested tens of billions of dollars in GPUs over the past 30 years, and only in this one area,” Nvidia founder Jensen Huang said in a June 2 video interview with Caixin at the company’s U.S. headquarters. "I can certainly understand why it will spawn so many competitors in light of such a huge market.”

In 2020, China's semiconductor industry attracted venture capital investment of more than 140 billion yuan, surpassing the internet as the most attractive sector, according to data from the U.S. corporate law firm Katten Muchin Rosenman, which has departments focusing on intellectual property and technology. In the first five months of 2021, about 164 Chinese semiconductor companies received investments, with total financing of more than 40 billion yuan, close to the level of the full year 2019, according to Katten Muchin.

The new wave of Chinese chip startups is led by Shanghai-based Biren. Founder Michael Zhang is the former president of the AI startup Sense Time and a former U.S. lawyer. Zhang recruited his core management from industry veterans in the U.S., including Chief Technical Officer and Chief Architect Mike Hong. Hong helped build Huawei’s GPU research and development team in the U.S. in 2016 and also worked for Nvidia.

Biren started operation in November 2019 with a plan to introduce its first product, a 7 nm GPGPU, in 2022, according to co-founder Xu Lingjie, who previously worked for Nvidia, Samsung and Alibaba.

“The demand for AI computing from major internet companies is still growing at more than 40% a year,” Xu said. “Even if only one-third of the servers are replaced every year, procurement from companies and government will still be huge.”

Like Biren, Shanghai-based MetaX and Iluvatar CoreX also started in the GPGPU arena with founding teams that previously worked for AMD. Headquartered in Beijing, Moore Threads, founded in October 2020, jumpstarted with GPUs. CEO Jams Zhang is the former China general manager of Nvidia.

Battle for the future

The GPGPU market is still nascent, and it will take time for the Chinese startups to meet the standards of major customers such as Alibaba and Tencent, according to Liu Hongchun, founding partner of Winreal Investment, a venture capital firm.

Other challenges facing the upstart chipmakers include intellectual property and relationships with China’s tech giants, such as Huawei, Alibaba and Baidu, which all have their own chipmaking businesses. It’s hard to tell whether these tech giants will regard the startups as friends or foes, an industry expert said.

In the longer run, analysts said the chipmaking startups need to establish a software ecology in China that can rival Nvidia's. The American company released its parallel computing platform CUDA in 2006, including a development toolkit that enabled anyone with a laptop equipped with an Nvidia GPU to develop software. Over the past decade or so, Nvidia has promoted CUDA in schools and research institutes, enabling software such as climate simulation and seismic data processing to be developed based on the platform.

Currently, Chinese GPU makers are adopting a CUDA-compatible strategy and aim to build their own software ecosystem on top of it. However, once users are accustomed to CUDA, they will be unlikely to migrate to other platforms, said a mid-level manager at AI startup Enflame Technology Co. Enflame makes chips designed to process huge amounts of data to train artificial intelligence systems.

“No ecosystem is built in one day,” said Jeffrey Wang, managing director at Lenovo Capital, an accelerator and venture capital unit of Lenovo Group. “It will take time.”

While the Chinese companies are cutting their teeth in the GPU sector, Nvidia is eyeing the CPU and Data Processing Unit (DPU) field. The company is pursuing a $40 billion bid for U.K.-based Arm Holdings from Japan’s Softbank. The deal, which would be one of the biggest semiconductor takeovers ever, is pending approval from regulators in the U.K, the U.S. and China.

While Nvidia is busy with the CPU and DPU market, it may become a great opportunity for Chinese GPU companies to play catch-up, industry experts told Caixin.

Bonnie Cao contributed to this story.