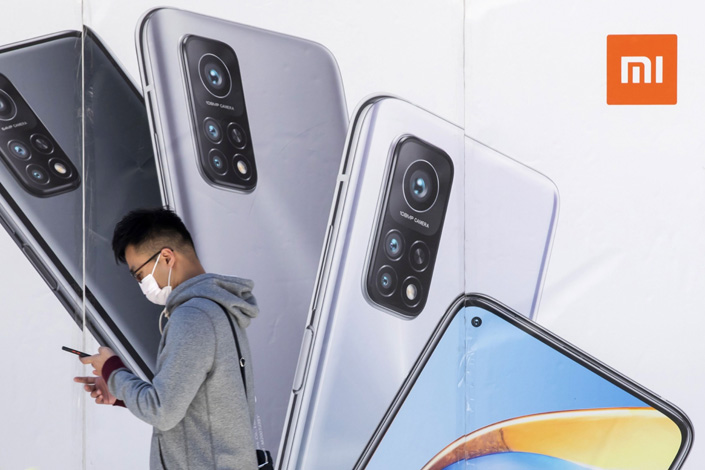 A pedestrian walks past advertisements at a Xiaomi Corp. store in Hong Kong. Photo: Bloomberg

It announced the Mix 4 handset on Tuesday, which features the latest Qualcomm Inc. processors, a bezel-less screen with a curved edge, and a front-facing camera hidden underneath the display rather than requiring a cut-out, or “notch.” It’ll sell in mainland China for as much as 6,299 yuan ($972).

“It’s just a beginning of Xiaomi’s pursuit in the high-end market,” CEO Lei Jun said during a livestreamed event.

Xiaomi gained fame as a vendor of low-end Chinese phones but has been trying to overhaul its image with sleek designs and more sophisticated gadgets. It overtook Apple as the world’s second-biggest smartphone maker in the second quarter after increasing shipments by 83%, Canalys said in July.

Lei used almost three hours to reflect on the milestones of Xiaomi while introducing new tablet computers, televisions and smart speakers. But the billionaire fell short of disclosing any information about his automobile project.

In March, Lei announced he’ll lead a standalone division to build electric cars. Calling it the “last startup project” of his career, he pledged an initial 10 billion yuan toward smart vehicle manufacturing and plans to hire 500 engineers to develop self-driving technology.

Still, the company faces intense competition from Apple’s iPhone and Samsung’s Galaxy range in Europe and Asia. Both manufacturers have diversified their smartphone lines to cater for budget-conscious and money-no-object consumers alike, with Apple expected to further increase its focus on professional video in its next release.

Xiaomi started to sell its first smartphones running on a tailored Android operating system 10 years ago. The Beijing-based company quickly grew to become the biggest phone maker in China using mostly e-commerce channels. Under Lei’s stewardship, it opened brick-and-mortar stores across China and expanded into countries from India to Russia and Germany. Its IPO in 2018 was one of the biggest that year.