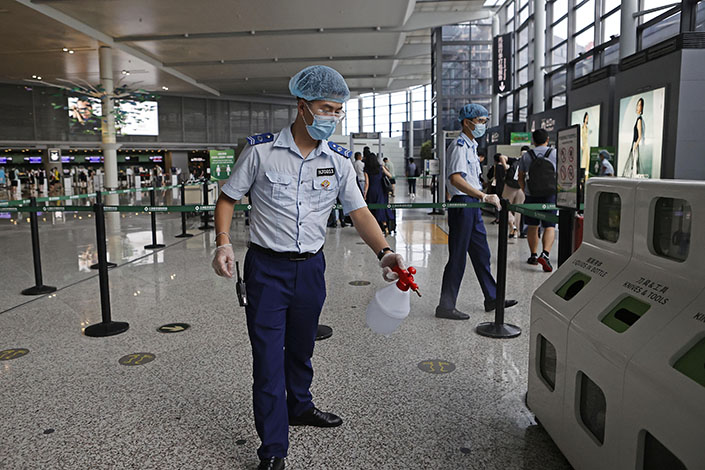 Airports around China are lengthening the amount of time some international aircrews and ground staff must spend in quarantine, after containment breaches sparked community spread of the highly infectious delta variant in several regions.

Some regional regimes will see airport workers judged to be a higher risk isolated for up to 28 days after two weeks of work. These represent far tougher restrictions than those currently mandated by the country’s national aviation authority.

On Monday, an official from the Hubei branch of China’s civil aviation authority said airline personnel working international routes that touch down in the province would be assessed under a new four-tier risk assessment system based on their role.

Flight and ground crew in the riskiest posts will work on a “14+14+14” schedule, where two weeks of work will be followed by two weeks of quarantine in a central facility and two further weeks of home quarantine, said Huang Zaojie, deputy director of Hubei branch of the Civil Aviation Administration of China (CAAC).

The new regime also includes nucleic acid testing every other day for workers in high-risk posts.

Also on Monday, Shanghai’s two major airports upgraded their restrictions on ground staff, implementing a “14+7+7” system for all passenger and cargo personnel in which they will work for 14 days before undergoing 7 days of centralized quarantine and then 7 days of rest.

A cargo industry insider told Caixin that freight companies are now struggling to find workers as a result of the change, leading to widespread disruption in logistics.

The toughened-up rules come after overworked airport personnel have emerged as a weak link in local and global efforts to contain the spread of the delta variant, which experts say can be twice as contagious as previous strains.

Nanjing, capital of East China’s Jiangsu province, was the site of a significant delta outbreak in June when workers at Lukou International Airport and their families tested positive in an outbreak traced to a passenger flight from Russia. The outbreak prompted the mass testing of millions of people and was linked to subsequent clusters in Hunan and Sichuan provinces.

The Central Commission for Discipline Inspection, the Communist Party’s top anti-corruption watchdog, said after an investigation that Lukou airport had lacked supervision, was poorly managed and failed to implement required epidemic prevention and control measures. A parallel investigation by the CAAC came to similar conclusions.

The airport’s failure to control infections among frontline staff caused the outbreak to spread to other cities and provinces, the CAAC investigation found.

Two senior officials at state-owned Eastern Airport Group Co. Ltd., which manages the airport, were placed under investigation by the graft-buster.

Also in June, a customs officer and a restaurant attendant at Shenzhen Bao’an International Airport were infected, triggering an outbreak in Shenzhen and neighboring Dongguan.

The CAAC has signaled it also plans to make changes to its rules.

At the Monday conference in Hubei, an official said the eighth edition of CAAC’s Technical Guidelines for Epidemic Prevention and Control for Airlines will be published shortly with two major changes: detailed quarantine plans for various front-line staff, and a higher frequency of nucleic acid testing.

The current edition, published in February, introduced different quarantine measures for international flight crew based on whether they had stayed overnight in a hotel overseas or not.

For passenger airlines, flight attendants who have stayed overnight are required to enter central quarantine and take a Covid test on the third and seventh day, and can resume work if both tests are negative. If the country they visited is classed as high-risk, they then have to undergo daily health monitoring for another 7 days.

Flight crew who have travelled overseas but returned without spending the night face less strict quarantine processes. Workers who test negative can choose whether or not they want to quarantine. If they do choose to quarantine, they can do so at home and can still go to their workplace — but no other locations.

The technical guidelines don’t include a detailed list of high-risk countries, but do offer some principles under which a country could be designated as such. These include the current number of Covid-19 cases per 1 million people and the flight duration.

Airlines are also adjusting their operations. China Eastern Airlines and Hainan Airlines have either suspended or simplified some in-flight services, such as serving food and passenger supplies.