Analysis: Will the Taliban Make a Clean Break With Terrorists? 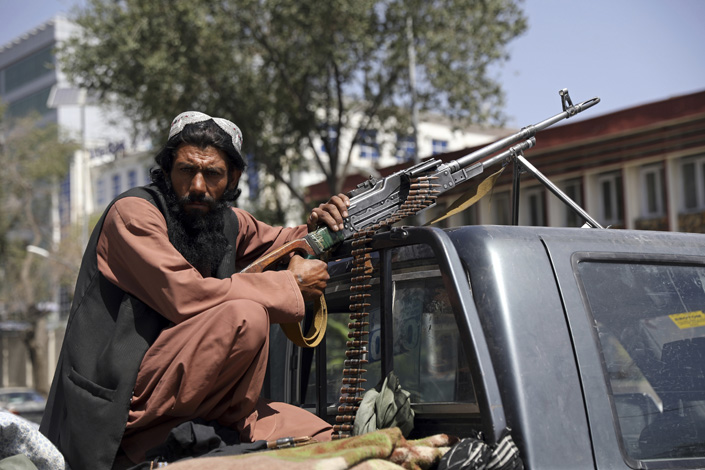 A Taliban fighter patrols near the Afghan presidential palace, in Kabul, Afghanistan, on Monday. Photo: VCG

On Aug. 16, Chinese Foreign Minister Wang Yi held a phone conversation with Russian Foreign Minister Sergey Lavrov, in which he presented China’s views on dramatic changes that have taken place in Afghanistan.

“As the Taliban is declaring victory after the former regime collapsed without putting up a fight, it is commonly believed in the international community that this outcome was both logical and inevitable, signifying that military intervention and power politics are unpopular and doomed to fail,” Wang said during the phone call.

In a separate phone conversation with U.S. Secretary of State Antony Blinken the same day, Wang Yi spoke more frankly, saying that “Facts have once again proved that it is difficult to gain a foothold in a country with a completely different history, culture and national conditions by mechanically copying foreign models.”

He emphasized that “Using power and military means to solve problems will only cause more problems.” Coincidentally, Wang’s view was similar with U.S. President Joe Biden’s message in his first speech after the Taliban takeover of Kabul.

Speaking about Afghan President Ashraf Ghani, who fled the country when its capital was besieged, Biden — the fourth U.S. president since the country invaded Afghanistan — said, “The events we’re seeing now are sadly proof that no amount of military force could ever have delivered a stable, united, and secure Afghanistan.”

A basic principle of China’s diplomacy is non-interference in the domestic affairs of other countries, letting them set their own targets and make their own choices of how to get there. By virtue of this attitude and position, China has given itself space to negotiate in the face of these sudden changes in Afghanistan’s political situation and can continue to protect itself and safeguard its interests in the country.

In the past few months, the Chinese Embassy in the Islamic Republic of Afghanistan had repeatedly urged Chinese people in Afghanistan to leave the country as soon as possible to ensure their personal safety.

Although the Afghan Taliban has taken control of Kabul, the Chinese ambassador and staff at the embassy, which reopened in 2002, are still in the country and the embassy is still operating normally. The embassy remains in close contact with the small number of Chinese citizens who have voluntarily chosen to stay in Afghanistan, so as to ensure their safety.

China has always adhered to a policy of showing respect for Afghanistan’s national sovereignty and keeping in touch and communicating with all parties of Afghanistan, including the Afghan Taliban, over the past 20 years. On this basis, China can express its concern for its own interests and rights and consider more extensively problems facing all parties in Afghanistan, including the power transition mechanism and the future government. This helps these parties take China’s suggestions seriously.

At the emergency meeting on Afghanistan held by the UN Security Council on Aug. 16, Geng Shuang, China’s deputy permanent representative to the UN, explain China’s basic principle toward Afghanistan: “Afghanistan must never again become a haven for terrorists. This is the bottom line that Afghanistan must stick to, whatever their future political solution may be [...] the top priority is to restore peace, stability and order as soon as possible, so as to minimize unnecessary casualties and large streams of refugees.”

Regarding the evacuation work still being organized by Western countries, China has also echoed the demands of the international community and warned all Afghan parties that “(t)he rights and interests of diplomatic agencies and personnel stationed in Afghanistan are inviolable. The safety and interests of foreign citizens in Afghanistan must be respected and guaranteed. All Afghan parties have the responsibility to protect the lives and property of the people, and to provide a guarantee for the safe residence and orderly evacuation of foreign nationals.”

China is serious about every word. “To minimize unnecessary casualties” emphasizes that the Taliban should be tolerant and humane towards the defeated enemy — especially Afghan government forces, civil servants of the former regime, and even the local people of Afghanistan who have worked for foreign embassies or other organizations.

The calls to respect the safety and interests of foreign citizens in Afghanistan and provide a guarantee for the safe residence and orderly evacuation of foreign nationals does not only concern China’s own interests but also determines the diplomatic environment and international public opinion that China will face when considering developing contacts with the new Afghan administration in the future.

Now, whether those words are taken seriously by the Afghan Taliban will largely determine China’s next step towards the new Afghan administration.

With the collapse of Afghanistan’s political system — operated with the support of external forces since 2004 — due to the defeat of the war, the organization of Afghanistan’s new power structure has just gotten underway.

Former Afghan president Hamid Karzai, the rival of Afghan President Ashraf Ghani — Abdullah Abdullah (chairman of the Afghan High Council for National Reconciliation) and Hekmatyar (leader of Hezb-e-Islami Gulbuddin and former Afghan prime minister) will form a transitional committee to discuss the establishment of a new political structure with the Taliban, which now controls Afghanistan’s capital, all land border crossings and most provincial capitals.

China still expects to see the establishment of an open and inclusive political structure and the adoption of moderate and steady religious policies in Afghanistan, which may help achieve a “soft landing.”

Another issue of particular concern is that “China hopes that the Afghan Taliban will make a clean break with all terrorist organizations including the East Turkestan Islamic Movement (ETIM).” This was repeatedly stressed in Wang Yi’s meeting with Abdul Ghani Baradar, head of the Afghan Taliban Political Commission, in late July this year.

Since the Taliban achieved overwhelming superiority on the battlefield, China has insisted that the new Afghan regime should draw a clear line, to restrain and crack down on all kinds of international terrorist forces, including the ETIM, to prevent Afghanistan from once again turning into a gathering place for terrorist extremist forces, and thus “not allowing Afghanistan to once again become a breeding ground and sanctuary for terrorism.”

The last time the Taliban was in control of vast parts of Afghanistan, 1996 to 2001, a small number of extremist organizations that endangered China’s sovereignty, security, and national unity traveled across borders, using Afghan territory to carry out training and set up camps, haunting the Afghanistan-Pakistan border, colluding with various international terrorist organizations, and endangering regional security and stability. This is something that China will have to be very careful about in the future.

Given that there are different factions within the Afghan Taliban organization, and that each command network has varying degrees of influence in different regions, how can the Taliban guarantee full implementation of diplomatic assurances?

As for the fact that senior Taliban officials cannot fully restrain the youth faction appearing on the frontline, is it possible for Afghanistan to destroy and clean up the den of international terrorism? In this regard, China is awaiting the Taliban’s actions before making its judgment.

Therefore, at a July 28 meeting with Baradar in Tianjin, Wang Yi stressed that China hopes the Afghan Taliban will make a clean break with all terrorist organizations including the ETIM and resolutely and effectively combat them to remove obstacles, play a positive role and create enabling conditions for security, stability, development and cooperation in the region.

As China and Afghanistan share a 90-kilometer border, China will always follow changes happening in its neighboring country.

China has an appeal and a bottom line when it comes to common security concerns regarding Afghanistan, China and other countries in the region. Whether this appeal is valued or China’s bottom line is broken will have a direct impact on China’s impression and judgment on the new rulers of Afghanistan.

At present, the period of observation and inspection has just begun.

In the face of a deep pool of multilateral interests and complex historical and geographical conditions, it is necessary for China to stay sober-minded. Over the past 20 years, other forces have seized the opportunity, taken power, implemented tough policies and fostered corruption. In the end, it is clear that these were many faulty choices and many lessons to learn from this. Meanwhile, someone’s failure is not always someone else’s success.