By Ding Yi, He Shujing and Pu Juan 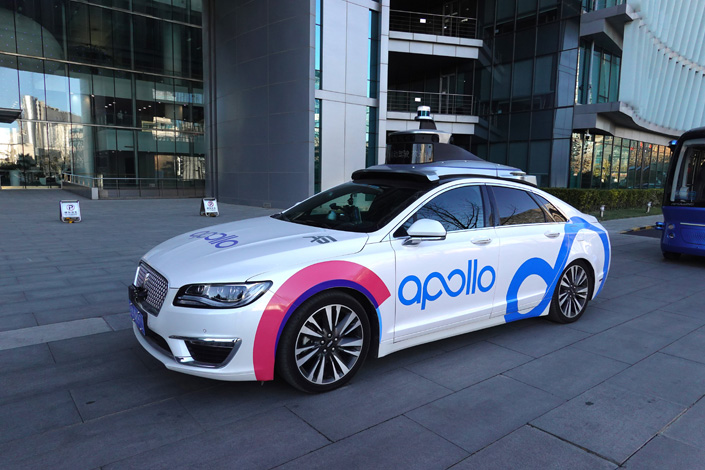 Baidu Inc. has rebranded its two-year-old driverless taxi service platform in a move it said could inject impetus into its efforts to truly commercialize its self-driving technology, amid growing concerns over the safety of autonomous vehicles.

At the annual Baidu World conference on Wednesday, the Beijing-based tech giant announced the launch of Luobo Kuaipao, an updated version of its Apollo Go robotaxi service app that allows users to hail autonomous cabs equipped with a safety driver in limited areas of Beijing, Guangzhou, Changsha and Cangzhou.

Baidu CEO Robin Li has pinned high hopes on Luobo Kuaipao, which he believes can raise public awareness about self-driving technology and help reduce the company’s dependence on online advertising, which is still its primary revenue stream.

“When you see a car printed with the logo of Luobo Kuaipao on the streets in the future, you will immediately understand it is an autonomous vehicle that ordinary people can hail via an app,” Li said at the Wednesday conference. He added that Baidu aims to expand the Luobo Kuaipao service to some 30 Chinese cities in the next three years.

Caixin found that the Luobo Kuaipao app is already available to download on some Android app stores. A company representative told Caixin that the app will serve as a smart mobility service platform designed for mass availability with and will dispatch vehicles more efficiently, compared with its predecessor Apollo Go that was more like an experimental product.

Li has previously said that his company aims to earn more money from its self-driving technology by selling its automated driving systems to third-party automakers, bringing its intelligent vehicles to the market and offering commercial robotaxi and robobus services to the general public.

In January, Baidu, which operates China’s biggest search engine, announced its decision to create a smart electric-vehicle joint venture with domestic automaker Zhejiang Geely Holding Group, saying it would provide intelligent driving technology while Geely will oversee the manufacturing of the actual cars.

In May, the company started trialing a paid robotaxi service in Beijing’s Shougang Industry Park, charging passengers a flat fee of 30 yuan ($4.6) for each ride monitored by a 5G-connected remote control system.

As of the end of June, it has provided a total of 47,000 autonomous rides ordered via the Apollo Go app which was launched in 2019, with its vehicles powered by Level 4 self-driving technology logging over 7.5 million miles in test drives, the company said.

Baidu is among the leaders of China’s autonomous driving sector, though by no means the only player. Its rivals, including Guangzhou-based startup WeRide, ride-hailing giant Didi Chuxing, Toyota-backed Pony.ai and Alibaba-backed AutoX, have all started trialing their own robotaxi services in the country.

However, autonomous driving technology is still far from mature. Last week, a highway crash that killed a young entrepreneur who had been driving a Nio Inc. car with its advanced driver assistance system activated once again raised public concerns over safety. The incident prompted a rival electric car company CEO to call for the unified use of Chinese translation for the different levels of autonomous driving.

U.S. engineering standards group SAE International classifies autonomous driving from Level 0 to Level 5, with Level 1 and Level 2 considered driver assistance technology that requires a human to be in control of the vehicle the whole time. Level 4 and Level 5 are deemed advanced automated driving technology that allows a car to drive itself almost independently of human intervention in some or all conditions. Level 3 refers to features that enable a car to drive itself only under certain circumstances and requires the driver to be ready to take control in the event of an emergency.