By Jia Tianqiong and Kelsey Cheng 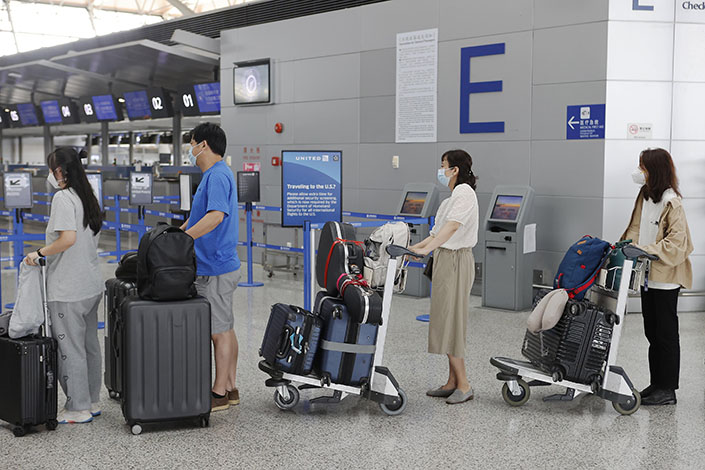 International students and their parents line up to board at Shanghai Pudong Airport on Thursday. Photo: China News Service/Yin Liqin/VCG

U.S. aviation authorities have forced four Chinese carriers that fly to the country to slash their passenger capacity by 60%, after Beijing imposed a similar restriction on four United Airlines routes to China.

The order from the U.S. Department of Transportation (DOT) dated Wednesday said the limit will apply to Air China, China Eastern Airlines, China Southern Airlines, and Xiamen Airlines over a four-week period.

None of the airlines has yet responded to the move.

The DOT order comes as Chinese students are heading to American campuses for fall classes following a year of Covid-related travel restrictions.

On Aug. 6, the Civil Aviation Administration of China imposed restrictions on United Airlines after five passengers who traveled from San Francisco to Shanghai tested positive for Covid-19 on July 21.

Operating four flights with a maximum 40% capacity was one of three options Chinese authorities gave United. The others were: cancel two San Francisco to Shanghai flights, or operate two flights without passengers.

United chose the capacity cut, and the limit was imposed on four Wednesday United San Francisco-Shanghai flights, beginning with one on Aug. 11.

The order said the US government has repeatedly complained about China’s “circuit breaker” policy, which it says “places undue culpability on carriers with respect to travelers that test positive for Covid-19 after their arrival in China.”

“As carriers are following all relevant Chinese regulations with respect to pre-departure and in-flight protocols, they should not be penalized as a result of travelers later testing positive,” the order said.