By Kelsey Cheng and Sun Yanran 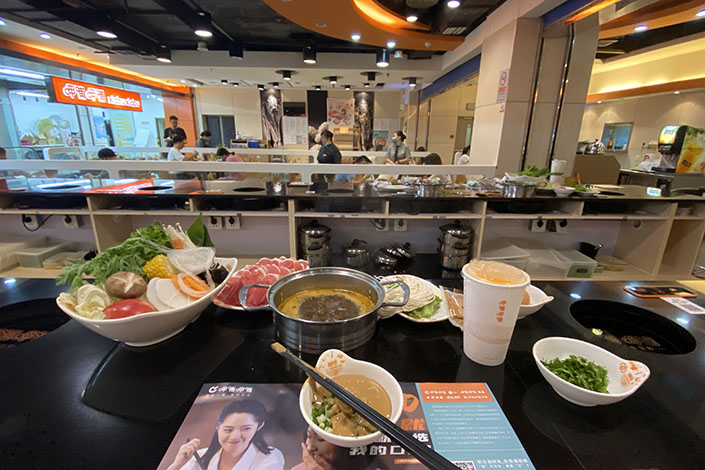 Hotpot chain operator Xiabuxiabu Catering Management China Holdings Co. Ltd. reported a 58.5% revenue gain to 3 billion yuan ($463 million) in the first half of 2021 as it stays on track to close about 200 loss-making restaurant outlets by end of year.

The Hong Kong-listed firm, which runs 1,077 restaurants under its flagship Xiabu Xiabu hotpot brand and higher-end Coucou label, cut its losses by 81% to 46.9 million yuan compared with a shortfall of 252 million yuan in the first half of 2020 when the Covid-19 outbreak forced it to close operations.

In the six months through June 30, the company shuttered 24 Xiabu Xiabu outlets “due to commercial reasons” while opening 40 new Xiabu Xiabu and nine Coucou restaurants, according to its earnings report released late Monday.

The 23-year-old company’s seat turnover rate — a key gauge of restaurant profitability — has been shrinking over the past five years, falling from 3.4 times a day in 2016 to 2.3 times a day in 2020, the report said.

Moving forward, the company said it will accelerate the opening of Coucou-branded stores in first-tier and overseas markets while adjusting the Xiabu Xiabu model, including slowing down the opening of new stores, re-planning menus and launching new products.

The company is also strengthening its new delivery business, Xiabu Delivery, which notched a first-half revenue of 186 million yuan.

Xiabu Xiabu’s costs have been rising due to heavy asset investment, plus spending on operations management and its supply chain, so the new strategy for its loss-making outlets makes sense, Chinese food industry analyst Zhu Danpeng told Caixin.

Zhu questioned, however, if the company would be able to make up for the losses from the eventual closure of 200 stores. Xiabu Xiabu’s brand tone, supply chain, production and service don’t match the core needs of consumers in today’s rapidly developing catering industry, he said.

During the reporting period, the company dismissed its chief executive Zhao Yi in May, citing the underperformance of certain sub-brands, and appointed founder Ho Kuang-Chi to the position. Zhao was also removed as an executive director in June due to her “substantially different” management style and mindset compared with the rest of the board.

Meanwhile, Xiabu Xiabu’s bigger rival, Haidilao International Holding Ltd., posted a turnaround profit of 96.5 million yuan for the first half, recovering from a loss of 965 million yuan in the same period last year during the pandemic.

The Hong Kong-listed hotpot restaurant chain’s revenue was up 105% from a low base to 20 billion yuan, according to its earnings report released last Tuesday. The increase in revenue was attributed to eased pandemic prevention and control measures, increased customer flows and new branch openings, the company said.

Overall table turnover rate dropped to 3 times per day from 3.3 times year-on-year, with the report saying operating performance was “not up to management’s expectations.”

The 27-year-old company, which operated 1,597 restaurants in the Chinese mainland, Hong Kong and overseas as of June 30, said it will keep improving services and steadily expand its restaurant network, as well as continue to develop technologies and new investment opportunities.

Revenue from its delivery business fell 15.6% to 345.7 million yuan due to a decrease in the number of delivery orders as the pandemic situation improved, the company said.

“Xiabu Xiabu is maintaining its average spending per customer at about 60 yuan in tier 3 cities, while Haidilao opened most of its stores in cities that are third-tier or below, adding 344 stores to take it to a total of 611, surpassing 593 stores in second-tier cities,” Dudarenok told Caixin. Comparatively, the operator only added 75 new restaurants in first-tier cities.

She also pointed out that although each operator has its own advantage — Xiabu Xiabu winning over customers who prefer self-service mini hotpots while Haidilao is known for its high functioning, integrated supply chain and customer service — both will continue to face challenges, including pressures from rising costs, external competition and food safety in the second half of the year.