By Xiang Kai and Wang Xintong 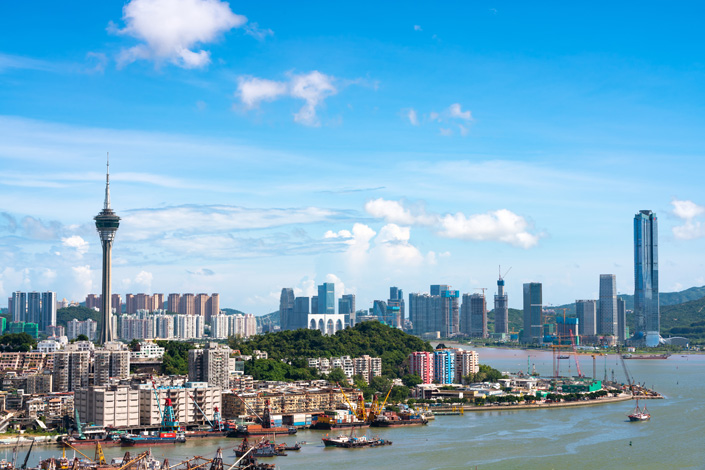 A photo captures part of the Macao skyline with Hengqin in the background on Aug. 23. Photo: VCG

The general plan (link in Chinese) to build a Guangdong-Macao in-depth cooperation zone, which the Communist Party of China (CPC) and the State Council issued Sunday, aims to provide a new home for Macao residents to live and work, and enrich the practice of “one country, two systems,” said the state-run Xinhua News Agency.

The plan comes months after the National Development and Reform Commission decided to set up a special fund for projects in cooperation zones in the Guangdong-Hong Kong-Macao Greater Bay Area, including Hengqin’s in-depth cooperation zone, whose construction was first proposed (link in Chinese) by the CPC and the State Council in 2019.

Macao will play a leading role in the economic operation of the cooperation zone, while Guangdong will take on government responsibilities such as social management, said Mi Jian, a professor at the Zhuhai branch of Beijing Normal University.

According to the plan, a special committee consisting of officials from both Guangdong and Macao will be established to develop and manage the zone. The governor of Guangdong and the chief executive of Macao will serve as the committee’s two directors.

Authorities in Guangdong and Macao will jointly determine most of the deputy directors of the committee, tasked with making decisions on major plans, policies, projects, and the appointment and removal of important personnel, the plan said. The committee will be headed by the leading group for developing the Greater Bay Area.

In addition, an executive body, under the leadership of the committee, will be set up to carry out duties such as international promotion, investment attraction, land development, project construction and livelihood management, the plan said, noting that the main person in charge of the body will be appointed by Macao.

The decision to share officials from Guangdong and Macao and make them develop an area together will help fully gather advantages of both sides and mobilize their enthusiasm to participate, Yuan Chiping, a professor at the Institute of Guangdong, Hong Kong and Macao Development Studies of Sun Yat-sen University, told Caixin.

The plan requires the two regions to explore and establish a revenue sharing mechanism under which all investment income before 2024 should be given to the special committee for the development of the cooperation zone.

It focuses on the development of certain industries in the cooperation zone, including sci-tech research and high-end manufacturing, traditional Chinese medicine, culture and tourism, as well as modern finance. Qualified enterprises will enjoy a corporate income tax rate of 15%, much lower than the average 25% on the Chinese mainland.

The plan said Hengqin is formulating supportive policies to lure international high-level talent, which will benefit qualified people to get in and out the cooperation zone, provide them better services, as well as exempt them from paying the portion of personal income tax that exceeds 15% of their taxable income.

In recent years, Hengqin, with about 53,000 residents, has rolled out several supportive policies to allow businesses from Macao to operate there or across the border. According to local market regulators, the island had registered more than 4,300 Macao-funded companies by the end of June, an increase of 20.5% from the end of 2020, with registered capital reaching 135.7 billion yuan ($21 billion).

Hengqin, located in the southern part of Zhuhai and connected to Macao via a bridge, was designated by the State Council, China’s cabinet, as a new area to implement “one country, two systems” in 2009, with an initial investment for local projects of more than 72.6 billion yuan. It became the third national new area following Tianjin Binhai New Area and Shanghai Pudong New Area.