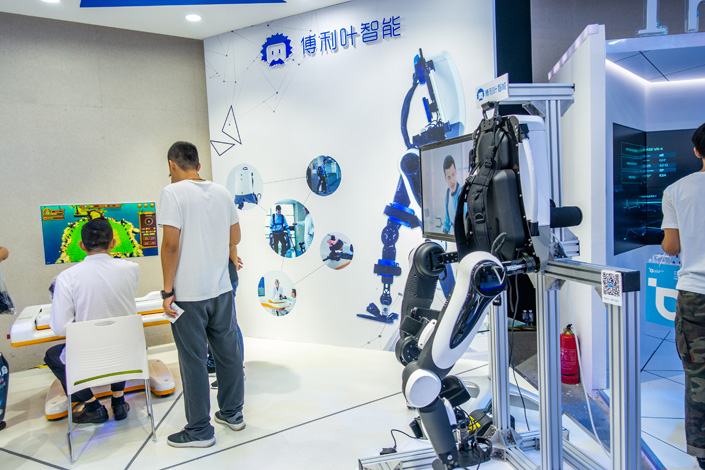 Workers demonstrate how to operate a Fourier exoskeleton robot at the 2018 World Artificial Intelligence Conference in Shanghai in September 2018. Photo: VCG

(Nikkei Asia) — A Chinese developer of robots used in physical therapy has won the backing of the Saudi Aramco group in a vote of confidence for its growth prospects from one of the world’s largest companies.

Fourier Intelligence received tens of millions of dollars from Prosperity7 Ventures, an Aramco Ventures fund, during a July funding round.

The Chinese company looks to deepen its ties to Saudi Arabia, opening the door to opportunities such as a joint rehab center there as part of its international expansion.

Its products have been introduced at more than 1,000 medical institutions and nursing homes across China, according to the company. It also exports to around 30 markets, including European countries, the U.S. and Australia.

China’s physical rehabilitation market is forecast to soar to serve an aging population. KPMG projects more than sixfold growth over a decade to 220.7 billion yuan ($34.2 billion) in 2025. This growth is expected to increase the burden on the field’s limited number of specialists, creating an opening for robots like Fourier’s.

These robots carry price tags running into the hundreds of thousands of yuan, and “almost all of our customers now are businesses such as medical institutions,” CEO Alex Gu said. “But in the future, we want to lower the price and enable individuals to buy them.”