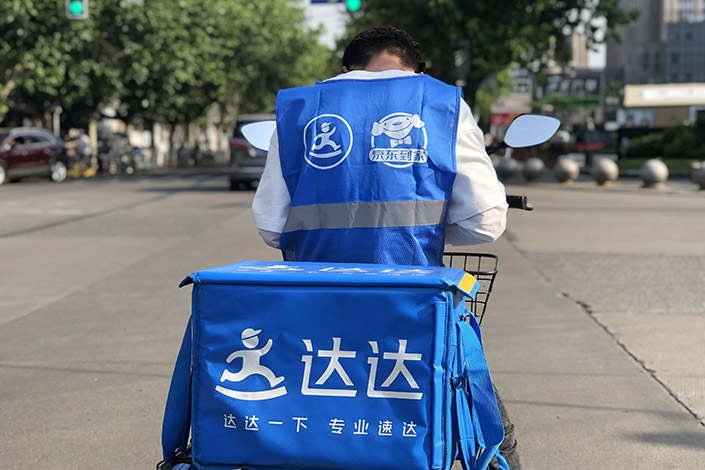 A Dada delivery driver in Shanghai in May 2020. Photo: VCG

JD.com-backed delivery platform Dada Group reported widening losses in the second quarter, despite a jump in revenue and a forecast for more of the same this quarter, as the company doubles down on its autonomous delivery service to enhance efficiency and reduce costs.

In the three months through June, the Shanghai-based company’s net loss attributable to ordinary shareholders swelled to 640.4 million yuan ($99.1 million) from 617 million yuan a year ago, even as total revenue grew 11.5% year-on-year to 1.5 billion yuan, according to its earnings report published Tuesday. The report also showed that its number of active consumers hit 51.3 million by the end of June, up 59% year-on-year.

Nearly 60% of its quarterly total revenue came from JDDJ, an online on-demand retail platform Dada acquired from JD.com in 2016, generating revenue of 881.1 million yuan, up 81% year-on-year. The remainder came from Dada Now, an intracity courier service, which logged a year-on-year revenue drop of about 30% to 593.5 million yuan.

“We continue to see enormous growth potential for local on-demand retail services,” Dada Group CEO Philip Kuai said during an earnings conference call on Tuesday, citing government data showing that offline retail still accounted for 76.3% of consumer goods sold in the first half of this year. “We believe accelerating digital transformation will continue to be the strategic focus of physical retailers.”

The spike in the company’s quarterly total revenue was partly offset by its increased spending on operations, marketing and research and development expense categories that grew 3.3%, 113% and 2.9% year-on-year, respectively, to 1.1 billion yuan, 824.2 million yuan and 132.3 million yuan. But administrative expenses dropped to 100.1 million yuan from 164.9 million yuan a year ago.

In July, Dada Now officially launched a platform for its autonomous delivery service, following in the footsteps of rival Meituan, which is already testing a drone-enabled logistics network in Shanghai.

“In the short term, autonomous delivery will be utilized to supplement manual delivery, and help to ease the capacity constraints, especially during peak hours and periods of extreme weather conditions,” said Kuai, adding that the long-term goal of using unmanned vehicles is to significantly reduce the cost of delivery.

Dada Group, which is one of the primary partners of JD Logistics, forecast that its third-quarter revenue will continue to grow, reaching between 1.63 billion yuan and 1.68 billion yuan, according to the report.