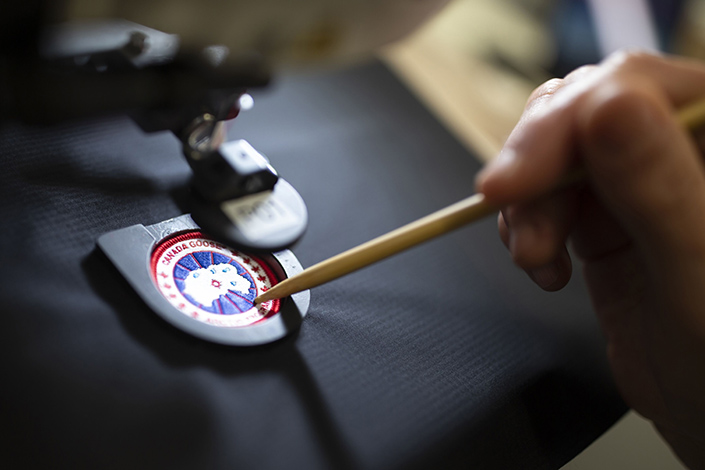 An employee arranges a logo patch in a sewing machine at the new Canada Goose Inc. manufacturing facility in Montreal, Quebec, Canada, in April 2019. Photo: Bloomberg

(Bloomberg) — High-end parka maker Canada Goose Holdings Inc. was fined by China and criticized by its state media for allegedly misleading consumers in some advertisements, becoming the latest foreign brand to be targeted by regulators amid political tensions between Beijing and the west.

Shanghai’s market regulator fined the retailer’s local unit 450,000 yuan ($71,000) in June, according to the National Enterprise Credit Information Publicity System, an official corporate information website. The regulator said Canada Goose’s claims of using “the warmest material from Hutterite,” referring to communities that produce some of the world’s most luxurious goose down, deceived shoppers as most of its products are actually made with other material.

A Wednesday commentary in the Economic Daily newspaper, which is affiliated with China’s powerful State Council, cited the accusations about the ads as evidence that Canada Goose hadn’t obeyed Chinese advertisement laws.

The Toronto-based company’s Shanghai unit didn’t immediately respond to a request for comment.

While the Chinese market has become a growth driver for global brands, political tensions with western countries over everything from trade to the virus and human rights are fueling nationalism among mainland shoppers.

Relations between Ottawa and Beijing are especially fraught over the holding in Canada of Huawei Technologies Co. Ltd. executive Meng Wanzhou, who was detained in December 2018 — days before Canadians Michael Kovrig and Michael Spavor were taken into custody by China and later accused of spying. Spavor was last month sentenced to 11 years in prison.

A threatened boycott after Meng’s detention in 2018 caused Canada Goose to delay the opening of its flagship store in Beijing.

Canada Goose joins other foreign retailers who have been caught in China’s crosshairs amid tensions with their home countries. A Shanghai unit of Hennes & Mauritz AB was in August similarly fined 260,000 yuan for “deceiving and misleading consumers” in its ads, and was alleged to be selling inferior products and failing to disclose some required product information on packages.

The Swedish apparel was boycotted earlier this year by Chinese consumers for its statement expressing concern about reports of forced labor in China’s Xinjiang province. Online sales of Adidas AG and Nike Inc. also plunged in China after shoppers turned their backs on international brands that have taken a stand against the treatment of Muslim Uyghurs there.