Opinion: How Less English Learning Can Lead to More Inequity in China 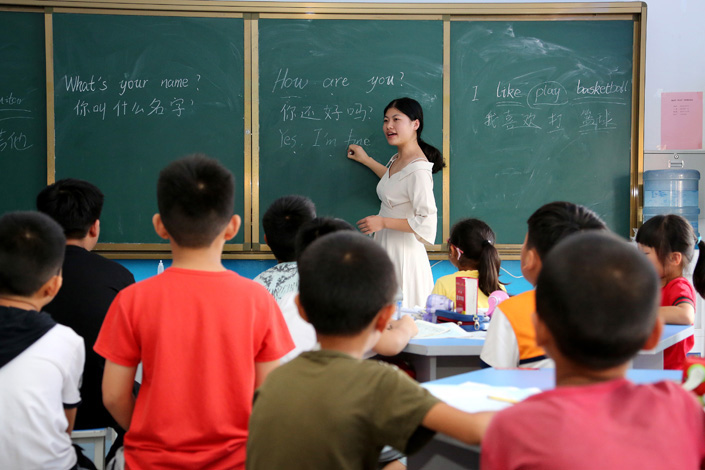 As I wrote before, only if “zhongkao” and “gaokao,” the respective entrance exams for senior high school and university, were to be reformed, it could fundamentally change the existing, ineffective examination-oriented education model and promote equality in education. However, reducing students’ burdens cannot be addressed simply by limiting classroom-based learning and banning after-school tutoring for certain subjects. In fact, this may even have the opposite effect.

Taking the subject of English as an example, if the measures are intended at downplaying the significance of English education, it would probably even exacerbate educational inequity.

Another way is to take a look at the content of the recruitment tests used by companies in their hiring process, which shows the skill set required by the employers. The fact is that very few employers require a Chinese or math test for employment. Instead, most of them use tests to assess candidates’ logical thinking and English proficiency. In the future, most of the top companies in China will have a presence in international markets and thus need to manage global teams. Promotions may be delayed or lost due to poor English skills.

And there is one more piece of evidence to prove that the marginal returns of learning English may be higher than that of other subjects — the vast and ever-increasing demand for English learning by adults who have no intention to study abroad. It is clear that, even without the pressure of school entrance exams, many people continue to believe that learning English brings a whole host of benefits and is essential to success in the future.

Many people say that a small percentage of Chinese people who can speak English is enough; therefore, there is no need for the majority to learn English.

But the world is becoming increasingly globalized, and English has become a universal language. Although China is the most populated country in the world, we still have to remember that the majority of world population is not Chinese. When China needs to further communicate with the world, improving our English proficiency is the best way to overcome language barriers.

In the future, whichever country is leading in the field of technology will be the superpower in the world. No country can pursue development behind closed doors. Therefore, it is essential to build a solid foundation in English since accurate Chinese translation may not be available for some of the new terminologies used in academic communication on an international level.

When it comes to culture and soft power, English is needed even more. There are definite limits to machine translation between English and Chinese. Hence, a universally spoken language is necessary to produce, for example, a mobile game or a film on a global scale.

One of the essential components of competitiveness for a country is the English-speaking proficiency levels of its citizens. If China hopes to see an increasing number of people visiting and studying in China, then citizens with a relatively higher level of English-language skills matter. It is crucial for China to make friends with countries all over the world, given the unfriendly attitude of the United States toward China. But how can we make new friends if we do not have a common language? Most of the time, English is the default choice as things might be lost in translation if it’s done by a machine.

Improved English proficiency would bring competitive advantages in the world’s technological and cultural competition, which can be seen from all the benefits English-speaking countries have.

Take Japan as an example. Japan is second only to the United States among the developed countries when it comes to economic scale and technological strength, surpassing English-speaking countries such as the United Kingdom and Canada. However, these English-speaking countries have a remarkable ability to attract foreign talents, way stronger than that of Japan. They also have headquarters of more multinational companies and institutions and are the home of more top academic institutions. Much of this competitive edge comes from having English as a native language. Non-native English-speaking countries where English language skills are highly valued include Singapore, the Netherlands, Switzerland, Germany and the Nordic countries. They also have a more globalized economy and are more competitive. Although its economy is lagging behind China’s, India has the capability to foster outstanding scholars and management experts, which seems to be relevant to the widespread knowledge of English in India.

Some argue that we can get people from all over the world to learn Chinese. That is, of course, just wishful thinking and would only be possible if China became the most significant economic power in the world. China’s population, which amounts to more than 10 percent of the world’s population, is far less than the total population of English-speaking countries. In particular, India, where English is used for official purposes, will soon overtake China in terms of population. And adding to the difficulty of Chinese replacing English as the global lingua franca, the number of newborns in China has plunged, accounting for less than 10 percent of newborns worldwide.

Others may argue that the scenarios mentioned above, where English is of great use, are relevant to high-end professionals or families only.

Downplaying English education in schools will also exacerbate social inequality. If quality English education is not available in school, then only children from richer families will have access to high-quality English education. For example, parents from these privileged families tend to have a higher level of English proficiency and can take their children on holiday abroad or enroll their children in international summer camps. On the other hand, children from average families (who may excel in other areas) will lack financial resources and opportunities to improve their English skills and will ultimately find themselves at a disadvantage when competing for management positions in the future. This would lead to economic inequality and undermine social mobility.

It should be stressed, however, that I am not arguing that “zhongkao” and “gaokao” must test students’ English level. In fact, I believe that China should abolish the current “zhongkao” and “gaokao” system, offer university education to everyone, and reduce the concentration of resources in a handful of top universities. What I am against is downplaying the importance of the subject of English.

One of the key arguments for downplaying English education is that learning English is expensive and used to be something that only the elite could afford. Learning English is not like learning math, where a smart poor kid can learn it all independently. It requires good teachers and a language environment. However, breakthroughs have been made by using the latest AI technology. Several English teaching companies are trying to embrace these new technologies, such as offering the best online courses open to all students and introducing chatbots (instead of real human beings) to simulate conversations with students. Unfortunately, as the entire private education sector in China declines after the policy change, these endeavors may cease as a result.

James Liang Jianzhang is the chairman and co-founder of online travel giant Trip.com Group Ltd. He is also a professor of economics at Peking University’s Guanghua School of Management.