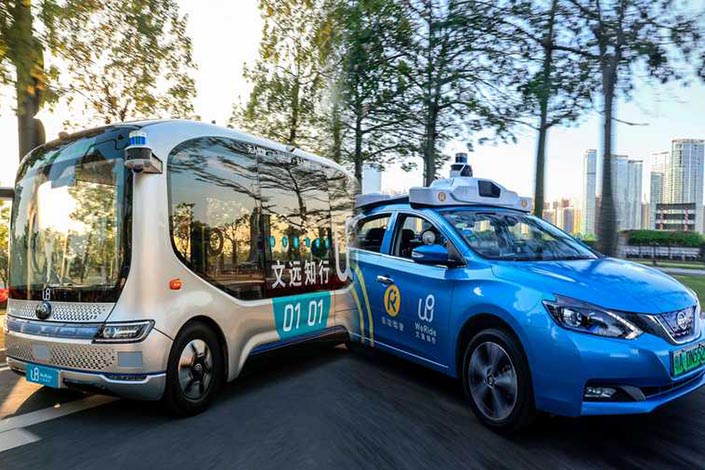 Trucks are seen as a low-hanging fruit in the pursuit of turning self-driving technology into a profitable business. Photo: weride.ai

Nissan-backed WeRide, a startup known for its robotaxi and robobus pilot programs in China, has inked a deal to create autonomous freight vehicles as it looks to bring more products to market.

Under the agreement, WeRide will provide autonomous driving software and hardware solutions, while JMC will manufacture the actual cars. ZTO Express will use the robovan for commercial operations in future.

When contacted by Caixin, a WeRide spokesperson declined to provide a timetable for the robovan’s mass production or commercialization, simply saying that the company would test and operate the autonomous logistics service in accordance with the relevant rules and regulations. She also said that backup drivers will be in place during tests to ensure safety.

The plan is for the WeRide Robovan to be equipped with Level 4 autonomous driving technology, enabling it to autonomously run in a variety of traffic conditions including city roads, tunnels and highways, according to the statement.

WeRide is one of several tech companies — including Baidu, Pony.ai and AutoX — working on Level 4 technology. The U.S. engineering standards group SAE International identifies this as being able to drive a vehicle under limited conditions, meaning that a human driver may sometimes need to take control. SAE classifies autonomous driving into six levels from zero to five with the top level allowing a car to run completely independently.

WeRide showed a clear interest in autonomous logistics in July, when it announced it had acquired Chinese self-driving truck startup MoonX.AI and would be bringing its team of about 50 algorithm and R&D engineers on board.

That takeover came two months after Toyota-backed rival Pony.ai, which is trialing robotaxi services in China and the U.S., said that its smart logistics subsidiary had obtained a license to conduct commercial autonomous freight operations in Guangzhou, the southern Chinese megacity where WeRide is headquartered. A Pony-ai spokesperson said that operations have since started.

Unlike passenger cars, trucks are seen as a low-hanging fruit in pursuit of turning self-driving technology into a profitable business because they tend to operate in less complex driving environments such as on highways.

Earlier this year in January, the Ministry of Industry and Information Technology issued a draft plan allowing eligible autonomous cars to apply for tests on highways.

Since November 2019, WeRide has been testing robotaxis in Guangzhou. In January, the company started testing its mini-robobus service in the southern metropolis, with plans to turn it into a paid service by the end of this year.