China Tech Stocks Stumble in Rush Back Toward Bull Market 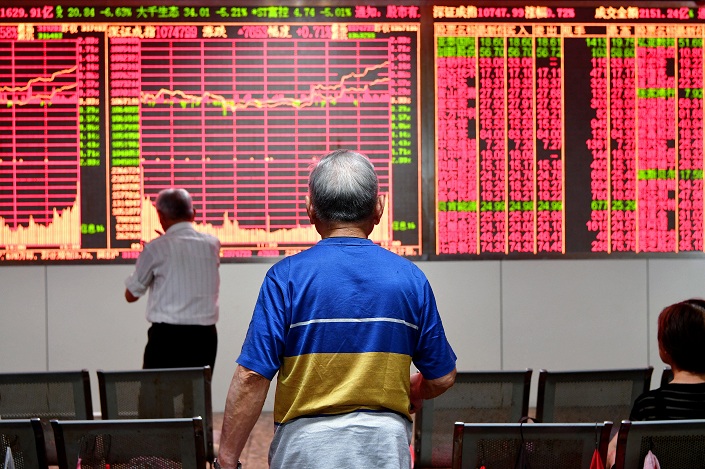 Traders monitor stocks at a trading hall in Jinhua, Zhejiang province, on May 15, 2018. Photo: VCG

(Bloomberg) — China’s embattled technology shares looked like the worst was behind them as they rallied toward a bull market this week — until Beijing took aim at gaming companies again.

After a six-month rout that wiped out almost half the market value of stocks on the Hang Seng Tech Index, the gauge had rebounded 17% from its August low by midweek. It seemed to be just a day or two away from reaching 20% and cementing a recovery in sentiment.

But then regulators hauled in gaming giants including Tencent Holdings Ltd. and Netease Inc. to reprimand them for putting profits ahead of their social responsibilities. That saw the index slump the most in six weeks on Thursday as traders questioned whether or not stocks had seen the bottom of the market.

“While a lot of the negative impact from recent regulatory fine-tunings appears to have been priced by the market, investors have remained extremely sensitive to any new announcements,” said William Yuen, investment director at Invesco Hong Kong Ltd. “We expect volatility to stay high for the sector in the short term.”

Investors are again torn between the risks and rewards of Chinese stocks, with some like billionaire George Soros warning it’s a “tragic mistake” to put money in the country, while behemoth money managers like BlackRock Inc. are pushing to scale up their mutual fund businesses.

Bargain hunters returned to the tech sector on Friday, pushing the industry gauge up 2.8% and keeping hopes of a bull market alive, after a newspaper report clarified that Beijing was slowing down instead of halting new game approvals.

Among other bullish signals, Vice Premier Liu He affirmed support for private enterprise this week, and last week President Xi Jinping said China would set up a new stock exchange in Beijing to provide financing for innovative smaller companies. The moves were read by Morgan Stanley that China is trying to restore investor confidence.

“These statements should be taken positively,” said Morgan Stanley analysts including Robin Xing in a research note dated Sept 7. “We think it is in China’s best interest to thrive as an economic super power, which will likely hinge on private-led innovation and foreign investment in the face of a structural savings decline amid an aging population.”

The long slump from the market’s February high has prompted companies in recent months to buy back their own shares, a move that typically helps restore investor confidence. The total value of share repurchases by Hong Kong-listed companies reached in August was the third most in data going back to 2005, Bloomberg-compiled data show.

Tencent and Xiaomi Corp. ranked among the top-10 companies for large buybacks during the market turmoil this year, according to the data. Xiaomi has bought back more than HK$5 billion ($643 million) worth of shares since July, while Tencent has conducted 13 buybacks since releasing its earnings in August, spending more than HK$1 billion.

Yet as Thursday’s selloff showed, investors will have to accept uncertainty for some time.

“These regulatory risks are inherently unpredictable and hard to price in with any real confidence” said Kyle Rodda, an analyst at IG Markets. “So it’s going to mean implied volatility remains relatively elevated, and I think that’ll keep price action pretty choppy.”