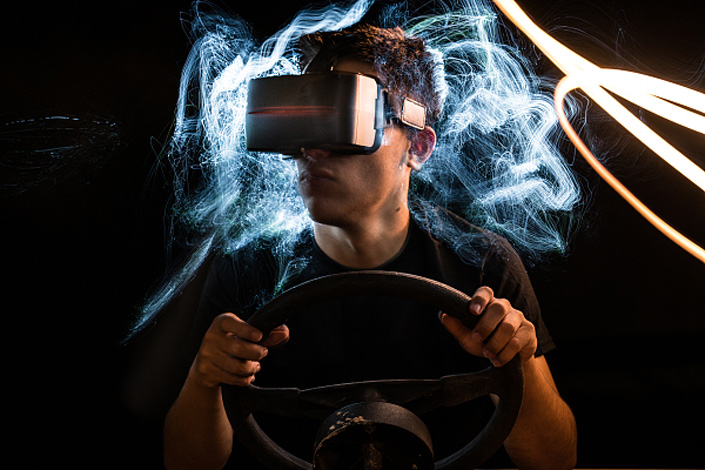 Metaverses are generally understood to be non-physical environments where people can meet up, visit buildings, buy goods and services, play sports and work together on projects, among other things. Photo: VCG

Two China-listed companies have seen their market values soar after announcing plans to work on “metaverses,” virtual shared spaces based on technologies like virtual reality (VR) and artificial intelligence, even though they have not provided details of how they are going to turn the concept into a reality.

Metaverses are generally understood to be non-physical environments where people can meet up, visit buildings, buy goods and services, play sports and work together on projects, among other things. Coined in the 1992 science fiction book “Snow Crash” by American writer Neal Stephenson, the concept has exploded in popularity during the Covid-19 pandemic as lockdown measures and work-from-home policies led to a surge in demand for online business and entertainment.

Compared with the start of the month, the market capitalization of online game developer Shenzhen Zhongqingbao Interaction Network Co. Ltd. and mobile internet firm Zhejiang Jinke Culture Industry Co. Ltd., both of which last week announced plans to enter the metaverse field, rose by 100% and 50% respectively on the back of strong investor interest in the concept.

On Sept. 6, Shenzhen-listed Jinke said that it has set up a special team to develop metaverse products given the fact that it has a customer base to do so, leading to a 20% jump in its shares on Sept. 8.

The surge caught attention of the Shenzhen Stock Exchange, which later sent a letter to Jinke urging the firm to substantiate its claims and asking if it played a part in boosting its stocks using the hot metaverse concept at a time when its controlling shareholder was selling its shares.

Zhongqingbao also made a similar statement on Sept. 6, when it announced a partnership with a liquor-maker to develop a metaverse game, in which players can make spirits virtually. But the firm admitted that it is “still in the initial stage” of exploring the business, which is a “big concept.”

An investor focusing on the gaming industry told Caixin on condition of anonymity that the metaverse concept has been hyped up, and that both VR software and hardware technologies are too immature to meet the expectations of prospective metaverse users.

The view was echoed by a VR content platform operator who described metaverses as “grand infrastructure projects” that need nearly all computer technologies, massive human resources and a large amount of money.

The metaverse concept covers a wide variety of technologies including VR, augmented reality, blockchain, artificial intelligence algorithms and computer graphics, among others.

Despite difficulties in R&D, the world’s tech companies still feel bullish about the future of metaverses.

The takeover came after its U.S. rival Facebook announced plans in July to create a product team to delve into metaverses, which CEO Zuckerberg likened to “an embodied internet, where instead of just viewing content — you are in it.”

In 2014, Facebook bought VR-headset maker Oculus in what was seen as a bid to develop new line of business alongside what it has done with its WhatsApp and Instagram mergers.

According to a report by CEC Capital, metaverses will be a focus point among companies in the social media, gaming and content sectors over the next 10 years, and the area is expected to mature by 2050.