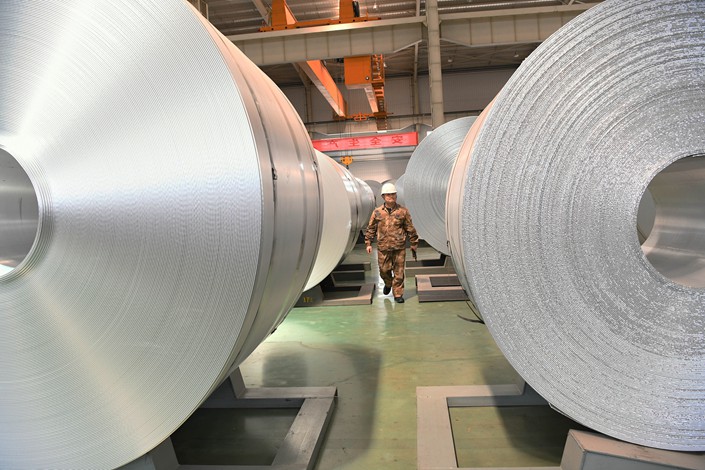 Aluminum reached $3,000 a ton in London for the first time in 13 years

By allocating to Yunnan and using local hydropower, aluminum projects become greener, and the province is transitioning from a green power supplier to an aluminum supplier. But the added power usage strained the province’s own supply, and forced it to cut the power supply in May.

The provincial government issued a circular Friday ordering strict controls on emissions and energy consumption by local industries. Producers of green aluminum, or low-carbon aluminum, should cap average monthly output between September and December below August levels, the statement said.

Aluminum reached $3,000 a ton in London for the first time in 13 years, reflecting investors’ growing concerns over policy risks affecting supplies from China to Europe, according to Bloomberg. In China, the metal surged as much as 5.4% to the highest since 2006.

Yunnan province, one of the largest aluminum-producing provinces in China, already took measures to curtail local aluminum output under the pressure of power shortages. In May, the provincial energy bureau ordered aluminum companies to reduce power consumption by 25%. The order, which was supposed to be lifted by the end of June, has remained in place.

In August, Yunnan’s aluminum producers ran at 70.57% of capacity, down 25 percentage points from the same period last year, according to Kunming Power Exchange Center. The overall operating capacity of major industrial power consumers in the province dropped 14 percentage points to 56.4% in August.

Nevertheless, Yunnan is still under great pressure to meet energy goals. In the first half, the province’s energy consumption and energy intensity —

the amount of energy used to produce a given level of output or activity — remained among the highest in the country.

The NDRC criticized local authorities for failing to meet carbon reduction commitments. Carbon dioxide is one of the most important greenhouse gases causing climate change. The commission ordered provinces including Yunnan to suspend any new projects with high energy demands except for certain major national projects.

According to the provincial government, six major industries in Yunnan consumed nearly 70 billion kilowatt-hours of electricity in the first seven months this year, up 19% from a year ago. The nonferrous metals industry accounted for 51% of the power usage.