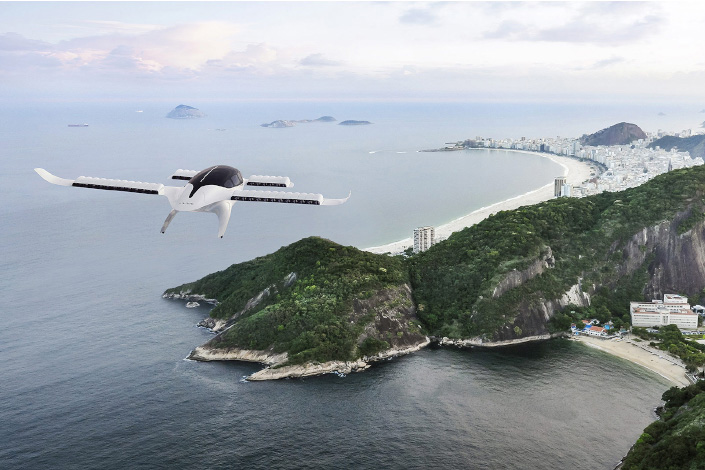 The future potential of the self-flying vehicle industry has also caught the attention of traditional aircraft manufacturers like Boeing and Airbus and automakers including Toyota, Geely and Xpeng. Photo: lilium.com

A Munich-based air taxi developer backed by Chinese tech giant Tencent Holdings went public in the U.S. this week after a merger with a blank-check firm, showing the Chinese tech giant’s strong interest in flying cars which some believe can revolutionize aerial transportation and logistics.

Lilium GmbH, the six-year-old German startup which is aiming to commercialize its electric vertical take-off and landing (eVTOL) vehicles in 2024, began trading on the Nasdaq on Wednesday, a day after it announced completion of its merger with a special purpose acquisition company (SPAC) named Qell Acquisition Corp., which is led by Barry Engle, the former president of General Motors North America.

A SPAC is a shell company that has no commercial operations but goes public with the intention of acquiring or merging with a real business seeking to list.

The transaction, which was announced in March, allowed the new company to secure approximately $584 million, some $450 million of which came from a private investment in public equity (PIPE) arrangement joined by a group of investors including Tencent, early Tesla investor Baillie Gifford and London-headquartered venture capital firm Atomico, according to Lilium. The company did not specify how much money each PIPE investor offered, but said that the SPAC deal gave the combined company a valuation of $3.3 billion.

It is not the first time that Tencent has poured money into Lilium, which is fundraising for the development of a seven-seat eVTOL that features a propulsion system using 36 individually controlled flaps, each containing an embedded ducted fan. The Shenzhen-based social media and gaming giant led two fundraising rounds for Lilium — one in 2020 and the other in 2017 — which raised around $330 million in total.

EHang Holdings Ltd., a Chinese startup which is pushing ahead an urban air mobility project that focuses on tourism, passenger transport, logistics and emergency rescue, is one of the world’s first developers of autonomous aerial vehicles that have cashed in on public capital markets to support growth.

The Guangzhou-based firm, which went public on the Nasdaq in 2019, has been testing its two-seat flagship self-flying people-mover EHang 216 in more than 10 countries including Estonia, Japan and Canada, with an ultimate goal to build and operate its own air mobility platforms using its products. But the firm has hit turbulence, including a short seller attack and widening losses.

In 2019, consulting firm Morgan Stanley predicted that accelerating tech advances and investment could help create a $1.5 trillion market of autonomous flying vehicles by 2040. “The intersection of many technologies, such as ultra-efficient batteries, autonomous systems and advanced manufacturing processes are spawning a flurry of activity in this space,” said Adam Jonas, head of Morgan Stanley’s Global Auto and Shared Mobility research team, in a note at the time.

The future potential of the self-flying vehicle industry has also caught the attention of traditional aircraft manufacturers like Boeing and Airbus and automakers including Toyota, Geely and Xpeng.

In July, Xpeng Heitech, a firm majority-owned by U.S. and Hong Kong-listed Chinese electric vehicle startup Xpeng unveiled the latest version of its two-seat flying car in Shanghai, which can fly with a maximum speed of 130 kilometers per hour (kph) at an altitude of between 300 meters and 500 meters.

On Thursday, Reuters quoted remarks made by Xpeng Heitech founder Zhao Deli at the World New Energy Vehicle Congress that the company plans to deliver its flying cars to customers in 2024.