By Yang Ge and Fang Zuwang 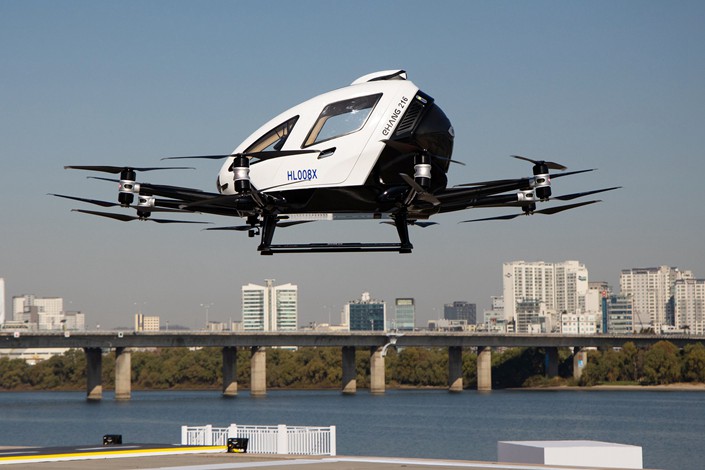 An EHang 216 autonomous aerial vehicle prepares to land during an event in Seoul, South Korea, on Nov. 11, 2020.

EHang Holdings Ltd., the Chinese startup that hopes to revolutionize short-distance transport with its self-flying vehicles, is getting an unwanted lesson on the aerodynamics of financial markets after a short-seller attack sent the company’s stock tumbling.

The Tuesday attack by Wolfpack Research sparked a selloff that saw EHang shares lose more than half their value, falling from $124.09 to end the trading day at $46.30 on more than 10 times its typical volume. The shares regained some ground after EHang issued its own response the next day. But at their Wednesday close of $77.73 they were still well below their pre-attack level.

“It seems like the company is a prime short target: products are very early stage and profitability hasn’t taken off yet,” said one analyst at a mid-sized brokerage, speaking on condition his name not be used due to company policy. “The allegations are concerning, and despite the company’s efforts to refute them, it wouldn’t be surprising if there was more turbulence ahead for the stock.”

Like many short sellers, Wolfpack alleged a wide-range of financial misconduct by the company in its lengthy report. Chief among those was its allegation that EHang’s relationship with its primary stated customer, Shanghai Kunxiang Intelligent Technology Co. Ltd., was “a sham.”

Previous EHang disclosures to the U.S. securities regulator show that Shanghai Kunxiang, just nine days after its founding, signed a purchase deal with EHang worth 450 million yuan ($70 million). Four months later it signed another deal worth 30 million yuan. Wolfpack pointed out that Kunxiang had registered capital of just 10 million yuan, adding its view that such a weak capital base would make it difficult for the company to execute the purchases reported by EHang.

Wolfpack added it had visited Kunxiang’s offices, where an employee said the company had made a 100 million yuan pre-IPO investment in EHang.

“EHang is an elaborate stock promotion, built on largely fabricated revenues based on sham sales contracts with a customer who appears to us to be more interested in helping inflate the value of its investment in Ehang, i.e. pump EHang’s stock price, than actually buying its products,” Wolfpack said. “We have gathered extensive evidence including behind-the-scenes photographs, recorded phone calls, and videos of on-site visits to EHang’s various facilities, as well as Kunxiang’s offices, which lead us to believe that Kunxiang signed sham sales contracts to benefit its investment stock price in EHang.

Short sellers like Wolfpack make money when shares of a company they target go down. They do that by borrowing shares of the company and selling them into the market, then waiting for the price to go down so they can buy them back for less and pocket the difference.

EHang raised a modest $40 million in its New York IPO in December 2019, and watched its shares largely stagnate for most of their first years of trading as investors remained unimpressed by a steady string of milestones for its autonomous air vehicles. But the stock suddenly came to life three months ago, and soared nearly tenfold between Dec. 1 and the release of the Wolfpack report.

A day after the report’s release, EHang came out with its own lengthy statement explaining its business and shooting down the allegations against it.

“The truth is that Kunxiang has never been a shareholder of EHang prior to our IPO, and to the best of our knowledge, after our IPO either,” EHang said. “The pricing and other terms offered by EHang to Kunxiang are not substantially different from those offered to other major customers in China and all contracts with Kunxiang are based on arm-length transactions.”

EHang sits alongside a small stable of other New York-listed Chinese companies engaged in new-concept transport whose shares have suddenly become investor darlings. Most of the others are money-losing electric car makers with names like Nio Ltd. and Xpeng Inc., whose high stock prices have also made them tempting prey for opportunistic short sellers.

Nio listed in late 2018 and its shares also largely stagnated after that, before catching fire and rising about tenfold since last June. Similarly, Xpeng, which listed midway through last year, has seen its shares double since November.

Perhaps most famously, the downfall of former Starbucks challenger Luckin Coffee also began last year with the publication of a short seller report that accused the company of massively inflating its sales — claims that were later found to be true by an internal company investigation.